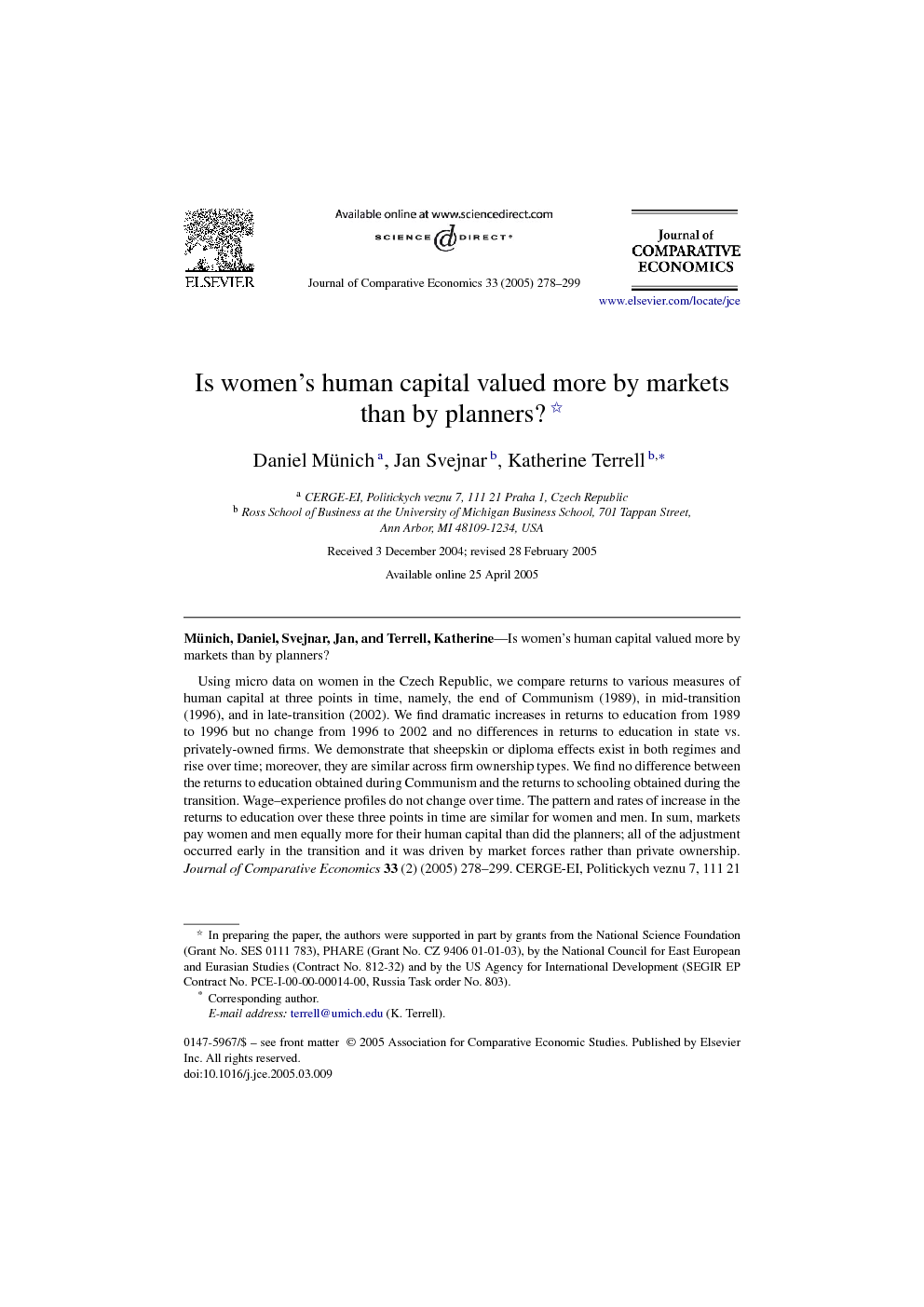 Using micro data on women in the Czech Republic, we compare returns to various measures of human capital at three points in time, namely, the end of Communism (1989), in mid-transition (1996), and in late-transition (2002). We find dramatic increases in returns to education from 1989 to 1996 but no change from 1996 to 2002 and no differences in returns to education in state vs. privately-owned firms. We demonstrate that sheepskin or diploma effects exist in both regimes and rise over time; moreover, they are similar across firm ownership types. We find no difference between the returns to education obtained during Communism and the returns to schooling obtained during the transition. Wage–experience profiles do not change over time. The pattern and rates of increase in the returns to education over these three points in time are similar for women and men. In sum, markets pay women and men equally more for their human capital than did the planners; all of the adjustment occurred early in the transition and it was driven by market forces rather than private ownership. Journal of Comparative Economics33 (2) (2005) 278–299.

Several authors investigate whether the overall gender wage gap has increased in transition economies.1 In this paper, we examine the extent to which markets pay women more for their human capital than did the planners. In addition, we consider whether the shift to market-based wages affected the return to the human capital of men and women equally and whether the results vary with firm ownership.2 To address these issues, we use data from special surveys from the Czech Republic and estimate women's returns to education and experience at the end of the Communist period, i.e., 1989 and at both six and twelve years after the start of transition, i.e., 1996 and 2002, respectively. We compare our findings to those in Münich et al. (2005) that estimates men's returns using the same data for 1989 and 1996 and we estimate men's returns in 2002. Finally, we compare our results to those in other studies of the changes in returns to human capital for men and women in other transition economies. In addition to increasing our understanding of gender differentials in the returns to human capital before and during the transition, our study contributes to the literature by examining returns to various measures of human capital. In particular, we examine the returns to actual years of schooling as a measure of education rather than to imputed years based on the highest degree obtained. We use the information on actual years of education and highest level attained for each individual to test for the bias from using imputed measures of schooling and to measure sheepskin effects, i.e. sharp increases in wages at the time a degree is received after controlling for years of education. We also test directly whether education obtained in the Communist period generates a different rate of return than schooling obtained during the transition period. Finally, we test whether market forces induce identical wage setting in all firms or whether rates of return on human capital differ across firm ownership. In particular, we compare the returns to human capital in the state sector with those in the private sector. We demonstrate that the Communist system maintained an extremely low rate of return to education for women. In addition, the first six years of the transition resulted in a major increase in the rates of return to a year of education and, surprisingly, the returns remained constant in the second six years of the transition. We find no significant difference in the returns to a year of education between the state sector and private sectors in either 1996 or 2002. With two exceptions, the same result holds for returns to the various levels of education. Hence, the major plan-to-market adjustment in rates of return to human capital occurred in the first six years of the transition. With respect to other measures of human capital, we show that the sheepskin effect was prevalent during Communism for vocational high school and university graduates. Between 1989 and 1996, the size of the coefficients increased considerably for both of these degrees; the coefficients became statistically significant and grew for an academic high school degree. Moreover, the 1996 sheepskin effects were replicated in the 2002 data and were virtually identical across ownership types. We demonstrate why earlier studies overestimated the rates of return to education by using years of education imputed from the highest degree obtained rather than actual years of schooling as an explanatory variable. Our estimates of the effects of experience on earnings indicate that the wage–experience profile of women was concave in both regimes and, on average, it did not change from the Communist to the middle and late transition periods. We find that education obtained after the Communist period does not have higher returns than education during Communism, for both 1996 and 2002, despite the fact that several changes were made in the education system and more women had the opportunity to study in the 1990s. Finally, we show that women and men experienced virtually identical changes in the returns to their education over this period, a pattern that is also found for several other transition economies. The paper is organized as follows. In Section 2, we describe the data and methodology. Section 3 contains the empirical findings on returns to traditional and non-traditional measures of education in 1989, 1996, and 2002. In Section 4, we examine the returns to experience in each of these three years and compare our findings on women to previous findings for men in Münich et al. (2005) and to the findings in the literature for other transition economies. Finally, in Section 5, we consider the broader implications of this work for understanding the impact of the transition to a market economy on wage setting.

Using micro data from the end of the Communist period, the middle of the transition, and late in the transition for the Czech Republic, we find that markets provide considerably higher education-related returns than planners. However, markets maintain the same return to human capital gained from experience in the labor force. Although the gender-earnings gap was reduced in the Czech Republic over this period from 33% in 1989 to 25% in 2002, this shrinkage can not be attributed to differences in the evolution of returns to education to men and women because we find these differences to be statistically insignificant. In addition, changes in the returns to education are similar for men and women in several other transition economies so that the market's valuation of human capital is not responsible for any changes in the gender-earnings gap in these countries either. Remarkably, the major increase in the rate of return to education occurs in the first phase of the Czech transition, from 1989 to 1996, and no further change is found in the later phase, from 1996 to 2002. Data for Czech men confirm this pattern and earlier studies from other transition economies suggest that this phenomenon is widespread. Moreover, we find that the major restructuring of the pattern of employment by industry, by firm ownership, and by firm size also occurred in the first, rather than in the second phase, of the transition. Unlike the lengthy process of adjustment in capital markets and corporate governance that involved substantial structural changes into the late 1990s and early 2000s, the labor market appears to have adjusted to the change of regimes relatively quickly. Our results indicate that the increase in returns to education is not due to differences in firm ownership, because the increase in the rate of return is similar in private and state sectors. Hence, returns to education are set by overall labor market competition rather than by firm ownership. Our estimates also contradict the hypothesis that education acquired under Communism is less appropriate for a market economy than education obtained during the transition. Either Communist education, which was always highly reputed internationally in areas such as mathematics and sciences, constitutes a good preparation for working in both economic systems or reforms in the educational system during the 1990s were limited in their impact on an individual's performance in the labor market. Finally, in both regimes, wages rise faster with extra years of education when the extra year conveys a certificate, i.e., the sheepskin effect. Hence, the shift to a market system is associated with a somewhat greater emphasis on completed education levels and degrees. In sum, markets pay women and men equally more for their human capital than did the planners; all the adjustment was made in the early part of the transition and it was driven by market forces rather than private ownership in the Czech Republic.