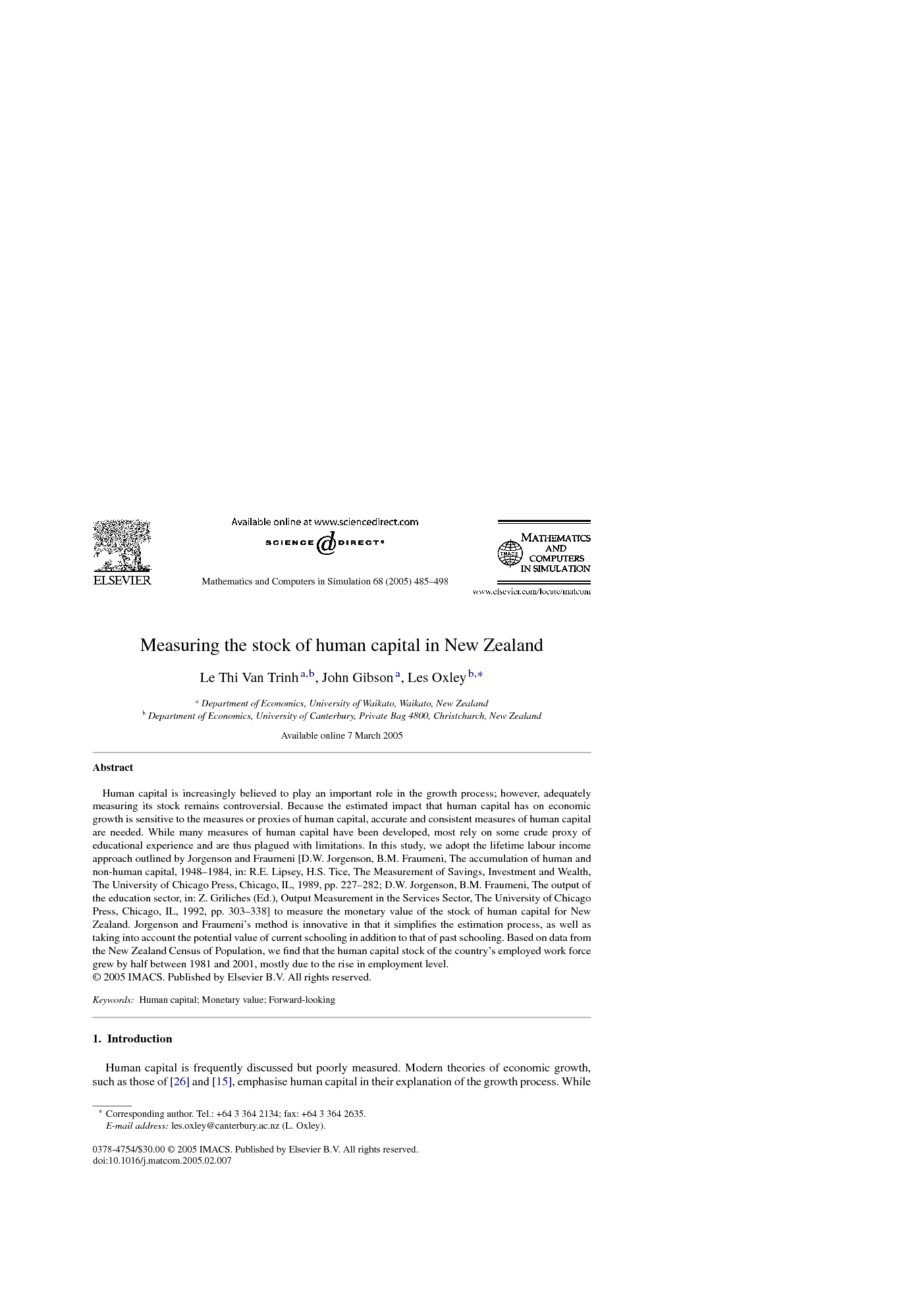 Human capital is increasingly believed to play an important role in the growth process; however, adequately measuring its stock remains controversial. Because the estimated impact that human capital has on economic growth is sensitive to the measures or proxies of human capital, accurate and consistent measures of human capital are needed. While many measures of human capital have been developed, most rely on some crude proxy of educational experience and are thus plagued with limitations. In this study, we adopt the lifetime labour income approach outlined by Jorgenson and Fraumeni [D.W. Jorgenson, B.M. Fraumeni, The accumulation of human and non-human capital, 1948–1984, in: R.E. Lipsey, H.S. Tice, The Measurement of Savings, Investment and Wealth, The University of Chicago Press, Chicago, IL, 1989, pp. 227–282; D.W. Jorgenson, B.M. Fraumeni, The output of the education sector, in: Z. Griliches (Ed.), Output Measurement in the Services Sector, The University of Chicago Press, Chicago, IL, 1992, pp. 303–338] to measure the monetary value of the stock of human capital for New Zealand. Jorgenson and Fraumeni's method is innovative in that it simplifies the estimation process, as well as taking into account the potential value of current schooling in addition to that of past schooling. Based on data from the New Zealand Census of Population, we find that the human capital stock of the country's employed work force grew by half between 1981 and 2001, mostly due to the rise in employment level.

Human capital is frequently discussed but poorly measured. Modern theories of economic growth, such as those of [26] and [15], emphasise human capital in their explanation of the growth process. While there is an empirical counterpart to this growth literature, the proxy measures of human capital used by authors such as Barro and Lee have attracted considerable criticism [27]. Few existing measures of human capital are in monetary terms. Moreover, even in countries where attempts are made to estimate the value of human capital, it is not yet standard practice for official statistical agencies to include human capital in their capital stock measures [29]. This is a surprising omission because estimates of the value of human capital predate the formal development of National Accounts statistics. For example, Petty [24], estimated the total human capital of England to be £520 million or £80 per capita, and Dublin and Lotka [9] also made important early contributions. Instead of placing a value on human capital, the more recent practice in economics has been to estimate human capital on the basis of years of schooling or formal educational attainment levels, regardless of actual productive capacity [22]. Barro and Lee [2], [3] and [4] provide prominent examples on this subject. In New Zealand, most published research on human capital has dealt with either changing prices – the returns to particular educational qualifications [19] – or changing quantities, such as the compositional shift implied by the rising importance of the “information workforce” [10]. There are also many studies that use proxy indicators within the educational stock approach, such as [28]. Because of the deficiencies in the educational stock-based approach, Jorgenson and Fraumeni [16] and [17] have returned to the earlier approach to valuing human capital, introduced by Farr [11] and Dublin and Lotka [9]. The basic idea, as will be shown in detail below, is to value the human capital embodied in individuals as the total income that could be generated in the labour market over their lifetime. These expected labour earnings contribute to an extended notion of capital, which Jorgenson and Fraumeni include in a proposed new system of national accounts for the US economy. Outside the United States, this method has been applied to the estimate the human capital stock for Sweden [1] and Australia [29], both of which studies find the stock of human capital to greatly exceed that of physical capital. In this paper we modify the formula outlined by Jorgenson and Fraumeni [16] and [17] and Wei [29] to place a value on the stock of human capital of the employed work force for New Zealand. We focus only on those individuals in employment, since these people are directly participating in economic production and so their human capital is arguably a better measure of the country's productive capacity. Our estimates are based on the discounted present value of expected lifetime labour market incomes. Thus, our study is an example of a forward-looking (or prospective) method of measuring human capital. Such methods contrast with backward-looking (retrospective) methods based on cost of production concepts, and with the widely used educational stock approach. In the empirical part of the paper we work mainly with New Zealand Census of Population data from 1981–2001 to calculate the future stream of incomes that a worker of a given age, gender and education level can expect to earn. This expected income is based on cross-sectional age–income profiles, which are then combined with the probability of enrolment in further education (allowing the worker to “jump” from one profile to another), the probabilities of participating in the labour force and of continued employment, and age-specific mortality rates. After incorporating expected growth rates, following [21], and a discount factor, it is possible to calculate the present value of lifetime income, for a person of a given gender and education level. When these per capita estimates are combined with information on the population size of each cohort, the aggregate value of human capital can be calculated. Of course, these estimates relate only to market income so the value of human capital stocks used in non-market production may be missed, but such a restricted focus is also common in studies measuring the returns to education.

As is clear from Table 1, degree-qualified people have increased both in number and proportion of the working age population. Any education-based measure of human capital would suggest that New Zealand human capital has grown steadily in the last 20 years. Another question hence springs up: did human capital actually decrease in 1986 and 1991 or was it just due to the bias in the Jorgenson and Fraumeni method? Unlike the education-based measures of human capital, the lifetime labour income-based approach does not estimate human capital by counting how much education the population has. Being labour market-oriented, this method argues that the knowledge and skills that are not used in economic activities are useless. Accordingly, educating people is not sufficient to raise the country's stock of human capital; it is necessary that those people be employed so that the knowledge and skills that they have acquired are turned into productive capital rather than being wasted through unemployment and non-participation. The Jorgenson and Fraumeni approach is based, as are other labour income-based methods for measuring human capital, on the assumption that differences in wages perfectly mirror differences in marginal productivity of labour and that productivity is a proxy for human capital. If wages vary for reasons other than changes in productivity, the results obtained from this method will be biased. Indeed, there is evidence that actual real wages diverged from “warranted” real wages. Pre-reform real wages were believed to be overvalued because they were traditionally set on the basis of occupational relativities rather than on productivity. Some authors, including Grimes [13] and Reserve Bank of New Zealand [25] assert that real wage overvaluation was a major cause of rising unemployment. The presence of effective legislated wage floors, which can be as high as 53% of average earnings, also indicates that wages may reflect equity considerations rather than market conditions. Besides, in an attempt to fight inflation, a price and wage freeze was introduced in June 1982. Real wages then declined for the next 3 years and this appeared to be part of the reason why real labour earnings in 1986 were so low. Real wages continued to trend downward until 1990 although this trend has been slightly reversed in the second phase of the reform. Despite rising productivity, real wages fell in the first phase of the reform to ease the pressure on high unemployment at that time [8]. According to the data gathered by Maloney and Savage [20], productivity grew rather steadily during 1981–1994 while real wages experienced considerable fluctuations over the period. So apparently the assumption that wages reflect labour productivity does not always hold in reality. The fact that the equality between wages and labour productivity fails to hold casts doubts on the results of this study. If labour productivity is a good proxy for human capital, the rising productivity means that during 1981–1991, New Zealand human capital may have decreased in per capita terms to a lesser extent than indicated by the labour income-based measure. This may suggest that a measure of human capital based solely on labour productivity should be less biased. However, by being indices, a productivity-based measure of human capital is not always a superior solution. The labour income-based measure gives a monetary value which is more meaningful than indices in comparisons with other types of capital or with human capital from other countries. Also, the labour income-based approach is based on an assumption which, however controversial, is widely accepted in economics and which tends to hold reasonably well in the long term. Therefore, the lifetime labour income method has many merits of a good measure of human capital after all, in spite of the imperfections. But there are still a few other issues around the lifetime labour income approach to measuring human capital. Omitted variables obviously create a bias, since it has been well established in labour economics that sex, education and age are not sufficient to explain differences in earnings. Several important factors, including ability, family background, quality of schooling, and work experience, have been left out of the model. However, we would argue that this bias matters more to the results for individuals and cohorts than to the population's aggregate results. A bigger concern with this approach is that the range of possible factors that affect workers’ earnings over their lifetimes is extensive. Therefore, it may not be so realistic to assume that earnings in n years of the cohort aged a are equal to the current earnings (adjusted for economic growth) of the cohort now aged a + n who share the same education and sex. Women contribute disproportionately less to the stock of human capital. But this does not necessarily mean that women's capital is less valuable than men's; it merely reflects the fact that women do not participate as much as men in labour market activities. If non-labour market activities were accounted for, women's human capital should be more highly valued. Yet the way that Jorgenson and Fraumeni impute non-labour market activities has attracted considerable criticism. Hence, how to appropriately take account of non-economic human capital remains challenging. Finally, our results are preliminary and reflect some of the modelling assumptions that the imperfect New Zealand data necessitate. Future work should examine the effect of educational enrolment on the stock of human capital, when adequate data on enrolment are available. Given the current activity of other researchers in the area of measuring and valuing human capital stocks, we are optimistic that some consensus about the value of the human capital stock may soon emerge.