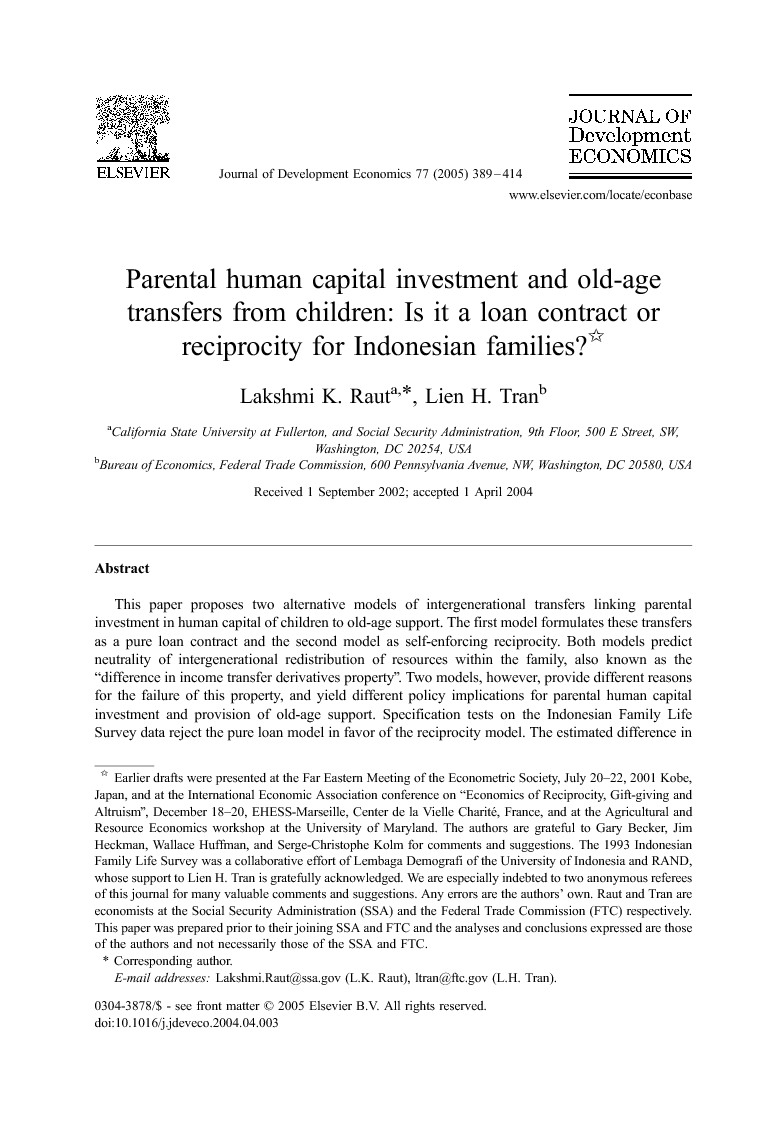 This paper proposes two alternative models of intergenerational transfers linking parental investment in human capital of children to old-age support. The first model formulates these transfers as a pure loan contract and the second model as self-enforcing reciprocity. Both models predict neutrality of intergenerational redistribution of resources within the family, also known as the “difference in income transfer derivatives property”. Two models, however, provide different reasons for the failure of this property, and yield different policy implications for parental human capital investment and provision of old-age support. Specification tests on the Indonesian Family Life Survey data reject the pure loan model in favor of the reciprocity model. The estimated difference in income transfer derivatives for this data is found to be significantly higher than the difference estimated by Altonji, Hayashi and Kotlikoff Altonji et al. (1992) [Altonji, J.G., Hayashi, F. and Kotlikoff, L.J. (1992). Is the Extended Family Altruistically Linked? Direct Tests Using Micro Data. The American Economic Review, vol. 82(5): 1177–98.] for the U.S. PSID data.

In Becker's model (1974) of resource transfers from parents to children, parents are altruistic towards children but children are selfish. An important implication of this model is that if parents transfer positive amount of resources to their children, publicly provided intergenerational transfer programs that marginally redistribute resources from children to parents are neutralized by an increase of private transfers from parents to children that exactly offset such public transfers. For a given total family income, the distribution of income within family is irrelevant for consumption and transfer decisions taken by individual family members. More specifically, decisions taken by an altruistic household head who makes positive transfers to other members will coincide with decisions taken by family members themselves. More formally, let Ek be the income of the child, Ep be the income of the parent, and T be the positive transfer from parent to child. Parental altruism will imply the difference in income transfer derivatives property View the MathML source∂T∂Ep−∂T∂Ek=1, first derived formally by Cox (1987). Altonji et al. (1997) formally estimated this difference using PSID data in the U.S. and found it to be around 0.13 instead of 1 as predicted by altruism models. Other studies offer mixed evidence on altruistic transfers within the family. Behrman et al. (1982) formulated an alternative model of altruistic transfers in which parents make transfers to children to offset their children's earnings inequality. McGarry and Schoeni (1995) found that parents give more to less well off children and elderly parents, suggesting that such transfers are not motivated by exchange motives. However, Altonji et al. (1992) and Hayashi (1995) found that the distribution of resources within the family affects the distribution of food consumption, rejecting the hypothesis that the extended family is altruistically linked. To test the exchange motive for transfers, some studies explicitly model transfer of resources from parents to children as exchange of money for non-market services received from children. In Bernheim et al. (1985) bequest is modeled as strategic exchange for children's services, such as visits in old age. Other studies, Cox (1990), Cox and Rank (1992), found that money transfers are correlated with services received such as child care, and interpreted this as evidence of quid-pro-quo exchange in intra-family transfer behavior. Another possible motive for parental transfer to children that has received little attention in the literature is investment in children's education to receive old-age transfers. In a theoretical model of parental investment in children's education, Becker et al. (1990) extended the quality–quantity model of parental human capital investment to an overlapping generations growth model in which such investment in children is motivated by parental altruism. However, in this model, parental transfers could not be linked to transfers from children because agents live only during one period. In an alternative overlapping generations growth model (Raut, 1990), parental investment in children's human capital is explicitly motivated by the amount of transfer anticipated from children during old-age. But the amount of transfer from children to parents is determined exogenously by social norms or other enforcement mechanisms.1 Using Indonesian data, Lillard and Willis (1996) found that transfers from children to parents are positively correlated with children's education level and interpreted this as evidence that parental educational investment in children is paid back during old age, thus ensuring parental old age security. In this paper, we consider alternative models of parental investment in children's education, and test them directly using the Indonesian Family Life Survey (IFLS) data set. In the next section, we formulate two models of parental human capital investment and old age transfer from children. In both models, two-sided altruism plays a significant role. In the first model, the pure loan model, parents determine both the schooling loan amount to children and the level of transfer from children in old-age. Children are passive recipients of the loan contract, as long as they are not made worse-off by the terms of the contract. This approach presumes that there are cultural and social norms that enforce such inter-generational contract. By contrast, the second model of transfers is based on reciprocity with each child autonomously deciding how much to transfer to parents rather than making the transfer to conform to social or cultural expectations as in the pure loan model. In the second model, the level of parental investment in children's education and the amount of transfer from children to old parents are determined simultaneously in Nash equilibrium. We study the properties of the optimal solution and derive the difference in income transfer derivatives property in each model. We then derive testable restrictions on the estimation equations to differentiate the two models empirically. Section 3 discusses and compares our estimation strategy with the approach taken by Altonji et al. (1997). Section 4 describes the data and variables in this study. Section 5 reports the main empirical results. Section 6 concludes the paper.

In this paper, we have considered two models of intergenerational transfers. The first model treats parental investment in children's education as a loan with the terms of repayment set by parents. In this framework we considered the loan contracts both with and without two-sided altruism and carried out specification tests to choose between the two. Our specification tests rejected the no-altruism case in favor of the two-sided altruism case. In the second model, parents decide how much they want to invest in children, and children decide how much to pay back. In this model, the two-way transfers are determined by reciprocity with two-sided altruism. We have shown that distinguishing between the two models is relevant for education and old age pension financing policies and derived testable parameter restrictions to test which of the two models explains the data better. We find the number of children to be a significant determinant of the level of human capital investment that parents make for each child. This lends support to the reciprocity with two-sided altruism model, since this variable is irrelevant for the education of a child under the pure loan model. Our highest estimate of 0.956 for the difference in income transfer derivatives using the Altonji–Ichimura flexible functional form is close to 1, as predicted by altruistic models of intergenerational transfers. This stands in sharp contrast with estimates of 0.13 or less found by Altonji, Hayashi and Kotlikoff. Thus, our combined findings on the determinants of upward and downward transfers and on the magnitude of the total effect of incomes transfer derivatives, coupled with the robustness of our results to the samples used lend support to the reciprocity with two-sided altruism. These results suggest that parental investment in children's education and the voluntary amount of old-age support received by parents are both less than optimal. An appropriately designed social security program that uses the social security tax proceeds to finance children's education and pay for the benefits of the old could improve growth in incomes and welfare of both generations. Furthermore, evidence that parents are liquidity constrained in making human capital investment in children calls for improving efficiency in capital markets. However, we recognize that there may be other channels through which parental incomes and education, in particular mother's education, determine children's education, which may call for other types of policy interventions. This invites further research into this area.