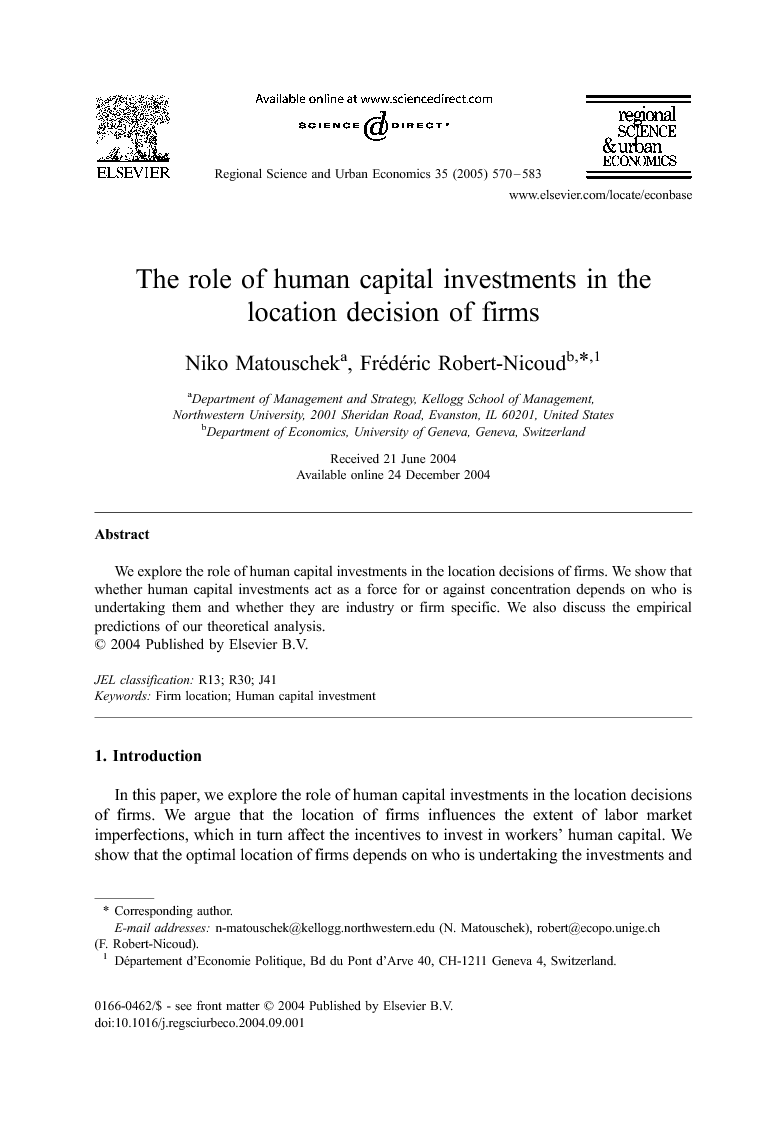 The purpose of this paper was to analyze the role of human capital investments in the location decisions of firms and to caution against the view that human capital investments always act as a force for spatial concentration. The model we developed is stylized and simple. This allows us to highlight important, basic economic forces and analyze their effect on the location decisions of firms. Also, in spite of its simplicity, the model generates a number of hypotheses that are empirically testable. First, if human capital investments are industry specific, we would expect firms to be less concentrated if they, rather than the workers, are making the investments. Second, we would expect industries to be less concentrated if workers can make firm-specific investments than if they can only make industry-specific investments. Straightforward extensions of our model can provide additional testable implications. Suppose, for instance, that workers can make both industry-specific and general-purpose investments. We would then expect industries to be concentrated but located away from other industries. This induces workers to invest in the useful industry-specific skill and not waste effort acquiring general-purpose skills that they do not use. In the case of the accordion industry, this suggests a reason why this industry is not only very concentrated but also located far away from other industries (a typical pattern, for instance, for the Italian ‘industrial districts’). The difficulty with actually testing the hypotheses of this model is that location and human capital investments are both endogenous. One possible solution to this problem may be to exploit the exogenous differences across countries with regards to legislation that obliges firms to provide training for their workers. For instance, the model would predict that in countries such as Germany, in which firms are obliged to provide some general training, firms are more dispersed than in countries in which this obligation does not exist.11 The model could be extended in a variety of ways. For instance, one could relax our stark assumptions about the labor market by modeling labor market competition more explicitly. Also, it would be interesting to endogenize the specificity of the investments. Finally, one could analyze how the location of firms affects their willingness to pay for worker trainings.12 We leave these extensions for future research. To conclude, we believe that labor market considerations play a potentially important role in the location decisions of firms. We hope that the above analysis sheds more light on these issues and will lead to future empirical research that further evaluates their importance.