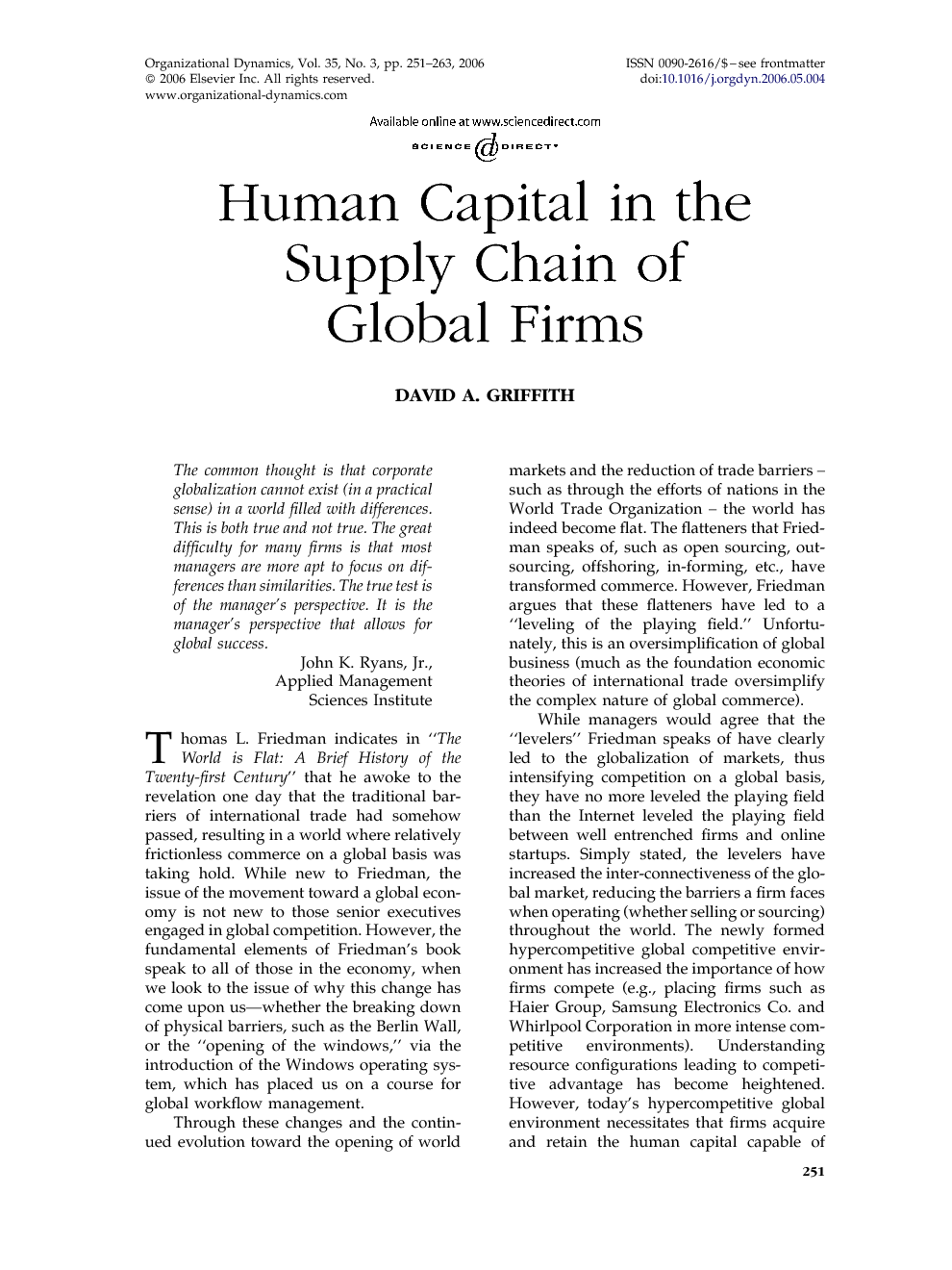 Thomas L. Friedman indicates in “The World is Flat: A Brief History of the Twenty-first Century” that he awoke to the revelation one day that the traditional barriers of international trade had somehow passed, resulting in a world where relatively frictionless commerce on a global basis was taking hold. While new to Friedman, the issue of the movement toward a global economy is not new to those senior executives engaged in global competition. However, the fundamental elements of Friedman's book speak to all of those in the economy, when we look to the issue of why this change has come upon us—whether the breaking down of physical barriers, such as the Berlin Wall, or the “opening of the windows,” via the introduction of the Windows operating system, which has placed us on a course for global workflow management. Through these changes and the continued evolution toward the opening of world markets and the reduction of trade barriers – such as through the efforts of nations in the World Trade Organization – the world has indeed become flat. The flatteners that Friedman speaks of, such as open sourcing, outsourcing, offshoring, in-forming, etc., have transformed commerce. However, Friedman argues that these flatteners have led to a “leveling of the playing field.” Unfortunately, this is an oversimplification of global business (much as the foundation economic theories of international trade oversimplify the complex nature of global commerce). While managers would agree that the “levelers” Friedman speaks of have clearly led to the globalization of markets, thus intensifying competition on a global basis, they have no more leveled the playing field than the Internet leveled the playing field between well entrenched firms and online startups. Simply stated, the levelers have increased the inter-connectiveness of the global market, reducing the barriers a firm faces when operating (whether selling or sourcing) throughout the world. The newly formed hypercompetitive global competitive environment has increased the importance of how firms compete (e.g., placing firms such as Haier Group, Samsung Electronics Co. and Whirlpool Corporation in more intense competitive environments). Understanding resource configurations leading to competitive advantage has become heightened. However, today's hypercompetitive global environment necessitates that firms acquire and retain the human capital capable of effectively developing marketing and management strategies capitalizing on resource advantages in the new global environment. Nowhere is this more notable than in the operations of the firm's global supply chain. In this article, it is argued that the human capital a firm employs in its global supply chain allows the firm to take advantage of the global flatteners. This is to argue that Friedman's hypothesis that the flatteners have created a level playing field overstates the nature of the global business environment. Rather than these flatteners leveling the playing field, they have set the stage for firms to compete more fiercely, thereby enhancing the competitive advantage of those firms embodying the human capital capable of leveraging this newly charged environment. The focus here is on the human capital necessary for firms to operate aggressively in the global marketplace, taking advantage of the flatteners to maximize value delivered to a wide variety of firm stakeholders. To this aim, we (1) address the importance of human capital for global supply chain competitiveness, (2) delineate dimensions of human capital that firms need to accumulate within the firm's global supply chain to compete in this new environment, and (3) discuss how the explicated human capital dimensions advance global supply chain strategies for success in a dynamic global business environment.

Friedman's contention that we are operating in a flatter world is correct. However, it is argued here that firms challenged with operating in this environment must recognize that the levelers have not made the playing field equal for each firm. The playing field has been leveled by increasing the need to focus on the human capital (and constraining managerial mindsets) of the supply chain personnel that the firm employs. This article has argued that human capital is the foundation for business success in the flat world. Through the embodiment of human capital in the firm's global supply chain the firm is able to compete. However, it is argued that global competitiveness is constrained by the mindsets that supply chain personnel operate under, as well as the degree of analytical and social capital possessed. It is argued that through a four-step assessment procedure, firms can assess and appropriately match supply chain personnel to specific jobs, thereby increasing their global competitiveness. It is argued here the importance of the individual is key to effective supply chain operations. Finally, it is recognized that the capital dimensions enumerated here are but a few of the human capital dimensions that can lead to competitive advantage. However, it is hoped that this discussion can serve as a starting point to recognizing the interaction between mindset, human capital and global competitiveness in an increasingly competitive global marketplace.