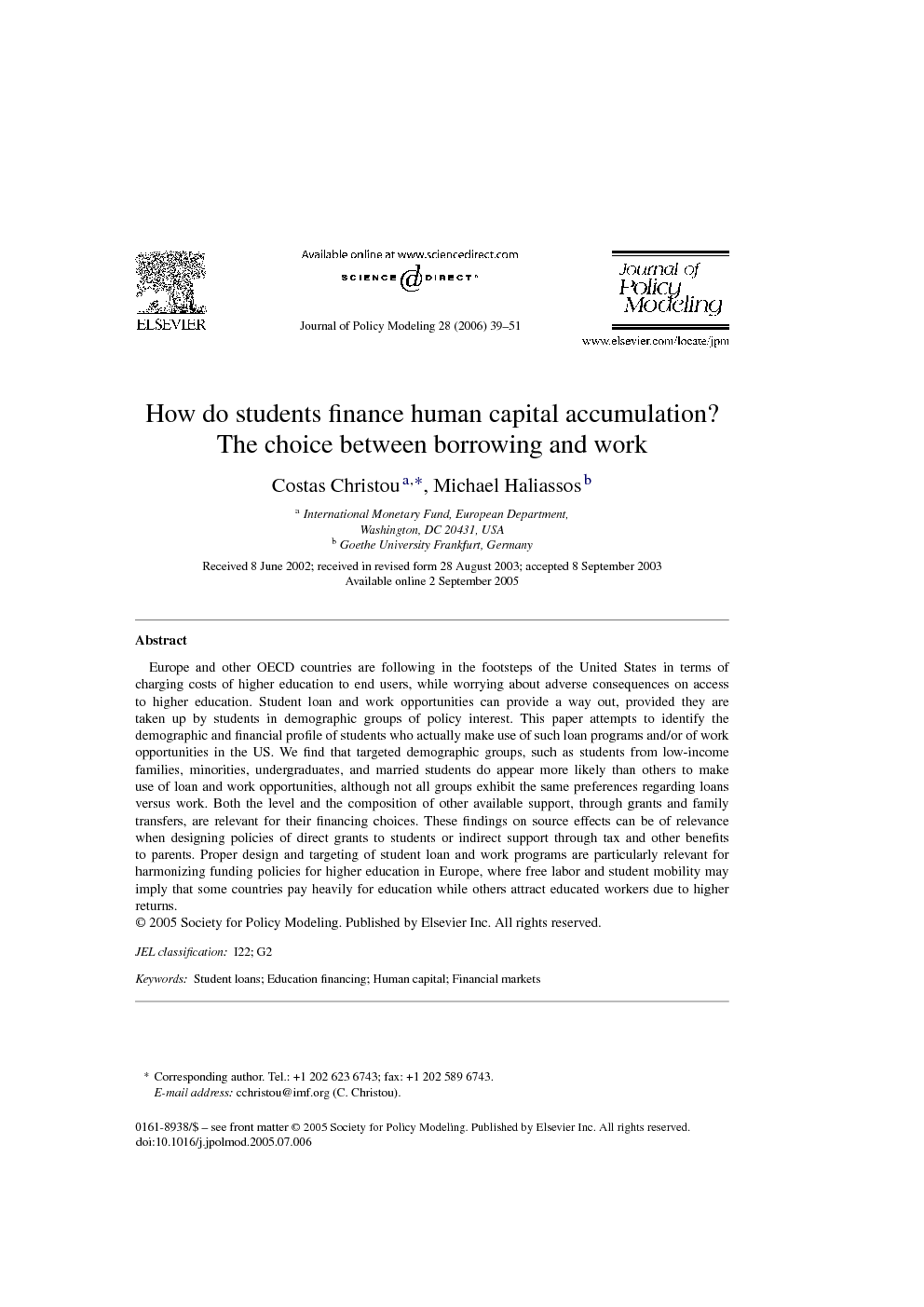 Europe and other OECD countries are following in the footsteps of the United States in terms of charging costs of higher education to end users, while worrying about adverse consequences on access to higher education. Student loan and work opportunities can provide a way out, provided they are taken up by students in demographic groups of policy interest. This paper attempts to identify the demographic and financial profile of students who actually make use of such loan programs and/or of work opportunities in the US. We find that targeted demographic groups, such as students from low-income families, minorities, undergraduates, and married students do appear more likely than others to make use of loan and work opportunities, although not all groups exhibit the same preferences regarding loans versus work. Both the level and the composition of other available support, through grants and family transfers, are relevant for their financing choices. These findings on source effects can be of relevance when designing policies of direct grants to students or indirect support through tax and other benefits to parents. Proper design and targeting of student loan and work programs are particularly relevant for harmonizing funding policies for higher education in Europe, where free labor and student mobility may imply that some countries pay heavily for education while others attract educated workers due to higher returns.

Recent policy debates on higher education have focused on two apparently conflicting policy objectives. On the one hand, OECD governments stress the importance of promoting access to higher education by wider segments of the population.1 On the other, governments seem reluctant or unable to fund increased or even current levels of access through public support to Universities.2 Faced with politically pressing alternative uses for public funds, governments increasingly favor charging end users of educational services, especially since the largest part of the return to higher education is estimated to be private rather than social. If anything, globalization and European integration intensify such tendencies. As Guille (2001) points out, lack of harmonization of EU funding policies for higher education, combined with free mobility of students and workers could result in students studying in countries where their financial contribution is more limited and then working in countries where returns are highest. Given these considerations, there is increasing support for the view that European countries should rely more heavily on student fees, preferably differentiated by institution, rather than on public funding for financing higher education.3 However, if increased reliance on student fees is to be reconciled with the policy objective to improve access to higher education, students ought to be given adequate opportunities to finance their education through loans and/or part-time work, in addition to any help provided through grants and through support from parents, spouse or other relatives. This has actually been the choice in the United States, which faced similar policy dilemmas earlier on. Student loan programs and part-time work opportunities are indeed becoming increasingly important throughout the world. Albrecht and Ziderman (1993) identify fourteen programs in industrial countries, twenty in Latin America and the Caribbean, eight in Asia, four in the Middle East and Northern Africa, and seven in Sub-Saharan Africa, many of which were established in the 1980s.4 More recently, Guille (2001) surveyed student financial aid programs in Europe and noted that more than half of the European countries studied, provide loans as part of total financial aid to students, while the proportion of beneficiaries varies from 10% to 80% of students. Still, making loan schemes and work opportunities available does not automatically improve access to higher education, as there is no guarantee that these will be taken up by students belonging to demographic groups of policy interest. Who uses the programs is not only a function of government intentions and provisions to promote access, but also of the ability and willingness of students to understand and to take advantage of these opportunities.5 It is also not clear a priori how participation in loans and work is influenced by the size and composition of other types of financial support to students, e.g. grants and family support. The presence and nature of any compositional effects is particularly topical in Europe, where countries seem to be divided among those which favor policies of direct (grant) support to students versus those favoring indirect support from family encouraged by child allowances and tax credits (Vossensteyn, 1999). This paper brings to bear on these questions comprehensive microeconomic data from the United States, a country with considerable experience in combining student fees with innovative financial support policies intended to promote access to higher education. We study the role of demographic factors and of the level and composition of other support (from grants, parents, spouse, and other relatives) in determining whether students do take up loan and work opportunities, either in isolation or in combination. Loans gained considerable importance in the United States in the early 1980s (Reyes, 1994), and currently the majority of student loans are undertaken through government programs.6 Percentages of US students working and hours of work were already high in the early 1980s (Christoffel, 1985), and by 1986 about two thirds of students worked, with the majority working more than twenty hours per week. Our data come from the 1987 National Postsecondary Student Aid Survey that incorporates a broad range of postsecondary education programs in the US, students in different stages of each program, and information on different components of student financing portfolios. Most of the limited empirical research on student loans and on work has examined these two supplementary financing choices in isolation and has focused on different issues. 7 We find that, in addition to demographics and to the size of other financial support from grants or relatives, the composition of such support matters for participation in loans and work. Source effects have also been found, in a different context, in the literature on state and local government expenditures in response to intergovernmental grants. 8 Section 2 presents the model and estimation procedure. Section 3 presents results for the entire sample. Section 4 focuses on low-income students, and Section 5 concludes. The appendix defines the variables.

Europe and other OECD countries seem to be following in the footsteps of the United States in terms of charging costs of higher education to end users in the form of tuition fees, while worrying about adverse consequences on access to higher education. Student loan and work opportunities can provide a way out of this policy dilemma provided they are taken up by students in demographic groups of policy interest. This paper uses data from the United States to estimate the role of student characteristics and of the level and mix of available support through grants and gifts from parents, spouse, and relatives in determining whether loan and work opportunities are taken up, either alone or in combination. We have presented a number of results on the relevance of demographic characteristics. Our overall conclusion is that targeted demographic groups, such as students from low-income families, minorities, undergraduates, and married students do appear more likely than others to make use of loan and work opportunities, although not all groups exhibit the same preferences regarding loans versus work. For example, being older or coming from a family with college-level education tends to encourage use of work opportunities; coming from a low-income family tends to encourage use of loans. We have found both the level and the composition of other support available to students relevant for their financing choices. A dollar of extra support coming through a direct grant to the student, or through parental support, or through a contribution by the spouse is estimated to have different influence on the financing choices of students. These findings on source effects can be of relevance when designing policies of direct grants to students or indirect support through tax and other benefits to parents. The above conclusions from the US experience could be used as a guide for policy design in other countries. In general, one would expect that there are differences in student characteristics even between advanced European countries and the United States. For example, proportions of dependent students, minorities, and older or married students are likely to differ across countries, and the same is true of the level and composition of other support available to students. However, econometric estimation of the role of various student characteristics and of each type of other support takes a step in the direction of allowing policy makers to make more informed assessments of who is likely to take advantage of student loan and work programs when they are implemented in their own country. Ultimately, European Union countries have to solve an even more difficult policy problem than the one faced by the United States. In addition to balancing the need for tuition fees with satisfactory access to higher education in their own country, they need to harmonize educational finance policies so as to avoid subsidizing the education cost of increasingly mobile European citizens only to lose them to countries offering higher returns.