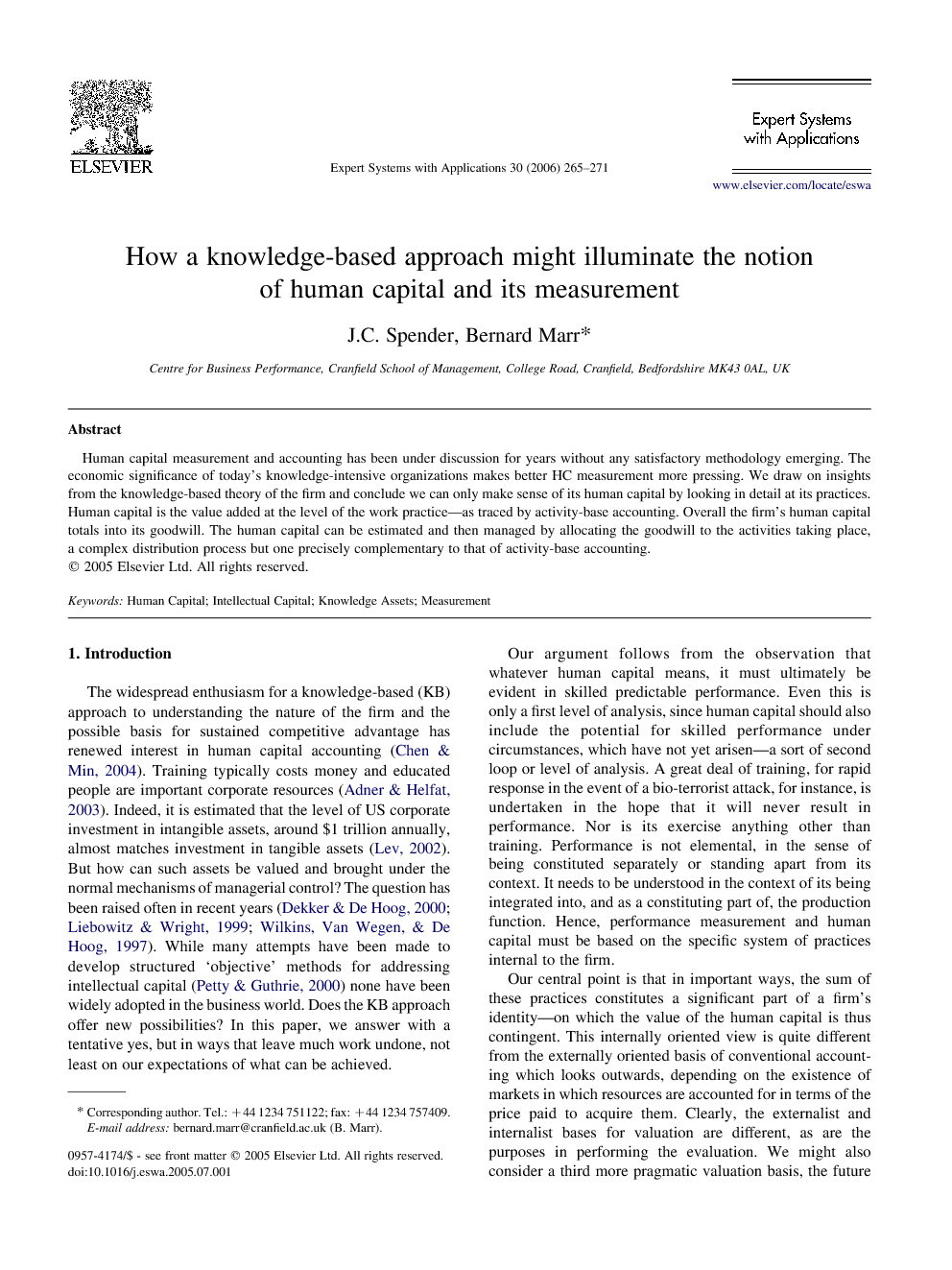 Human capital measurement and accounting has been under discussion for years without any satisfactory methodology emerging. The economic significance of today's knowledge-intensive organizations makes better HC measurement more pressing. We draw on insights from the knowledge-based theory of the firm and conclude we can only make sense of its human capital by looking in detail at its practices. Human capital is the value added at the level of the work practice—as traced by activity-base accounting. Overall the firm's human capital totals into its goodwill. The human capital can be estimated and then managed by allocating the goodwill to the activities taking place, a complex distribution process but one precisely complementary to that of activity-base accounting.

The widespread enthusiasm for a knowledge-based (KB) approach to understanding the nature of the firm and the possible basis for sustained competitive advantage has renewed interest in human capital accounting (Chen & Min, 2004). Training typically costs money and educated people are important corporate resources (Adner & Helfat, 2003). Indeed, it is estimated that the level of US corporate investment in intangible assets, around $1 trillion annually, almost matches investment in tangible assets (Lev, 2002). But how can such assets be valued and brought under the normal mechanisms of managerial control? The question has been raised often in recent years (Dekker & De Hoog, 2000; Liebowitz & Wright, 1999; Wilkins, Van Wegen, & De Hoog, 1997). While many attempts have been made to develop structured ‘objective’ methods for addressing intellectual capital (Petty & Guthrie, 2000) none have been widely adopted in the business world. Does the KB approach offer new possibilities? In this paper, we answer with a tentative yes, but in ways that leave much work undone, not least on our expectations of what can be achieved. Our argument follows from the observation that whatever human capital means, it must ultimately be evident in skilled predictable performance. Even this is only a first level of analysis, since human capital should also include the potential for skilled performance under circumstances, which have not yet arisen—a sort of second loop or level of analysis. A great deal of training, for rapid response in the event of a bio-terrorist attack, for instance, is undertaken in the hope that it will never result in performance. Nor is its exercise anything other than training. Performance is not elemental, in the sense of being constituted separately or standing apart from its context. It needs to be understood in the context of its being integrated into, and as a constituting part of, the production function. Hence, performance measurement and human capital must be based on the specific system of practices internal to the firm. Our central point is that in important ways, the sum of these practices constitutes a significant part of a firm's identity—on which the value of the human capital is thus contingent. This internally oriented view is quite different from the externally oriented basis of conventional accounting which looks outwards, depending on the existence of markets in which resources are accounted for in terms of the price paid to acquire them. Clearly, the externalist and internalist bases for valuation are different, as are the purposes in performing the evaluation. We might also consider a third more pragmatic valuation basis, the future revenue stream that might result from the ownership and deployment of particular assets. To expect that human capital can be measured and added into a balance sheet showing the prices paid as if they were tangible assets is to doom the project to immediate failure. It would be to mistake gravely the differences in the natures of the assets involved. But this argument cannot go anywhere without a complementary understanding of practice and its place in a theory of the firm, for it is only through the presentness of practice that the potential of all resources becomes of value. Here, the emerging knowledge-based insights into practice may be helpful. For at least a century, economists and accountants have pondered the implications of the difference between the value of the firm as a ‘going concern’ and its ‘book value’ (Petty & Guthrie, 2000; Veblen, 1965). Many presumed this was a failure of accounting, or of market perception, especially since the gap seems to have widened markedly in recent decades—to which Tobin's Nobel-winning work drew attention (Lindenberg & Ross, 1981). Accounting dismisses the matter rather arbitrarily by adding in a balancing item as the firm's ‘goodwill’ (Seetharaman, Balachandran, & Saravanan, 2004) thus overcoming the ambivalence of a market system that on the one hand prices the sum of the resources going into the firm at X and on the other the value of the integrated outcome at Y. Goodwill, portending profit and the return to the entrepreneur integrating these resources, is G=Y−X. Which leads directly to the puzzle of how value and wealth are, in fact, added, a matter on which, as we all know, both Smith (1986) and Penrose (1995) had much to say. In addition, the notion of goodwill aggregates the value of a wide variety of relationships between the firm and its environment. The knowledge implied is both of the firm as a whole, but also that in the minds of the individuals, firms, suppliers, customers and other communities that interact with the firm. Goodwill is a complex concept in the sense of our explaining precisely how such a gap between the tangible assets and the valuation might arise. It reflects the firm's past performance, of course, but also outsiders' expectations of the firm's future behaviour. Since these are perceptions of future events and potentialities rather than simple evaluations of what has already occurred, it is also a matter of the trust existing between these actors, and an indicator of the state of the local node of the network of economic and social relationships in which the firm is embedded. At first sight, goodwill seems aggregated and outwardly focused on others' views of the firm, while the idea of human capital (HC) seems disaggregated to the individual level and thus inwardly focused. Training, for instance, produces competencies that can be understood as expectations of future performance within the firm's systems of practice that are not directly observable in the market, reiterating the point that measures of HC assets need to be grounded in the firm's internal practices and problems rather than in those in the world beyond the firm's boundary. But intentions and purposes also come into play, and in the complex network of the firm and its relations there are many of these. One of many reasons to measure HC is that managers might thereby objectify their anticipations of individual or group performance; just as some try and rate a sports team's chances. They might then be able to anticipate the results of investing in an individual or a team's knowledge.

The search for an accounting for the human capital applied in organizations has accelerated along with the shift towards the increasing strategic significance of the firm's knowledge resources. In this paper, we argue that to seek a measure analogous to that of the firm's tangible resources is to miss the key point. Human capital is knowledge, and knowledge is generally a non-rivalrous resource. Thus, it cannot be accounted in the same framework as rivalrous resources. However, managers, as they integrate the activities comprising the firm meld its rivalrous and non-rivalrous resources together, an integration goes well beyond that suggested in Smith's or Grant's analysis. The firm's managers can get some sense of how well they are doing by seeing how the market measures the firm's goodwill. But the market's interests and time scales are not those of the firm, so the result may be of little immediate relevance to management's actions. Our argument is that the firm's goodwill is, in an important sense, a more direct measure of its total human capital, since this is both individual, in the sense of deriving directly from the employees' direct contributions as they do their work, and infrastructural, as they draw on the non-rivalrous systemic resources developed in previous periods. This is little more than a re-statement of Veblen's central theme in ‘The Theory of the Business Enterprise’ (Veblen, 1965). The accounting is complex since the firm's system of practice is complex, little understood outside the firm and opaque even to insiders. There are multiple patterns of production; as March has noted, some are oriented towards exploitation of the firm's knowledge, others towards husbanding it (March, 1991). Likewise there are multiple time periods to be considered. Management's strategic impact on the firm is shaped as they split the overall value-added between (a) the products and services which move on to the firm's customers and (b) the infrastructural resources applied in subsequent periods and by different work processes. This paper, therefore, extends the argument put forward by Liebowitz and Wright (1999) that an activity-based analysis could be the foundation of measuring human capital. Our central premise is that only by looking intently at the firm's practices can we make sense of its human capital. At the level of the firm this totals into its goodwill, though we can see human capital adding value at the level of the work practices traced by activity-base accounting. So human capital measurement becomes precisely complementary to ABC.