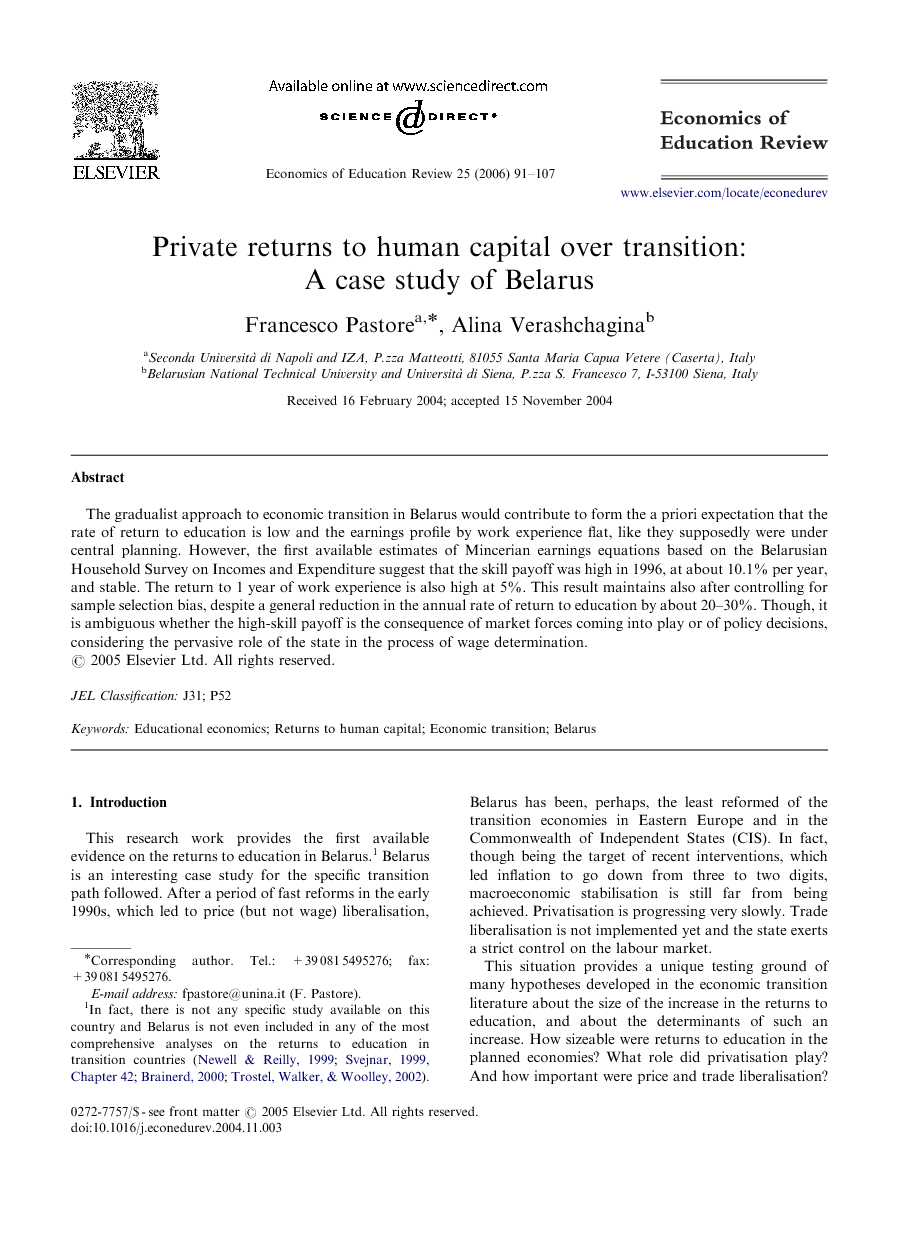 The gradualist approach to economic transition in Belarus would contribute to form the a priori expectation that the rate of return to education is low and the earnings profile by work experience flat, like they supposedly were under central planning. However, the first available estimates of Mincerian earnings equations based on the Belarusian Household Survey on Incomes and Expenditure suggest that the skill payoff was high in 1996, at about 10.1% per year, and stable. The return to 1 year of work experience is also high at 5%. This result maintains also after controlling for sample selection bias, despite a general reduction in the annual rate of return to education by about 20–30%. Though, it is ambiguous whether the high-skill payoff is the consequence of market forces coming into play or of policy decisions, considering the pervasive role of the state in the process of wage determination.

This research work provides the first available evidence on the returns to education in Belarus.1 Belarus is an interesting case study for the specific transition path followed. After a period of fast reforms in the early 1990s, which led to price (but not wage) liberalisation, Belarus has been, perhaps, the least reformed of the transition economies in Eastern Europe and in the Commonwealth of Independent States (CIS). In fact, though being the target of recent interventions, which led inflation to go down from three to two digits, macroeconomic stabilisation is still far from being achieved. Privatisation is progressing very slowly. Trade liberalisation is not implemented yet and the state exerts a strict control on the labour market. This situation provides a unique testing ground of many hypotheses developed in the economic transition literature about the size of the increase in the returns to education, and about the determinants of such an increase. How sizeable were returns to education in the planned economies? What role did privatisation play? And how important were price and trade liberalisation? More generally, does the speed of transition matter when looking at the evolution of returns to education over transition? To form an a priori expectation on these issues is not an easy task. On the one hand, this country has adopted a very slow approach to economic reforms, which suggests that the incentive for human capital accumulation has been low. In fact, the state sector still represents an important part of the overall output. On the other hand, Belarus has always been one of the CIS with the highest ranks of the Human Development Index (UNDP, 2003), essentially because of the high level of human capital accumulation. This would suggest that the returns to such type of investment be high. Then, the following questions arise: What role human capital played in shaping economic transition in Belarus? and (vice versa) How returns to education were affected by the ongoing economic transformation? Large evidence relative to various Central and Eastern European Countries (CEECs) as well as countries in the CIS both in the pre- and post-transition era suggests that the increase in the returns to education was noticeable, but slower than expected (reaching 4–5% on average in the mid-1990s, according to Newell & Reilly, 1999), while wage inequality was often driven by the increased complexity of the production structure (structural change). Conversely, generic and, even more so, job-specific work experience exhibits a lower return than in Western countries, also when combined with high education attainments (Orazem & Vodopivec, 1997; Newell & Reilly, 1999; Svejnar, 1999, Chapter 42; Sabirianova, 2003). In her comprehensive study on returns to education in several CEE and CIS economies, Brainerd (2000) found a lager increase in the returns to education than that found in Newell and Reilly (1999), but mixed evidence on returns to work experience. Estimates of Mincerian earnings functions based on the 1996 and 2001 waves of the Belarusian Household Survey on Incomes and Expenditure (BHSIE) partly confirm the above expectations, though with some surprises. Despite the gradual pace of reforms, the rate of return to each year of schooling is not lower than in many other transition countries, moving from 10.1% to 10.7% of the main wage for workers holding a university degree. Work experience provides workers with a further annual increase in wages by 5%, a premium that remained stable over the considered years. This is quite a high-skill payoff. How to interpret this result? It might suggest that a market for human capital is in place. Though, it is difficult to say whether this high educational premium is a consequence of decentralised mechanisms of resource allocation or, which is also likely, considering the state control on the system of wage determination, of a government policy in favour of high-skill workers to increase their productivity and, in the meantime, to maintain consensus. Starting from the mid-1990s, the country experienced increased competition from abroad, which could not be hindered via the usual mechanism of price control, partly abandoned already in the early 1990s. This pushed the government to look for ways to increase the competitiveness of manufacturing products without giving up state ownership. One way to do this might have been to use the wage grid to provide highly educated and experienced workers with higher wages. In the meantime, to correct the regressive nature of the wage distribution, the government provided compensatory in-kind payments and subsidies to low-skill workers. This pressure on wages, triggered also by the price increase of foreign goods, could also explain the high inflation rate the country continues to experience. The structure of the paper is the following. Section 2 provides some basic facts about returns to education in transition countries and analyses the forces affecting the wage distribution over transition. Section 3 focuses on the Mincerian approach. Section 4 introduces data set and variables used for the analysis. Section 5 analyses the econometric results, including those based on procedures to correct for selection bias, while Section 6 puts the results in perspective. Some concluding remarks follow.

The gradualist approach to economic transition would contribute to form the a priori expectation that the rate of return to education in Belarus should be low and the profile of the returns to work experience flat, like they supposedly were under central planning. However, the enquiry conducted in this paper shows that the education payoff in Belarus was remarkably high, at about 10.1%, already in the mid-1990s, and remains high in recent years. Moreover, the Belarusian labour market provided quite a high and stable premium to work experience, of about 5% per year. Such results are only slightly reduced when implementing sample selection correction procedures. This finding suggests making a distinction between Belarus and other transition countries, which almost universally experienced lower returns to work experience, which dramatically further declined over transition, and lower returns to education, which were on the rise over the period of reforms. An explanation could be the continuing pervasive role of the state in controlling the tariff system and imposing traditional seniority rules in Belarus, a country where the private sector has still a negligible size. This paper suggests that the believe that returns to education were low under the previous system was perhaps ill-posed and that the socialist system had in place robust mechanisms to stimulate and reward human capital accumulation, not much different from that typical of market economies.