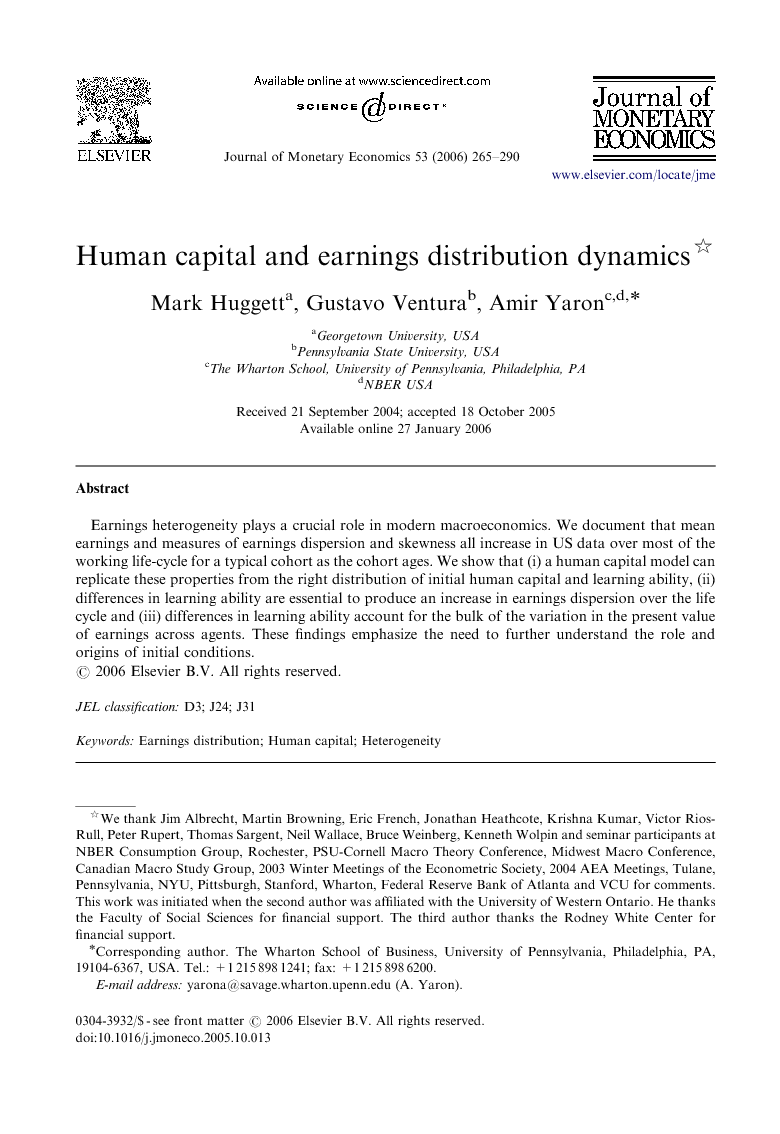 Earnings heterogeneity plays a crucial role in modern macroeconomics. We document that mean earnings and measures of earnings dispersion and skewness all increase in US data over most of the working life-cycle for a typical cohort as the cohort ages. We show that (i) a human capital model can replicate these properties from the right distribution of initial human capital and learning ability, (ii) differences in learning ability are essential to produce an increase in earnings dispersion over the life cycle and (iii) differences in learning ability account for the bulk of the variation in the present value of earnings across agents. These findings emphasize the need to further understand the role and origins of initial conditions.

We assess the degree to which a widely-used, human-capital model is able to replicate the age dynamics of the US earnings distribution documented in Fig. 1. We find that the model can account quite well for these age-earnings dynamics. In addition, we find that the model produces a cross-sectional earnings distribution closely resembling that implied by the age-earnings dynamics documented in Fig. 2. Our findings indicate that differences in learning ability across agents are key. In particular, in the model high ability agents have more steeply sloped age-earnings profiles than low ability agents. These differences in earnings profiles in turn produce the increases in earnings dispersion and skewness with age that are documented in Figs. 1 and 2. These findings are robust to the age at which the human capital accumulation mechanism described by the model begins and to different values of the elasticity parameter of the human capital production function. We also find that, despite its relative success in replicating these facts, the model is inconsistent with evidence related to the persistence of individual earnings. We mention two areas in which future work seems promising. The first has to do with the fact that the distribution of agents by initial human capital and ability is unrestricted by the model. Models of the family can provide restrictions on this initial distribution. For this class of models, an assessment of the ability to replicate the facts of age-earnings dynamics and intergenerational earnings correlations is a natural next step. The second area for future work deals with the fact that the model examined here abstracts from many seemingly important features. Three such features are the absence of a leisure decision, an occupational choice decision and shocks that make human capital risky. We comment on this last feature. First, allowing for risky human capital would be one way of integrating deeper foundations for earnings risk into the standard consumption-savings problem considered by the literature on the life-cycle, permanent-income hypothesis. This literature has examined in detail the determinants of consumption and financial asset holdings over the life cycle, but no comparable effort has been put into investigating the accumulation of human capital. Second, while there seems to be agreement that human capital is risky there is relatively little work that analyzes different sources of risk and then determines their quantitative importance.23 It is clear from this paper that a richer set of facts is needed to identify both initial conditions and shocks in a model with risky human capital, given that human capital theory can explain the patterns in Fig. 1 without shocks. Two interesting questions for a theory with risky human capital are (i) can such a model account for both the distributional dynamics of earnings and consumption over the life cycle? and (ii) what fraction of the dispersion in lifetime earnings is accounted for by initial conditions versus shocks? We plan to explore these questions in future work.