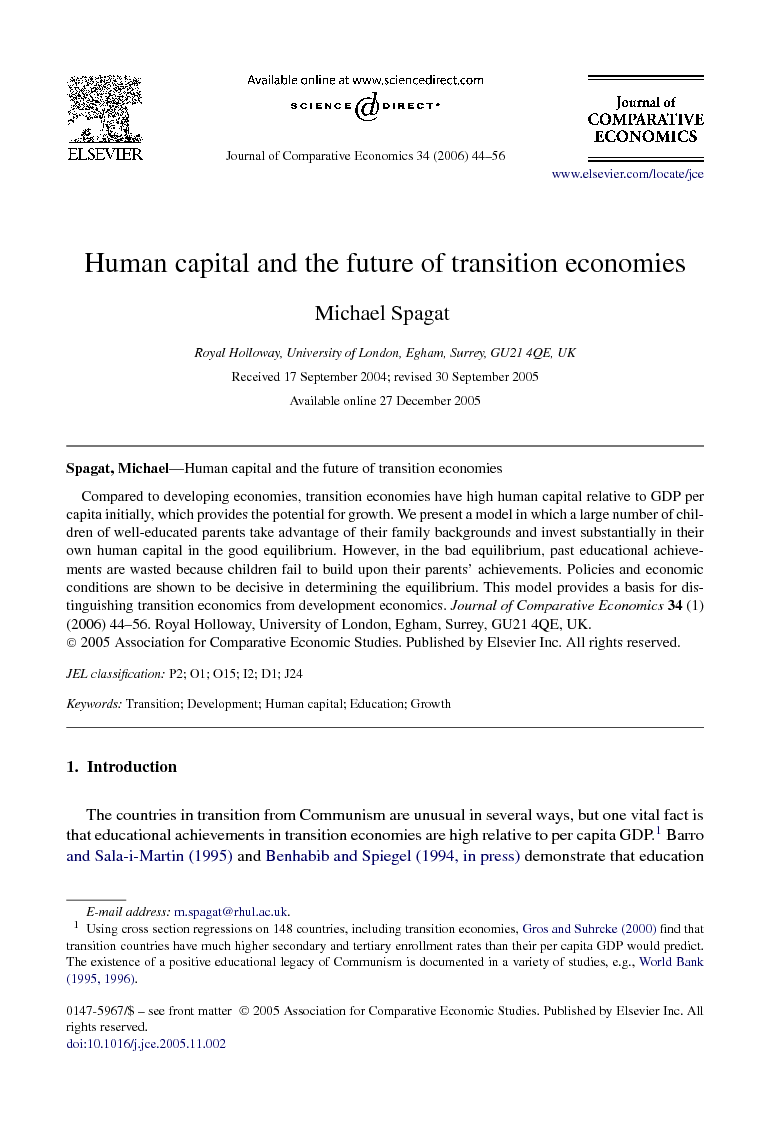 Compared to developing economies, transition economies have high human capital relative to GDP per capita initially, which provides the potential for growth. We present a model in which a large number of children of well-educated parents take advantage of their family backgrounds and invest substantially in their own human capital in the good equilibrium. However, in the bad equilibrium, past educational achievements are wasted because children fail to build upon their parents' achievements. Policies and economic conditions are shown to be decisive in determining the equilibrium. This model provides a basis for distinguishing transition economics from development economics. Journal of Comparative Economics34 (1) (2006) 44–56.

The countries in transition from Communism are unusual in several ways, but one vital fact is that educational achievements in transition economies are high relative to per capita GDP.1Barro and Sala-i-Martin (1995) and Benhabib and Spiegel, 1994 and Benhabib and Spiegel, in press demonstrate that education is important for economic growth.2 Further support for this view comes from the historical work of Sandberg (1979) and Williamson and O'Rourke (1997) on the spectacular growth of the Scandinavian countries when they joined the leading edge of Europe in the four decades before World War I. These authors find that above-average schooling in these countries played an important role in their convergence to European standards. Although this historical analogy is encouraging for transition economies, it is not decisive. We argue that the levels of human capital in some transition economies may decrease to fall in line with current living standards rather than supporting the growth of living standards consistent with the existing human capital levels. In our model, two types of equilibria are possible; rapid growth is associated with the good equilibrium while deterioration occurs in the bad equilibrium.3 The empirical literature supports the notion of two sharply different educational paths for transition economies.4Micklewright (1999) shows that enrollment rates in kindergarten, which is noncompulsory, have dropped sharply during the transition in the Caucasus, Central Asia, Southeast Europe and the Western CIS while similar rates have fallen only slightly in Central Europe and the Baltic States.5 Although noncompulsory general secondary education enrollment rates have remained steady in most countries, they have dropped sharply in the Caucasus and Central Asia.6 Educational expenditure figures are consistent with this pattern; the Caucasus and Central Asia are imploding, Central Europe and the Baltic States are in reasonable condition, and the rest of the European transition economies are in marginal or bad shape.7 In addition, Micklewright (1999) documents substantial differences in within-country educational opportunities based on family background and location, with rural locations being particularly disadvantaged.8 Thus, some countries may become dual economies having poor education in rural areas and good education in urban areas, particularly in the capital cities. In a contribution to the sparse theoretical literature on human capital and transition, Alexeev and Kaganovich (1998) uses an adverse selection argument to show how uncertainty over whether or not a major reform will be implemented can lead more-able people to prepare less for the possible change than do less-able people because the former group do better in the unreformed system.9 Hence, if reform is actually implemented, the more-able people are worse off due to their lack of preparation. In our paper, we analyze the educational decisions of young people rather than reorientation decisions of established workers and heterogeneity is determined by parental background in our model rather by worker qualifications. Moreover, we find that acquired education is always increasing in parental human capital so that more-able individuals perpetuate their initial advantage. Nevertheless, these two papers address the policy concern of possible underinvestment in human capital in transition countries. Fan et al. (1999) (FOS) argue that educational restructuring should have high priority early in the transition process in Russia and emphasize the potential for loss of human capital without such a policy. As in the present paper, FOS study the dependence of children's human capital acquisition on the human capital of their parents. However, FOS stresses the specific case of Russian educational restructuring. To apply the FOS model to all transition economies requires that countries be essentially alike, except in their policies toward educational restructuring. In contrast, we examine a wide range of policies relevant to all European transition economies. Our framework allows for multiple, Pareto-ranked equilibria and focuses on a variety of factors, including policies that support the good equilibrium. Although modern growth literature does not consider transition economies explicitly, many models introduce human capital externalities so that human capital is a crucial factor in determining growth, e.g., Nelson and Phelps (1966) and Lucas (1988). However, these models do not explain the two types of human capital paths emerging in transition countries. Other models of human-capital-related development traps include threshold externalities, as in Azariadis and Drazen (1990), liquidity constraints, as in Galor and Zeira (1993), and complementarity between human capital investment by individuals and R & D by firms, as in Redding (1996). Our paper differs from this literature in that we focus on transition economies in which the initial human capital distribution is a potential lynchpin for rapid development and we consider factors that could undermine this outcome. Münich et al. (2005), Newell and Reilly (1999), and World Bank (2001) present a general pattern of rising returns to human capital in transition countries that, nevertheless, remain below US and Latin American levels. We study the potential of converting these premia plus the high initial human capital into high human capital for a new generation. We construct a simple model that builds on common premises from the new growth theory and adds the human capital characteristic of transition economies as an initial condition. Our model yields results consistent with the two paths of human capital evolution emerging in transition economies. We argue that the good equilibrium is likely to apply to transition economies but not to typical developing economies due to the importance of the initial condition with respect to human capital. Hence, although transition economics and development economics are related in many ways, our model provides one plausible basis for separating the two fields. The plan of the paper is as follows. We present the model in Section 2. In Section 3, we provide an example that contrasts the economic problem facing transition economies from that of typical developing countries and also show some general results. Section 4 contains an analysis of the conditions under which a high-investment equilibrium exists and focuses on the link with actual patterns in transition. We conclude in Section 5 with some policy implications.

In this paper, we have developed a framework for modeling the intergenerational transmission of human capital that captures important differences between developing economies and transition economies. We show that multiple, Pareto-ranked equilibria arise naturally in the latter but not the former countries. We then focus on a variety of factors, including policies, that shed light on the reasons why the human capital of a transition country or region may be augmented or deteriorate. We identify a poor education system, either in terms of quality or capacity, inadequate returns to education, financial constraints impinging on people's ability to benefit from education, and an insufficiently strong initial distribution of human capital as main policy determinants of the human capital path. In some countries, the initial human capital has been affected adversely by government policies that discriminate against minorities leading to emigration of well-educated people. Government policies affect all aspects of schooling directly, including quality, capacity, and the cost of attendance. The returns to education depend on the development of a good market environment that protects contracts, minimizes corruption, and attracts foreign investment. Thus, although initial conditions are less favorable in some countries than in others, policy matters and may be decisive in determining the ability of a country to maintain a human capital stock that will support rapid growth during the transition. Some countries, notably those in Central Europe and the Baltic region, are on their way to converging with the economies of Western Europe. Other countries, particularly those in Central Asia and the Caucasus, appear to be losing their human potential and becoming middle-income developing countries with a long road to prosperity. Moreover, in many countries, high-human-capital urban areas, often concentrated in capital cities, are distinguished from backward rural areas with little potential for growth.