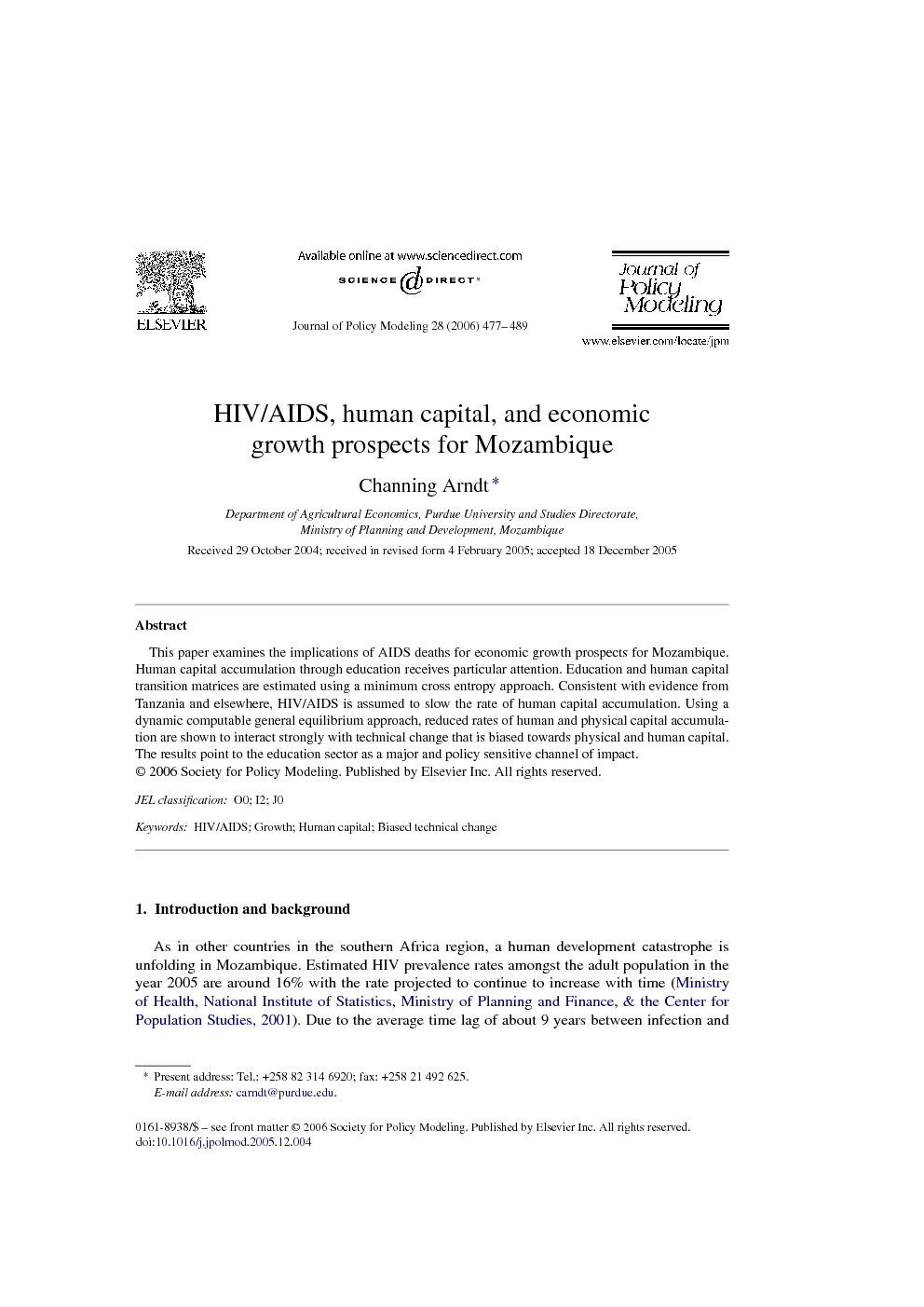 As in other countries in the southern Africa region, a human development catastrophe is unfolding in Mozambique. Estimated HIV prevalence rates amongst the adult population in the year 2005 are around 16% with the rate projected to continue to increase with time (Ministry of Health, National Institute of Statistics, Ministry of Planning and Finance, & the Center for Population Studies, 2001). Due to the average time lag of about 9 years between infection and death from AIDS, the projections of AIDS deaths through 2010 are, barring rapid advances in medical technologies, essentially programmed into the system. Nearly all of the people projected to die in this decade, including the latter parts, are already HIV positive. Efforts to comprehend the economic implications of the HIV/AIDS pandemic have been appearing in the literature for about a decade. Examples of early work include efforts by Cuddington (1993) and Kambou, Devarajan, and Over (1993). More recent assessments include Dixon, McDonald, and Roberts (2001), Robalino, Voetberg, and Picazo (2002), and Arndt and Lewis (2000). Despite well-known shortcomings, the studies typically focus on the growth rate of per capita GDP. Using this metric, the studies range widely in estimating mild to strong impacts. Early studies of AIDS and economic growth typically focused on physical capital accumulation and rates of technical progress as the primary channels through which the pandemic impacts economic growth. However, there are real concerns about impacts on the educational system and, by extension, on rates of accumulation of human capital. Since more educated people tend to be substantially more productive, declines in rates of human capital accumulation could have significant implications for growth. This area has been the focus of more recent literature. Bell, Devarajan, and Gersbach (2003), Young (2004), and Corrigan, Glomm, and Mendez (2005) point to human capital accumulation as the major potential conduit determining the duration and severity of economic implications from the HIV/AIDS pandemic. Conclusions diverge widely. For example, Bell et al. (2003) and Young (2004) both consider the case of South Africa. Their conclusions range from a positive impact on per capita GDP, phrased as “the gift of the dying” by Young (2004), to total economic collapse (Bell et al., 2003). In this study, human capital accumulation through education receives particular attention. The paper differs from the existing literature in that the implications of HIV/AIDS for human capital accumulation are considered from both the demand and supply sides. In addition, consistent with substantial evidence worldwide, technical change is assumed to be biased towards human capital implying interactions between growth in the human capital stock, technical change, and the rate of economic growth. Finally, empirical estimations of transition probabilities within the education sector underlie the analysis. The results point to the education sector as a major and policy sensitive channel of impact. The paper is structured as follows: Section 2 summarizes a detailed analysis of the implications for human capital accumulation conducted by Arndt (2003). Section 3 presents the economy-wide modeling approach including critical assumptions and model scenarios. Section 4 discusses the major results. Section 5 provides the concluding remarks.

Three general policy conclusions emerge from this analysis. • Aggressive actions to limit the scope, duration, and economic impacts of the AIDS pandemic should be undertaken. • Maintaining school enrollment rates, graduation rates, and quality, along with other efforts to maintain or increase the stock of human capital, should figure prominently among these actions. • Macroeconomic planners should reduce their expected growth rates. Very rapid growth rates (e.g., 8% per year) are unlikely to be realized in the medium term.