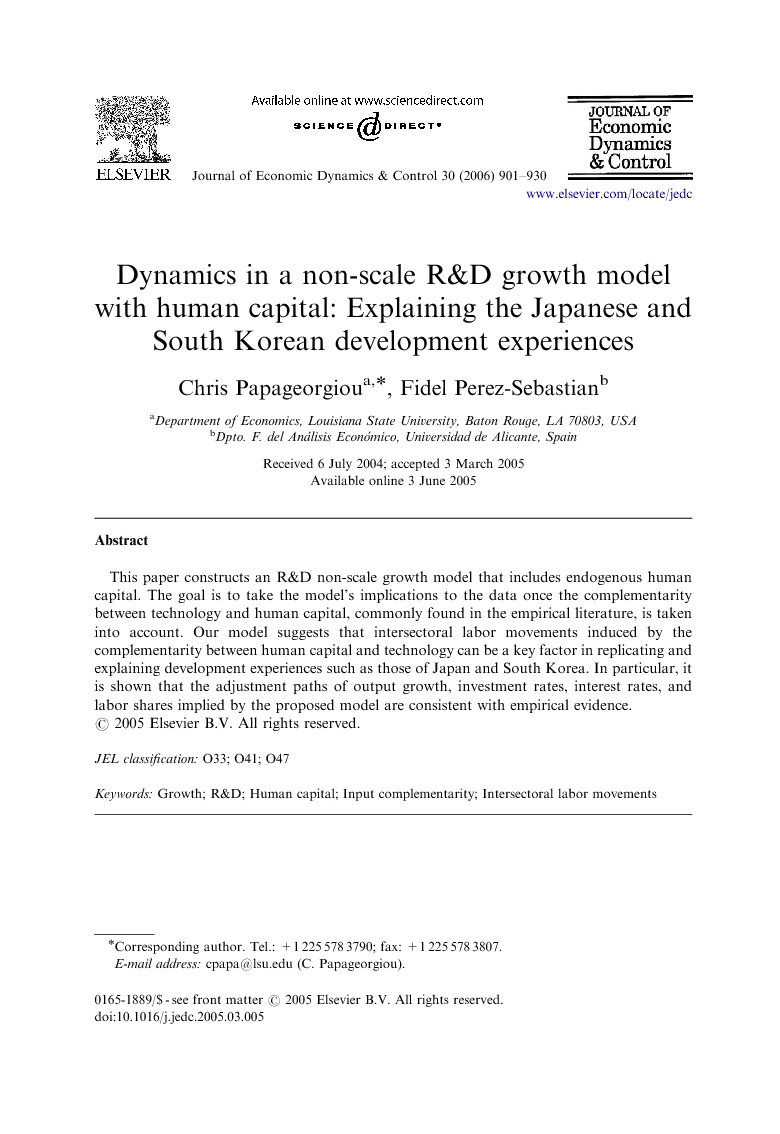 This paper constructs an R&D non-scale growth model that includes endogenous human capital. The goal is to take the model's implications to the data once the complementarity between technology and human capital, commonly found in the empirical literature, is taken into account. Our model suggests that intersectoral labor movements induced by the complementarity between human capital and technology can be a key factor in replicating and explaining development experiences such as those of Japan and South Korea. In particular, it is shown that the adjustment paths of output growth, investment rates, interest rates, and labor shares implied by the proposed model are consistent with empirical evidence.

‘Development miracles’ constitute one of the most intriguing phenomena associated with modern economic growth. The stylized facts concerning such fast-growing economies are truly staggering. For example, over the period 1960–1990, Japan and South Korea averaged output growth rates over 5 percent per year. Fig. 1 illustrates the growth experiences of these two miracle countries. Closer observation of Fig. 1 reveals an interesting feature of miraculous experiences: the sharp increase of output per worker was characterized by growth rates that did not peak at the beginning of the convergence process but later on, thus giving way to a hump-shape growth path. Full-size image (33 K) Fig. 1. Output growth rates in Japan and S. Korea. Figure options What is even more interesting is that the underlying characteristics of the two East Asian miracle economies are distinctly different. Whereas Japan started its postwar convergence path with high human capital levels, S. Korea started its convergence path with very low human capital levels. In addition, although both nations began with relatively low levels of physical capital, Japan accumulated equipment, machinery, and infrastructure at a much higher rate than S. Korea. Even regarding output growth rates, miraculous experiences show important differences. In Fig. 1, we see that Japanese growth rates were relatively high from the beginning of the convergence process, whereas S. Korean growth rates started low and increased rapidly. The influential paper by Robert Lucas ‘Making a Miracle’ (Econometrica, 1993) concluded that improving our understanding of the mechanics of rapid growth episodes is essential in constructing a successful theory of economic development. Since Lucas (1993), there has been surging interest in theoretical research attempting to explain development miracles, with a number of papers being able to reproduce the average convergence speed exhibited by rapidly growing nations. However, growth models have not in general been able to predict the variable convergence speed needed to generate the observed hump-shaped adjustment path of output growth rate. Nor has the literature paid close attention to the distinct characteristics of miraculous episodes. In this paper, we propose a model in which the complementarity between human capital and technology adoption is able to replicate and explain development miracles. Surprisingly, there have been few attempts in the theoretical literature to explore growth models with endogenous human capital and technical progress, despite surging evidence that these two engines are indeed complementary. 1 Our model is a hybrid R&D-based model a lá Jones (1995) in which technical progress is enhanced through innovation and imitation, and human capital through formal schooling. 2 Even though formal schooling is not the only source of human capital, we choose a schooling-based human capital technology because the model will ultimately be taken to the data following the approach suggested by Klenow and Rodríguez-Clare (1997). Our choice of schooling technology is based on the Mincerian approach ( Mincer, 1974) that has recently been revived by Bils and Klenow (2000). 3 Using standard technologies and parameterization, we show that our calibrated model is successful in replicating the rapid growth rates of Japan and S. Korea, including the hump-shaped output growth adjustment paths associated with these experiences. It is also found that the model can generate adjustment paths for interest rates, investment, and labor force shares that follow the patterns in the data. This is in sharp contrast to the counterfactual implications of the standard one-sector neoclassical growth framework pointed out by King and Rebelo (1993). A key factor contributing to these results is the complementarity between human capital and technology adoption that, in turn, induces reallocation of labor across sectors along the adjustment path. The implications of the hybrid R&D-based non-scale growth model have been extensively explored by Eicher and Turnovsky, 1999a, Eicher and Turnovsky, 1999b and Eicher and Turnovsky, 2001 and Perez-Sebastian (2000). Unlike us, these authors do not consider human capital. There is, however, a small but rapidly growing literature that investigates the relationship between human capital accumulation and technological progress, and their combined effect on economic growth. Eicher (1996) and Lloyd-Ellis and Roberts (2002) develop models in which both human capital and technological innovation are endogenous, but they are only concerned with steady-state predictions. Like us, Keller (1996) and Funke and Strulik (2000) study transitional dynamics in a model of human capital and blueprints. Nevertheless, they do not take the predictions of their models to the data. Perhaps closer to the scope of our paper is Parente and Prescott (1994) who focus on differences in barriers to technology adoption caused by sociopolitical factors such as corruption, legal constraints, and violence. However, Parente and Prescott's work reproduces postwar miraculous recoveries through exogenous changes in the size of the barriers along the adjustment path. In contrast, we change the barrier size by considering human capital accumulation and intersectoral labor movements. The remainder of the paper is organized as follows. Section 2 presents the basic model and examines its steady-state properties. Attention is focused on the schooling sector, which is the main innovation of the model. Section 3 motivates our choice of Japan and S. Korea as the countries of focus in our investigation. Section 4 explains the parameterization and calibration of our model to fit the growth processes of these two countries, and obtains the adjustment paths implied by three modifications of our theoretical model. Section 5 concludes, discussing the main findings and limitations of our work.

In this paper, we propose a new model that accounts for development miracle experiences. The introduction of a novel law of motion of human capital allows the proposed model to determine endogenously both technology and human capital, thus making it possible to explicitly consider the potential complementarity between those two engines of growth. Our main result is that our calibrated model is quite successful in replicating the rapid growth rates of Japan and S. Korea, including the hump-shaped output growth adjustment paths associated with these experiences. In addition, the model can generate adjustment paths for interest rates, investment rates, and labor force shares that are consistent with the main trends suggested by the empirical evidence. The key insight from our analysis and main contributing factor to our model's success in replicating the Japanese and S. Korean growth experiences is the complementarity between human capital and technology adoption. This complementarity induces reallocation of labor across sectors along the adjustment path, which makes it possible to replicate the hump-shaped output growth paths of Japan and S. Korea. This is in sharp contrast to the counterfactual implications of the standard one-sector neoclassical growth framework pointed out by King and Rebelo (1993). Our work further suggests that the hypothesis proposed in previous literature (see e.g. Griliches, 1988 and Nelson and Pack, 1999) that the enhancing effect of human capital on technology adoption is sufficient to reproduce the growth patterns shown by East Asian miracle countries does not necessarily hold in a more structural model. To reiterate, our results imply that taking into account labor reallocations across sectors is crucial to replicating the Japanese and S. Korean experiences. Like Parente and Prescott (1994), we have focused on exogenous differences in barriers to technology adoption to replicate the average speed of convergence implied by the Japanese and S. Korean experiences. However, in Parente and Prescott's setup variable convergence speeds are possible only through exogenous variations in the degree of barriers, whereas in our setup convergence speed changes are endogenous as we allow for the endogenous determination of labor force. Our work is certainly not without limitations. In this paper, we have focused on the socially optimal equilibrium. Predictions with the proposed specification would differ under the decentralized problem. In particular, agents would not internalize the positive external effects and therefore choose less schooling. As mentioned in footnote 10, a decentralized setup would make the transitional dynamics analysis much more cumbersome, if not impossible. We leave this issue to future research. Another limitation of our work is that the proposed model predicts enrollment rates that are larger than their empirical counterparts. This suggests that the model predictions could be improved if the accumulation of human capital would not necessarily imply the transfer of resources from the final-output sector. Future research could introduce leisure in the utility function, or allow for home production. Alternatively, we could permit human capital formation though learning-by-doing or on-the-job training. Another extension could consist of introducing different human capital technologies for final output and R&D labor, although further research is clearly necessary in determining the appropriate weights to be assigned to the effectiveness of human capital in different sectors. In a general sense, we interpret our results as suggesting that a successful model of economic growth and development should include both technological progress and human capital accumulation as necessary engines, and the endogenous outcome of the economic system. It is shown that the value added from pursuing such models greatly exceeds the added complexity. In a more specific sense, our results suggest that the technology–human capital complementarity and the subsequent labor reallocation are crucial components in the making of development miracles.