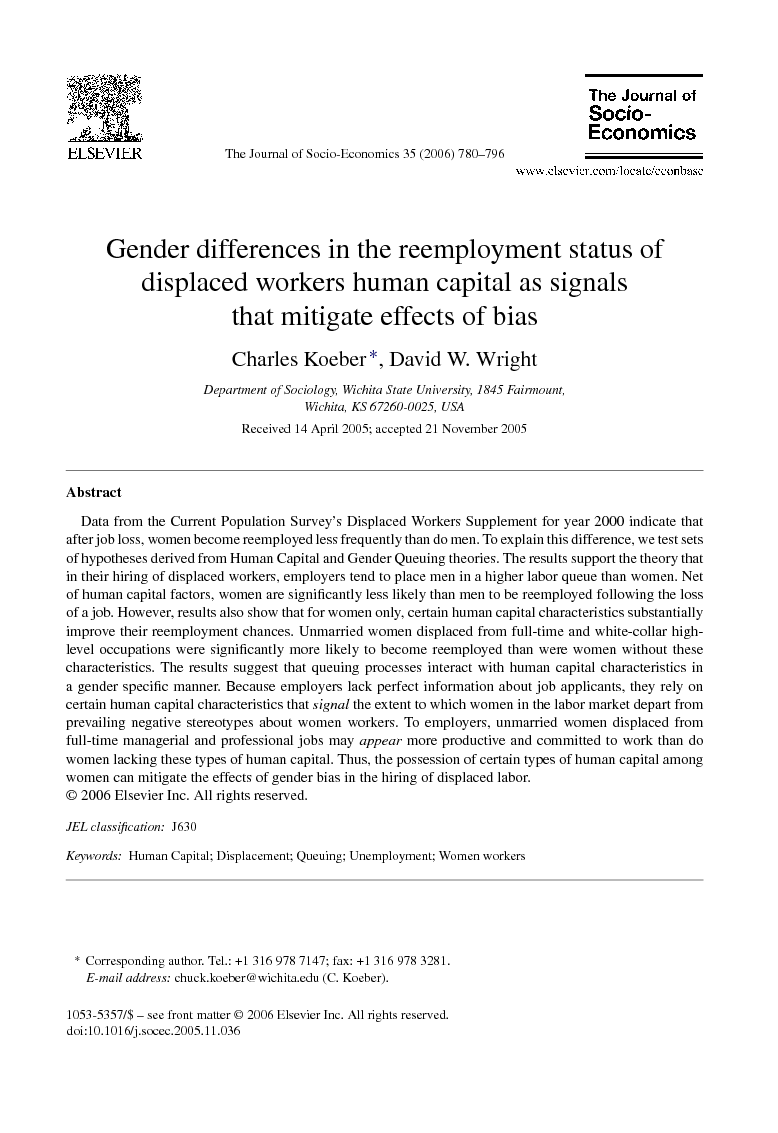 Data from the Current Population Survey's Displaced Workers Supplement for year 2000 indicate that after job loss, women become reemployed less frequently than do men. To explain this difference, we test sets of hypotheses derived from Human Capital and Gender Queuing theories. The results support the theory that in their hiring of displaced workers, employers tend to place men in a higher labor queue than women. Net of human capital factors, women are significantly less likely than men to be reemployed following the loss of a job. However, results also show that for women only, certain human capital characteristics substantially improve their reemployment chances. Unmarried women displaced from full-time and white-collar high-level occupations were significantly more likely to become reemployed than were women without these characteristics. The results suggest that queuing processes interact with human capital characteristics in a gender specific manner. Because employers lack perfect information about job applicants, they rely on certain human capital characteristics that signal the extent to which women in the labor market depart from prevailing negative stereotypes about women workers. To employers, unmarried women displaced from full-time managerial and professional jobs may appear more productive and committed to work than do women lacking these types of human capital. Thus, the possession of certain types of human capital among women can mitigate the effects of gender bias in the hiring of displaced labor.

Every year millions of workers lose their jobs through no fault of their own, and millions of families must cope with the hardships and challenges that follow. Paradoxically, high levels of job cuts occurred even during the 1990s when many companies earned record high profits and national unemployment levels were at historic lows. In attempts to maximize competitiveness in a new global economy, business organizations used outsourcing, mergers, business process reengineering, new forms of management, and advanced information technologies to shrink their workforces (Harrison, 1994 and Kraft, 1999). Consequently, at the end of the 1990s, announcements of job cuts occurred at or near record high numbers (Laabs, 1999), and many argued that downsizing had become a defining feature of a new capitalism under which all types and classes of workers were at increased risk of losing their jobs ( Budros, 1998, Sennett, 1998, Osterman, 1999 and Smith, 2001). Although many lost their jobs, the strength of the United States economy offered some relief. As Helwig (2001) points out, “in a strong economy many displaced workers were able to find new jobs with little or no change in weekly earnings” (p. 13). However, not all segments of the workforce experienced the same chances of finding new jobs (Perrucci et al., 1997). Reemployment outcomes among the displaced varied substantially by workers’ age (Stevens, 1999), occupation (Moore, 2001), conditions of their local labor markets (Indergaard, 1999), and types and levels of assistance they received while job searching (Granovetter, 1995 and Smith, 2001), among other factors. In this paper, we focus on another important factor affecting the reemployment chances of displaced workers: gender. The Department of Labor's 2000 Displaced Worker Survey (DWS) indicates that following job loss, women were less likely than men to be reemployed. Table 1 indicates that by conservative measure,1 the rate of (re)employment for displaced men was nearly 8% higher than for women. Moreover, while only a small proportion of men reported that they had stopped looking for work, nearly 14% of women reported that they had stopped their job search and, therefore, were no longer officially considered part of the labor force. This paper addresses these gender differences. Table 1. Employment status by sex of displaced workers Male (%) Female (%) All (%) Employed 82.1 74.4 78.5 Unemployed 13.5 11.8 12.7 Not in the labor force 4.4 13.8 8.8 Total 100 100 100 Source: Authors’ analysis of 2000 Current Population Survey's Displaced Worker Supplement. Table options The central purpose of this study is twofold: (1) to examine the extent to which gender differences in post-displacement employment are a product of gender differentials in human capital and (2) to examine the extent to which gender differences in post-displacement employment may occur as a result of labor queuing, a form of gender bias in which employers arbitrarily rank their preferences for male over female displaced labor. Using the 2000 DWS, we identify factors and test hypotheses that measure the likelihood of reemployment for male and female displaced workers. We begin by proposing a set of factors and hypotheses suggested by Human Capital theory, which represents a neoclassical economics approach. According to this perspective, gender differences in the reemployment of displaced workers are influenced by optimizing decisions men and women make about their participation in employment and the human capital they attain within a free market. Alternately, we propose contrasting factors and hypotheses derived from the Queuing theory, a sociological perspective which suggests that reemployment differences may be attributed to constraints placed upon displaced job seekers by employers’ arbitrarily ranked preferences for certain gender attributes. We also examine factors and test hypotheses that examine the importance of employer preferences for certain race and age attributes. Although more recent empirical studies of job displacement have typically included gender as a variable, studies that focus on gender differences among the displaced have been relatively fewer in number (Perrucci et al., 1997). Historically, many studies of plant closings or involuntary unemployment included women, not as displaced workers, but as wives, mothers, and daughters of male job losers (Kozlowski et al., 1993). Beginning in the 1980s, several sociological case studies of plant closings and empirical studies in economics included displaced women. However, relatively few studies using national-level data have focused on gender differences (Spalter-Roth and Deitch, 1999), and even fewer have attempted to pose a theoretical explanation of these differences. Therefore, by identifying explanations for reemployment outcomes of the displaced, this study yields important information that researchers, policy makers, and planners can use to enhance the employment prospects of displaced workers. It also contributes to an improved understanding of gender differences in displacement and reemployment processes.

Many academics, policy makers, and journalists have celebrated the progress that women workers have made in recent decades. Accordingly, women have increased their labor force participation, closed the pay gap, and made inroads into occupations historically occupied by men. However, our findings suggest a more sobering view. Displacement of women and the after-effects of job loss may contribute to a reversal of some women's progress. Displaced women, more so than displaced men, do not return to employment. This research has attempted to find out more about why this occurs.