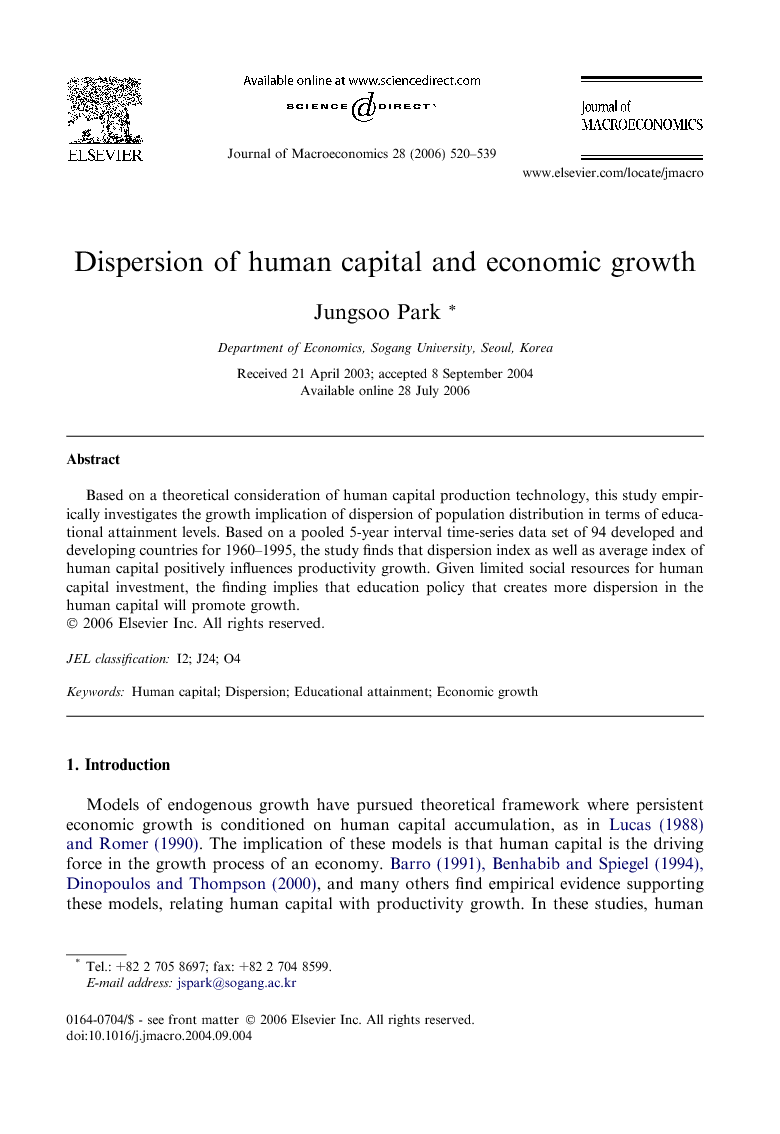 Based on a theoretical consideration of human capital production technology, this study empirically investigates the growth implication of dispersion of population distribution in terms of educational attainment levels. Based on a pooled 5-year interval time-series data set of 94 developed and developing countries for 1960–1995, the study finds that dispersion index as well as average index of human capital positively influences productivity growth. Given limited social resources for human capital investment, the finding implies that education policy that creates more dispersion in the human capital will promote growth.

The study examines the significance of human capital dispersion on the productivity growth based on production function regressions against a 5-year interval pooled time-series data set of 94 developed and developing economies. Controlling for catch-up effect, regional and time dummies, the empirical results provide strong evidence that both average index and dispersion index of human capital contribute positively to the productivity growth. The findings on the average index of human capital support earlier theoretical literature on human capital effect on productivity growth. Most interesting result in this study is that more dispersion of population distribution in terms of educational levels adds to the productivity growth, contrary to the previous findings. This evidence is consistent with the theoretical discussion regarding the existence of non-linearity in human capital production technology in Section 2. The results of this study support the convexity hypothesis where each additional education year at a higher level raises the human capital of individual at an increasing rate. The findings in this study imply that given the limited social resources for education, an economy would perform better when it allocates resources to support all levels of education, rather than when it focuses on promoting one particular level of education, for example, basic education. The implication may be especially strong for the underdeveloped economies when they optimize their education policy strategy targeting growth. A more detailed data set on the distribution of educational attainment would help derive a more accurate measure of dispersion to differentiate the degrees of dispersion amongst the advanced economies. Furthermore, it would be interestOperational Researching to investigate the degree of complementarity amongst different types of labors distinguished by their educational attainments and by area of study. These issues remain for future research.