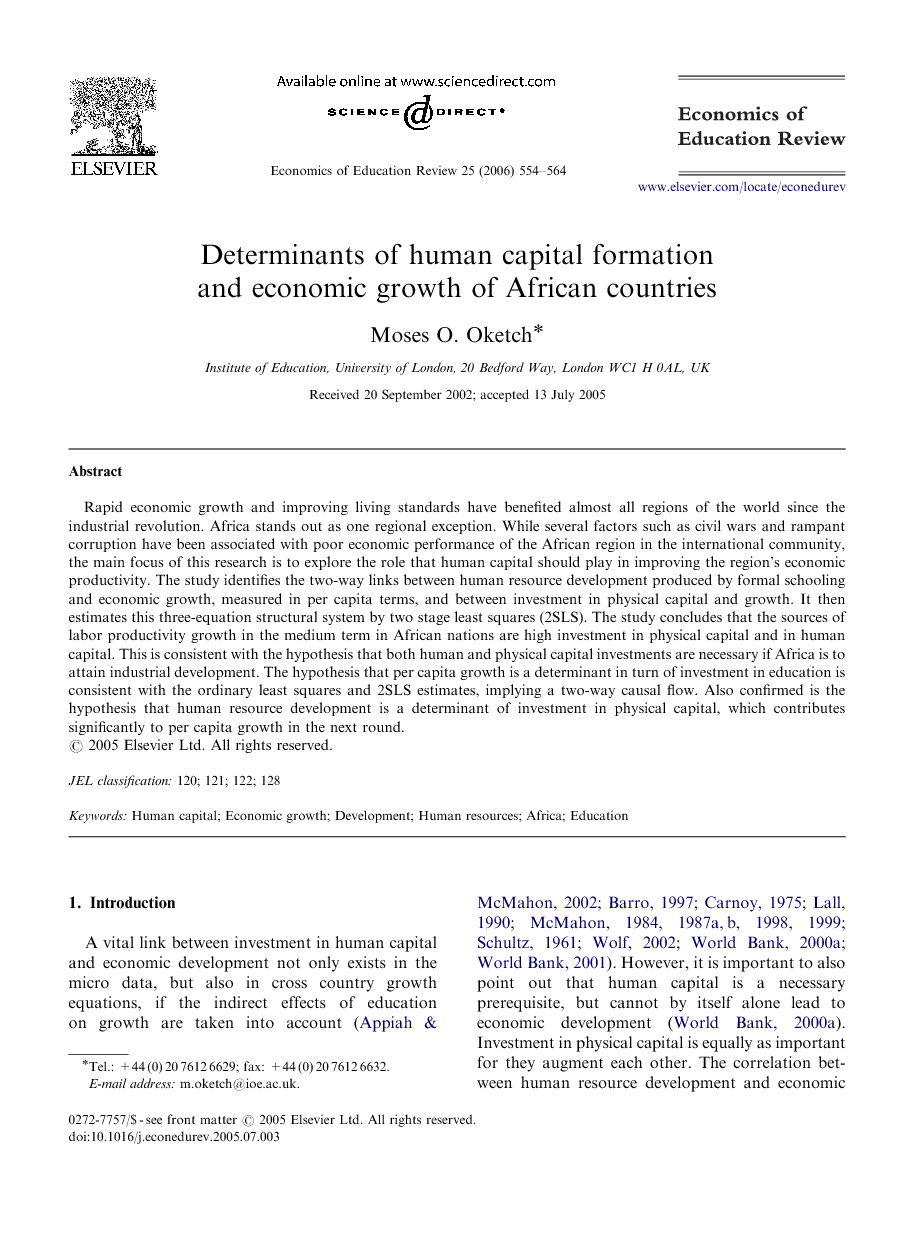 Rapid economic growth and improving living standards have benefited almost all regions of the world since the industrial revolution. Africa stands out as one regional exception. While several factors such as civil wars and rampant corruption have been associated with poor economic performance of the African region in the international community, the main focus of this research is to explore the role that human capital should play in improving the region's economic productivity. The study identifies the two-way links between human resource development produced by formal schooling and economic growth, measured in per capita terms, and between investment in physical capital and growth. It then estimates this three-equation structural system by two stage least squares (2SLS). The study concludes that the sources of labor productivity growth in the medium term in African nations are high investment in physical capital and in human capital. This is consistent with the hypothesis that both human and physical capital investments are necessary if Africa is to attain industrial development. The hypothesis that per capita growth is a determinant in turn of investment in education is consistent with the ordinary least squares and 2SLS estimates, implying a two-way causal flow. Also confirmed is the hypothesis that human resource development is a determinant of investment in physical capital, which contributes significantly to per capita growth in the next round.

A vital link between investment in human capital and economic development not only exists in the micro data, but also in cross country growth equations, if the indirect effects of education on growth are taken into account (Appiah & McMahon, 2002; Barro, 1997; Carnoy, 1975; Lall, 1990; McMahon (1984), McMahon (1987a), McMahon (1987b), McMahon (1998) and McMahon (1999); Schultz, 1961; Wolf, 2002; World Bank, 2000a; World Bank, 2001). However, it is important to also point out that human capital is a necessary prerequisite, but cannot by itself alone lead to economic development (World Bank, 2000a). Investment in physical capital is equally as important for they augment each other. The correlation between human resource development and economic growth therefore appears to run both ways. It is necessary for human resources to grow if development is to proceed in the productive sectors. The productive sectors in turn have to grow and diversify in order to permit more opportunities for human resources to develop and to employ the enhanced flow of skills and talents that are produced (Barro, 2000; Lall, 1990; Wolf, 2002). Thus, rich nations invest heavily in education because they have the resources to do so and poorer countries also struggle to invest in human resource development in order to catch up. Against this background, it has been observed that an essential prerequisite for sustained economic development of African countries is adequate rates of growth in human resources to sufficient and sustainable levels (Elu, 2000; Heyneman, 1999; Oketch (2000) and Oketch (2002); McMahon, 1999; UNESCO, various years: 1965–2000; World Bank (various yearsa), World Bank (various yearsb) and World Bank (2000a)). Since the 1970s most African countries, especially those within the sub-Saharan region have registered dismal or negative economic growth as measured by changes in the gross national product (GNP) per capita. Many of the countries in Africa have also registered low human development index. As evident from a sample of countries presented in Table 1, only Botswana, Egypt, Cameroon, Republic of Congo, Kenya and Mauritius, experienced any reasonable average annual rate of growth in GNP per capita of over 1% a year during the 1965–1998 period. Table 1. Trends in key economic and human development indicators in selected African countries Country Gross national product per capita US$ 1998 Average annual rate of growth in the GNP per capita, 1965–1998 (%) Human development index (2002) Angola 380 — 0.381 Benin 380 0.1 0.421 Botswana 3070 7.7 0.589 Burkina Faso 240 0.9 0.302 Burundi 140 0.9 0.339 Cameroon 610 1.3 0.501 Central Afri. Rep. 300 −1.2 0.361 Chad 230 −0.6 0.379 Congo 680 1.4 0.494 Congo dem. Rep. 110 −3.8 0.365 Cote d’Ivoire 700 −0.8 0.399 Egypt 1290 3.5 0.653 Ethiopia 100 −0.5 0.359 Gabon 4170 0.4 0.648 Ghana 340 −0.8 0.568 Guinea 530 — 0.425 Kenya 350 1.3 0.488 Madagascar 260 −1.8 0.469 Malawi 210 0.5 0.388 Mauritius 3730 3.8 0.785 Mozambique 210 0.5 0.354 Niger 200 −2.5 0.292 Nigeria 300 0.0 0.466 Senegal 520 −0.4 0.437 Sierra Leone 140 −1.6 0.273 Sudan 290 −0.2 0.505 Tanzania 220 — 0.407 Togo 330 −0.6 0.495 Uganda 310 — 0.493 Zambia 330 −2.0 0.389 Sub-Saharan Africa 510 — — Source: World Bank (2000b). World development indicators. Washington, DC: The World Bank; UNDP (2004). Human development report. New York: UNDP. Table options In the 1980s, and 1990s most countries in the region found it even more difficult to deal effectively with their poor economic performance. In fact, Angola, Burundi, Cameroon, Republic of Congo, Sierra Leone, Democratic Republic of Congo/Zaire, and Zambia registered relatively high rates of economic decline during the period 1987–1997 (Elu, 2000; World Bank (various yearsa) and World Bank (various yearsb)). Poor economic performance in sub-Saharan Africa is said to be caused by drought, poorly developed infrastructures, lack of both human and physical capital, bad governance, political violence and ethnic wars, and diseases such as HIV Aids, and such external factors as the economic policies of the industrial countries of the North—which through subsidies make it difficult for exporters of primary commodities in Africa to effectively compete in the international market. Economic policies advanced by international financial systems of World Bank and International Monetary Fund (IMF) have also been blamed for sometimes exacerbating the African economic crisis—and are said to undermine the ability of sub-Sahara African countries to participate effectively in the global economic set up (Mbaku, 1997; Mkandawire & Soludo, 1999). Many countries in Africa have failed to achieve food security; most of them are today unable to meet the basic needs of their populations such as universal primary education and basic health guarantees. A majority of the citizens of these countries have become more impoverished, suffer from high rates of material deprivation, and face many uncertainties (Elu, 2000; Oketch, 2002). The analysis presented in this paper is based on three hypotheses. The first is that human resource development produced by formal schooling is essential for economic growth of African countries. The second hypothesis is that both human and physical capital investments are essential if Africa is to attain an industrial level development. The third and equally important hypothesis is that per capita growth through labor productivity is an essential determinant of human resource development produced by formal schooling. The primary purpose of this study therefore is to establish the determinants of human capital formation, economic growth and development of the African countries studied. The paper is organized as follows. Section 2 develops the theoretical framework by tracing briefly the idea of endogenous growth theory and its relation to the process of human capital formation. Section 3 presents the model proposed here for testing the hypotheses for the analysis in this paper. Section 4 presents the discussion of the results of the proposed model. Section 5 presents the conclusions and recommendations based on the discussion and analysis of the results of the empirical estimation of the proposed model.