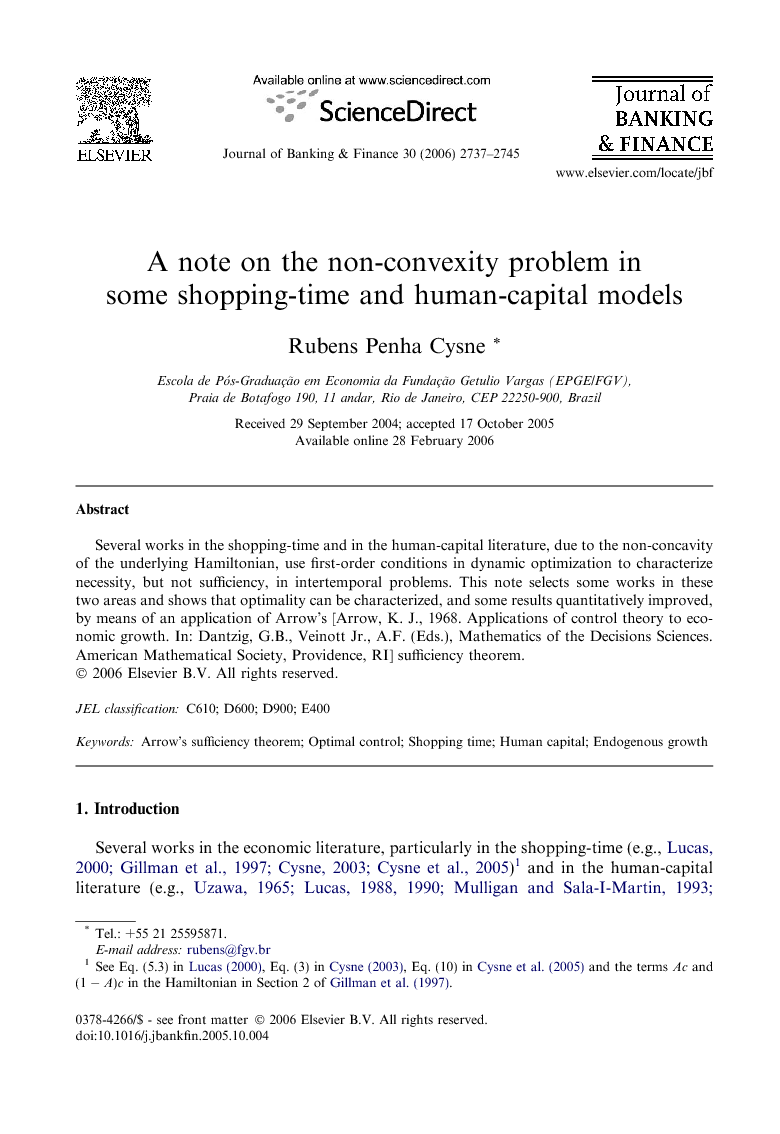 Several works in the shopping-time and in the human-capital literature, due to the non-concavity of the underlying Hamiltonian, use first-order conditions in dynamic optimization to characterize necessity, but not sufficiency, in intertemporal problems. This note selects some works in these two areas and shows that optimality can be characterized, and some results quantitatively improved, by means of an application of Arrow’s [Arrow, K. J., 1968. Applications of control theory to economic growth. In: Dantzig, G.B., Veinott Jr., A.F. (Eds.), Mathematics of the Decisions Sciences. American Mathematical Society, Providence, RI] sufficiency theorem.

Several works in the economic literature, particularly in the shopping-time (e.g., Lucas’s, 2000, Gillman et al.’s, 1997, Cysne’s, 2003 and Cysne et al.’s, 2005)1 and in the human-capital literature (e.g., Uzawa’s, 1965, Lucas’s, 1988, Lucas’s, 1990, Mulligan and Sala-I-Martin’s, 1993, Caballe and Santos’s, 1993, Chari et al.’s, 1995, Ladron-de-Guevara et al.’s, 1999 and Kosempel’s, forthcoming)2 use first-order conditions in dynamic optimization to directly characterize necessity, but not sufficiency, in intertemporal problems. Seeing such questions under a perspective of optimal-control theory, the reason for the absence of sufficiency, usually either implicitly or explicitly recognized by the authors, is that the non-concavity of the associated Hamiltonian does not allow for the use of Mangasarian’s (1966) well known sufficiency conditions. Mangasarian’s theorem states that if the Hamiltonian is (strictly) concave with respect to the control and the state variables, then the first-order conditions are also sufficient for an interior (unique) optimum. The papers cited above are some examples in the economic literature in which such conditions are not obeyed. Arrow’s (1968) theorem, though, generalizes Mangasarian’s result, and, as we shall see, is able to provide quantitative insights and to generate sufficiency in some cases in which Mangasarian’s result is not directly applicable. Arrow’s theorem requires another type of concavity. In words, first, the Hamiltonian is maximized with respect to the control variables, for a given value of state and costate variables. The optimum values of the control variables, as a function of the state variables and of the costate variable, are then substituted into the Hamiltonian. Call this new function (of the state and costate variables) the maximized Hamiltonian. Arrow’s main result is that if this maximized Hamiltonian is (strictly) concave with respect to the state variables, for the given values of the costate variables, then the first-order conditions characterize a (unique, concerning the state variable) optimum.3 Of course, if the Hamiltonian is concave with respect to both the state and control variables, then the maximized Hamiltonian will be concave in the state variables. But the reverse is not true. This is the reason why Arrow’s theorem is able to generalize Mangasarian’s sufficiency conditions. The main purpose of this note is calling the attention to the fact, and exemplifying how, in some specific cases, an application of Arrow’s theorem can yield returns at very reasonable costs in terms of the required algebrisms. As a by-product of the analysis, a complementary insight into some papers of the shopping-time and human-capital literature (the ones used as examples) is also delivered. The plan of the note is as follows. Section 2 presents a formal version of Arrow’s theorem. In Section 3 I exemplify the use and usefulness of the theorem within the shopping-time literature and, in Section 4, within the human-capital literature. Section 5 concludes.

In this work I have chosen some papers in the shopping-time and in the human-capital literature in which the usual Mangasarian’s sufficiency conditions for optimality in control-theory problems are not satisfied. In such cases, Pontryagin et al.’s (1962) Maximum Principle cannot tell us if a point satisfying the first-order conditions represents an optimum or not. Next, I have shown, in each case, that quantitative insights can be provided and that optimality can be characterized by means of an application of Arrow’s (1968) sufficiency theorem.