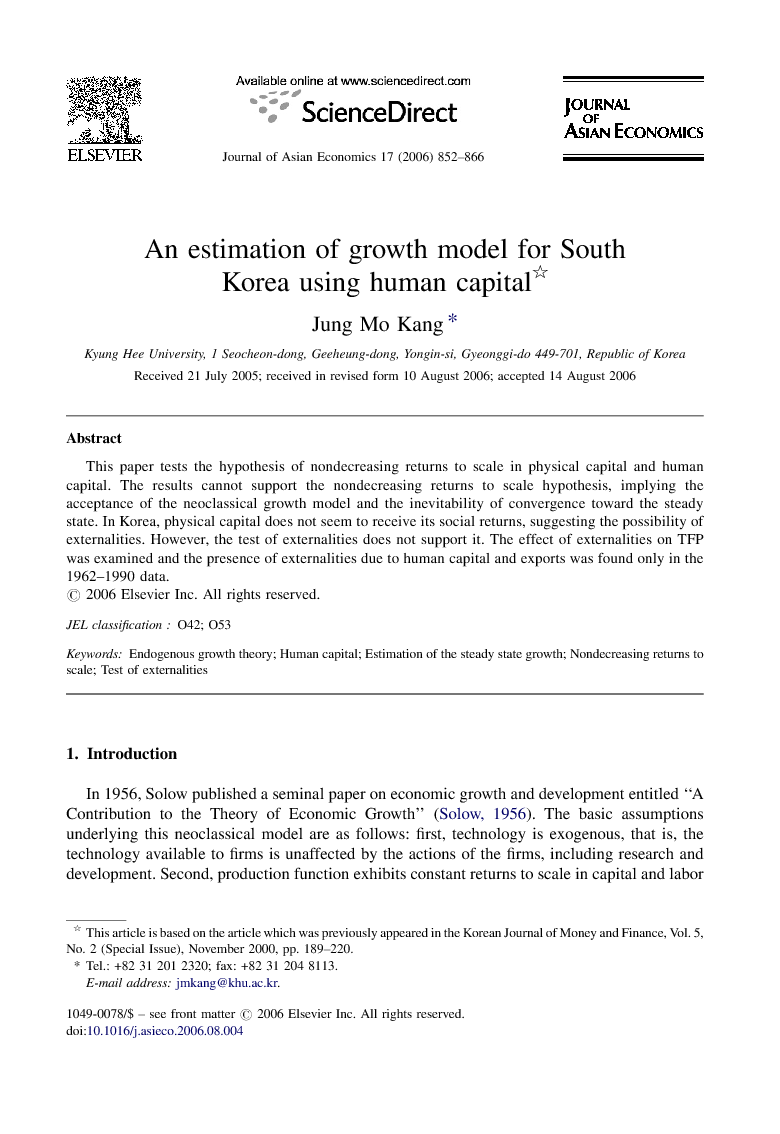 In 1956, Solow published a seminal paper on economic growth and development entitled “A Contribution to the Theory of Economic Growth” (Solow, 1956). The basic assumptions underlying this neoclassical model are as follows: first, technology is exogenous, that is, the technology available to firms is unaffected by the actions of the firms, including research and development. Second, production function exhibits constant returns to scale in capital and labor jointly, but diminishing returns to scale in capital and labor separately.1 The key implication of these assumptions is that an economy has a tendency to converge to a steady state in which per capita GDP would grow at a constant rate; therefore, any policy-induced “catch-up” may generate a rapid growth for underdeveloped economies only for a period of time, but the growth rate will eventually decelerate to the rate of exogenous technological change as the GDP gap between the developing economies and advanced economies is narrowed. However, by the 1980s it became more and more apparent that the neoclassical theory was inadequate in explaining the remarkable growth of newly emerging economies, especially that of the East-Asian economies. Out of this tension emerged a “new” growth theory which has come to be characterized as “endogenous” growth models. These models, developed by Romer, 1986, Romer, 1987 and Romer, 1990 and others gave focused on the role of human capital (i.e., ideas) as a main source of nondecreasing returns to scale. In the new growth theory, growth may continue indefinitely because the returns to capital in a broad class of capital goods, including human capital, may not necessarily diminish as economies grow. Instead of assuming that growth occurs because of exogenous improvement in technology, the endogenous growth theory focuses on the economic forces underlying technological progress. It recognizes that technological progress occurs as a result of the profit maximizing behavior of firms. Romer endogenizes technology progress by introducing the search for new ideas by researchers interested in profiting from their invention. In this model, “long-run” growth is driven primarily by the accumulation of knowledge (or human capital). Lucas draws on the theory of human capital in which each individual acquires productivity-enhancing skills by devoting time to such acquisition and away from paying work. The acquisition of skills by a worker not only increases his productivity but has a spillover effect on the productivity of all workers by increasing the level of skills in the economy as a whole. The spillover effect of human capital in the Lucas model and of the knowledge in the Romer model are externalities not internalized by individual agents. However, for the economy as a whole, they generate increasing scale economies even though the perceived production function of each agent exhibits constant returns to scale. The central point in their theory is that if the investment takes place under nondecreasing returns to scale, the marginal product of capital need not decline over time; hence, the incentive for capital accumulation may persist indefinitely. The main objective of the present paper is to test the key proposition of the endogenous growth model, namely the constant returns to scale in both physical and human capital using time series data for South Korea for the two overlapping periods, 1962–1990 and 1954–1990. The former represents the periods of rapid growth, while the latter includes all available data. The 1962–1990 data is likely to be of better quality than the 1954–1990 data. The test is conducted by estimating the augmented Solow (steady state) model, incorporating human capital in the production function. This paper also examines Lucas’ double effects of human capital accumulation: internal effects and external effects. The internal effect is the direct, the marginal product of capital for which the owner of the human capital is paid. The external effect is the externalities, the benefit available to others which the private individual may not realize. We also test for the externalities of exports, along with interaction effects among several key variables. In many of the past studies, e.g., by Barro (1991) and Barro and Sala-I-Martin (1995), Kyraicou (1991) and Mankiw, Romer, and Weil (1992), and King and Levine (1993), testing the importance of human capital was conducted by regressing cross-country data.2 The time series estimation of the role of human capital was recently conducted by Pyo (1995) for Korea using aggregate Cobb–Douglas function and Chou (1995) for Taiwan using Solow's steady state model. This study leads to several conclusions: first, the endogenous growth hypothesis of constant returns to scale in a broad class of capital goods cannot be supported. Second, the rejection of the constant returns to scale hypothesis implies the inevitability of convergence toward the steady state at which capital per worker, output per worker and consumption per worker will all grow at the rate of technological progress. Third, the neoclassical growth model in its original form, without human capital, seems to be capable of explaining the growth of the Korean economy and the inclusion of human capital does little in enhancing the explanatory power of the regression. The test also provides evidence of externalities due to human capital and exports. In what follows, the indirect estimation of parameters using Solow's steady state growth model is presented and parameter estimates of Solow's steady state model are examined in Section 2. Unit roots and cointegration are discussed in Section 3. To capture externalities, factors affecting total factor productivity growth are estimated in Section 4. A summary and conclusion is given in Section 5.

In this paper we have tested a hypothesis that is central to endogenous growth theory, namely constant (or increasing) returns to scale in total capital (physical and human). The test was performed using the neoclassical growth model with human capital. Several conclusions can be drawn from the empirical results. First, the augmented neoclassical model which incorporates human capital is capable of explaining the rapid growth of the Korean economy. Second, the endogenous growth hypothesis of constant returns to scale in a broad class of capital goods cannot be supported. Third, in spite of the widely acknowledged importance of human capital in the growth process, the estimated coefficient for human capital ranges from 0.08 to 0.31 using the Cobb–Douglas specification, and nearly zero in the estimate of the Solow's steady state model depending on what measure of the human capital is used. The extreme variability of the human capital coefficient is partly attributable to high multicollinearity between physical capital and human capital. Fourth, since TFP captures output growth not explained by the growth of factor inputs, we examined the externalities and interaction effect of several key variables on TFP growth, and observed the presence of externalities due to human capital and exports variables for the 1962–1990 period. We observed the interaction between human capital and exports and between labor and exports. Fifth, Romer and others interpreted a high coefficient of physical capital in the two factor production function as an indication of externalities of physical capital. In spite of the fact that the estimated physical capital coefficient (α) is larger than its actual income share, that is, physical capital does not seem to receive its social returns, our test shows no sign of externalities to the accumulation of physical capital. The implication of the result, namely, decreasing returns to scale in total capital, is that the Korean economy, like other economies, will eventually, if it has not already done so, converge toward a steady state where GDP per worker will grow at the rate of technological change. Furthermore, the observed decreasing returns to scale technology supports Krugman's assertion that the East-Asian miracles are no real miracle. The real miracle, however, is the remarkable speed of accumulation of capital.