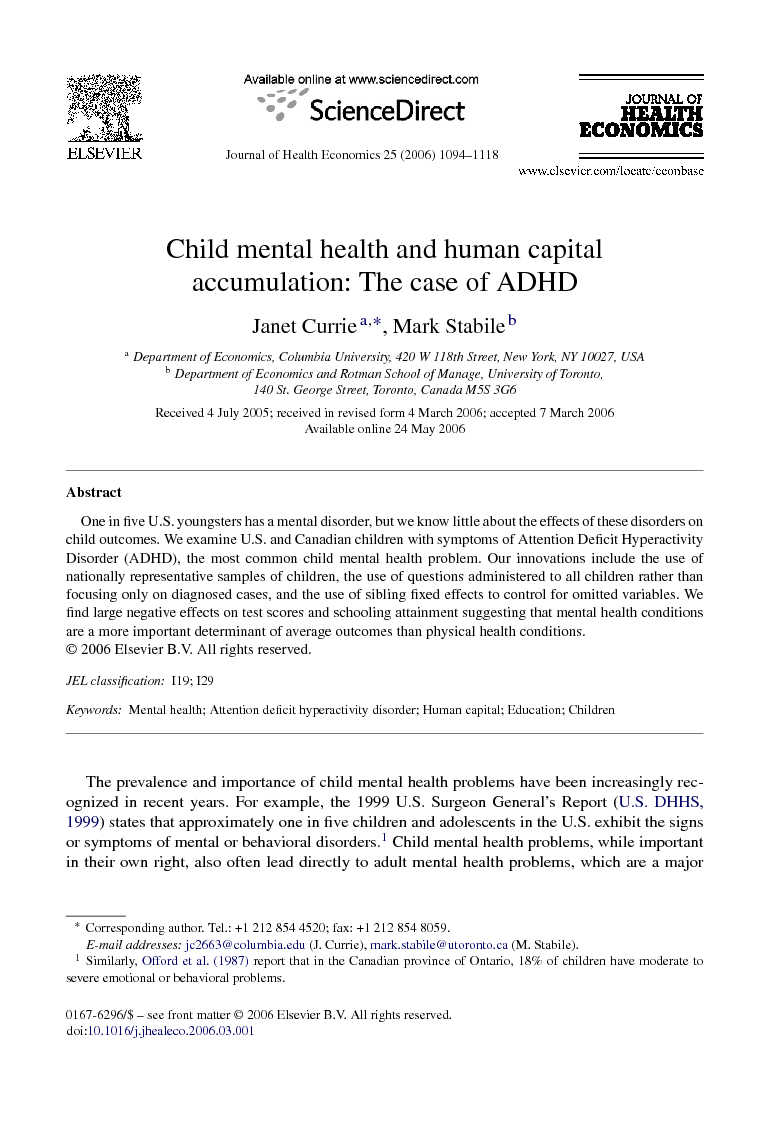 One in five U.S. youngsters has a mental disorder, but we know little about the effects of these disorders on child outcomes. We examine U.S. and Canadian children with symptoms of Attention Deficit Hyperactivity Disorder (ADHD), the most common child mental health problem. Our innovations include the use of nationally representative samples of children, the use of questions administered to all children rather than focusing only on diagnosed cases, and the use of sibling fixed effects to control for omitted variables. We find large negative effects on test scores and schooling attainment suggesting that mental health conditions are a more important determinant of average outcomes than physical health conditions.

The prevalence and importance of child mental health problems have been increasingly recognized in recent years. For example, the 1999 U.S. Surgeon General's Report (U.S. DHHS, 1999) states that approximately one in five children and adolescents in the U.S. exhibit the signs or symptoms of mental or behavioral disorders.1 Child mental health problems, while important in their own right, also often lead directly to adult mental health problems, which are a major cause of lost work time and health care costs.2 But mental health problems may also reduce adult earnings and employment indirectly by inhibiting the child's accumulation of human capital. While the economics literature recognizes that physical health problems can impede children's human capital accumulation (c.f. Grossman and Kaestner, 1997), the link between mental health problems and human capital accumulation has received little attention. Yet the incidence of most physical health problems among children is small, while the incidence of mental health problems is large, suggesting that these problems are likely to have a more important impact on average educational attainments (Currie, 2005). This paper examines the experience of North American children with symptoms of attention deficit hyperactivity disorder (ADHD), the most common chronic mental health problem among young children. It is difficult to find definitive estimates of the prevalence of ADHD. Most studies are based on diagnosed cases and there is considerable controversy about whether ADHD is over (or under) diagnosed, and even about whether it is actually an “illness”. Two studies based on screeners for ADHD found in large national studies found that 4–5% of American children met the diagnostic criteria for ADHD or had clinically significant symptoms (Jensen et al., 1999 and Cuffe et al., 2003). Clearly, ADHD affects large numbers of children. The few longitudinal studies that examine the effects of ADHD on child outcomes indicate that ADHD is associated with significantly worse outcomes. But it is possible that poorer outcomes reflect other problems suffered by children with ADHD. For example, in the U.S., estimated prevalence rates are almost twice as high in families with income less than $20,000 compared to families of higher income (Cuffe et al., 2003).3 Poor children with ADHD may also receive less effective treatment than other children, and thus be at “double jeopardy” for ill effects. We investigate these issues using data from the Canadian National Longitudinal Survey of Children and Youth, and the American National Longitudinal Survey of Youth. Our work offers a number of new contributions. First, it is problematic to focus only on diagnosed cases.4 Instead, we focus on a set of questions administered to all children in two large nationally representative longitudinal data sets. These questions are similar to the types of screening questions outlined by American Psychiatric Association for diagnosis of ADHD. Second, we address the possibility of omitted variables bias by estimating sibling-fixed effects models. Third, we examine a range of outcomes and compare the effects of ADHD to the effects of physical health conditions. We also examine the effects of ADHD symptoms in samples of children without any other diagnosed learning disabilities. Fourth, we ask how the effects of ADHD and the probability of treatment for ADHD are mediated by income. We show that ADHD symptoms increase the probability of future grade repetition and special education and reduce future reading and mathematics test scores. The effects are large relative to those of physical health problems such as chronic conditions: A score at the 90th percentile of the distribution of a hyperactivity score based on symptoms increases the probability of grade repetition by 6% in Canada, and by 7% in the U.S., while having been diagnosed with a chronic condition such as asthma does not have any significant effect. Surprisingly, income has little effect on the probability of treatment, and the test scores of higher income children are as much affected by symptoms of ADHD as those of lower income children, though higher income children are less likely to repeat grades. We find negative effects even among children whose relatively low levels of symptoms make it unlikely that they would ever be diagnosed or treated for ADHD. This finding suggests that if better ways could be found to teach the relatively small number of children diagnosed with ADHD, many other children with lower levels of symptoms might benefit.