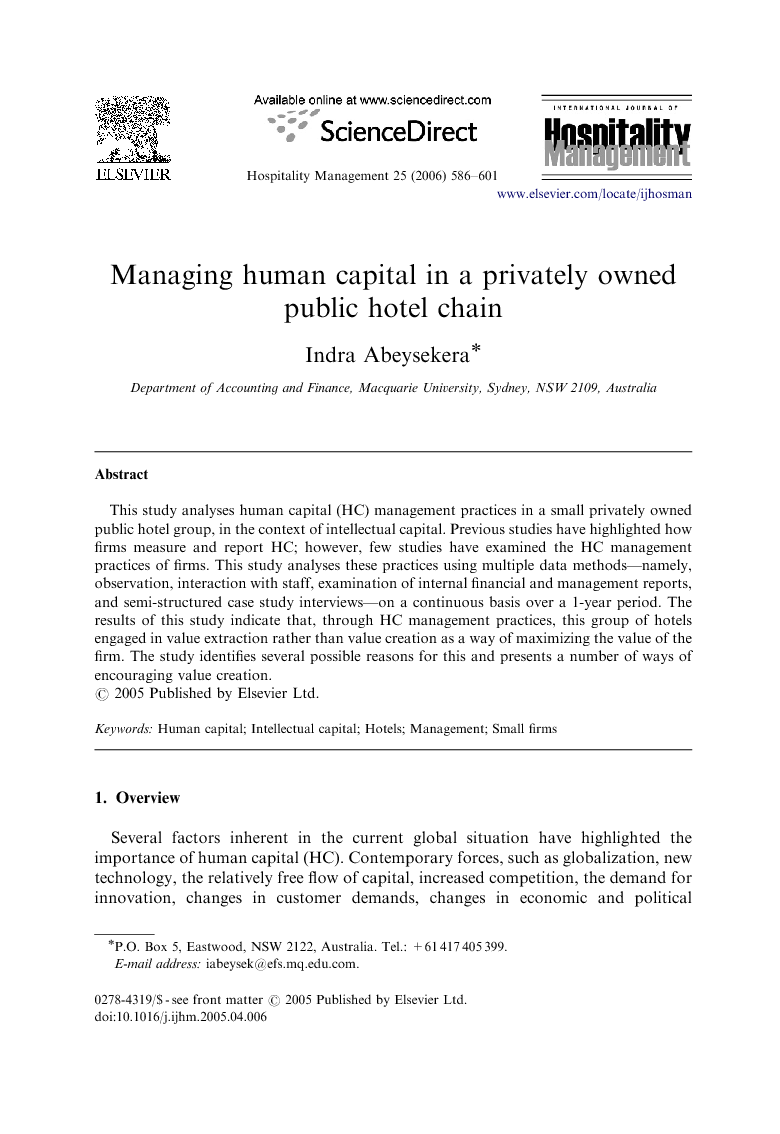 This study analyses human capital (HC) management practices in a small privately owned public hotel group, in the context of intellectual capital. Previous studies have highlighted how firms measure and report HC; however, few studies have examined the HC management practices of firms. This study analyses these practices using multiple data methods—namely, observation, interaction with staff, examination of internal financial and management reports, and semi-structured case study interviews—on a continuous basis over a 1-year period. The results of this study indicate that, through HC management practices, this group of hotels engaged in value extraction rather than value creation as a way of maximizing the value of the firm. The study identifies several possible reasons for this and presents a number of ways of encouraging value creation.

Several factors inherent in the current global situation have highlighted the importance of human capital (HC). Contemporary forces, such as globalization, new technology, the relatively free flow of capital, increased competition, the demand for innovation, changes in customer demands, changes in economic and political structures, and the growing role of the state in supporting knowledge economies, are constantly reshaping the way business is carried out (Buckley and Carter, 2000; Thorne and Smith, 2000; Volberda et al., 2001). Previous research has claimed that firms have begun to realize that technology-based competitiveness is transient, and that sustainable advantage lies in managing intangible resources such as HC (Johanson et al., 2001) and in a firm's ability to create value through managing knowledge (Lev, 2001; Sveiby, 2001). This paper presents the findings of research into the HC management practices of a group of privately owned small hotels in the public hotel industry in Australia. Four major factors motivated this study. First, although substantial research has previously been carried out into the HC measurement and reporting practices of firms (Bart, 2001; Zsidisin et al., 2003; Abeysekera and Guthrie, 2004), there is a dearth of research into HC management practices, and in particular into the practices of small firms. Second, there is a serious lack of case-based research that addresses the HC management practice of firms on a longitudinal basis. Third, stricter state government legislation relating to patrons consuming alcohol and playing gaming machines in Australia (Australian Hotelier, 2003) has heightened the importance of managing HC within the public hotel industry. Fourth, salaries and wages comprise a substantial cash outflow in proportion to the overall turnover of a public hotel, which highlights the financial impact of staff and staff-related costs on the profitability of a public hotel. In examining the HC management practices of a privately owned group of public hotels in Australia, the current research focuses on the process of value creation or value extraction in the context of intellectual capital (IC). Value creation can be described as making profits without the exploitation of labour, while value extraction can be described as making profits through the exploitation of labour (Macve, 1999). To put it another way, one could argue that HC management practices in value creation treat HC as an asset, and in value extraction HC management practices treat HC as cost. The paper is organized as follows. Section 2 provides a brief review of the IC literature, focusing on the management of the HC of a firm. Section 3 provides the theoretical background. Section 4 briefly outlines the research site and describes the research method employed to collect and analyse disclosures in the study (document analysis; data gathering through observation and interaction with staff). Section 5 presents empirical evidence and a discussion from the data analysis. Finally, Section 6 presents concluding remarks, noting the limitations of this study and providing suggestions for future research.

The findings presented in this paper suggest that the management control systems (including HC management systems) in place in the hotel chain under examination are geared towards the value extraction rather than the value creation of HC. The monthly management reports of the group showed that employees are used as a resource base for value extraction, through funding received from the government for off-the-job training. Further, the owner-directors keep a close eye on salaries, wages costs and employee numbers, ensuring that these are kept to a minimum, often at the expense of the long-term growth of the firm. These findings contrast with the current management thinking that promotes the notion of competitive advantage through the management of people as assets rather than as liabilities. Yet the findings of this study are consistent with the studies of Olsson (2001) and The Economist Intelligence Unit (1998), which point out that, although most firms assert that people are their most important asset—making it reasonable to expect that firms would do all they can to enrich that asset for value creation—in fact the converse is true. This may be because, in a rapidly changing business environment where employment mobility has become the norm, firms expect employees to take a greater responsibility for enhancing their own HC value. Thus, the study highlights two issues in relation to the training, know-how and entrepreneurial skills of employees in public hotels. First, it highlights that employees need to continually upgrade their skills by taking opportunities for skills training, if they are to attain job security. Second, employers need to recognize the positive value that training has on employee productivity and should invest in both on-the-job and off-the-job training. This study also has policy implications for HC value creation. The findings suggest that the government should take a proactive role in ensuring that employees are trained, by providing incentives and implementing monitoring systems. The government could also set minimum qualifications and a lead time period to ensure that employees are formally trained through both on-the-job and off-the-job training programs. This study has three limitations. First, the ownership structure, level of gearing, group size and industry type of the hotel chain under examination may limit the generalizability of the findings. Second, although the validity and reliability of the method and outcomes of the study was strengthened by the use of multiple data-collection methods, the research setting cannot be replicated, as business processes and systems change over time, and access to this privately owned group of firms is restricted. Third, since the same researcher both collected the data and analysed the data, there may have been some observer-caused effects and interviewer-bias effects on the interpretation of the data. Despite these limitations, the insights and practical suggestions of this study provide a foundation for further research. Future studies could be undertaken to validate the present findings in relation to different ownership structures (such as partnerships, sole traders), different sizes of firms and other industries. For example, the question of how firms still survive in the long term under circumstances of HC value extraction could be examined. Alternatively, a study could be undertaken on the relationship between HC value extraction or creation and the firm achieving its stated business goals. Another study could analyse the relationship between employee training and customer satisfaction, in which customer satisfaction could be measured using customer evaluation or complaint forms as the source documents.