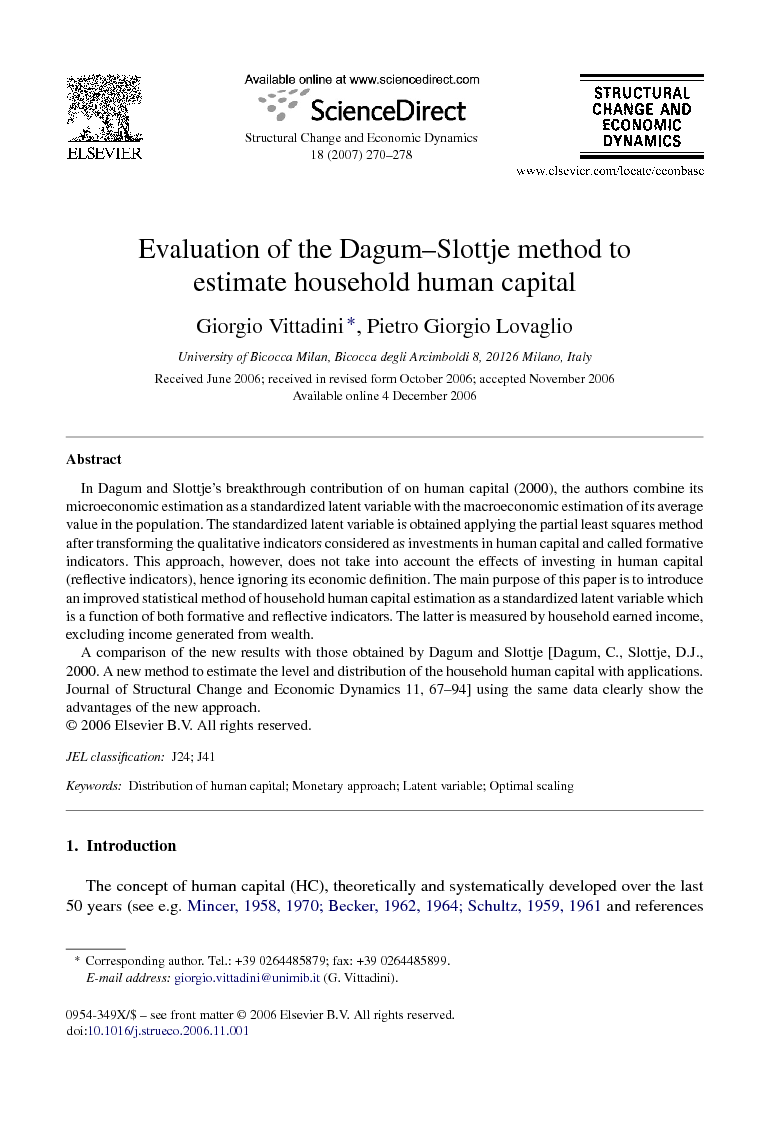 In Dagum and Slottje's breakthrough contribution of on human capital (2000), the authors combine its microeconomic estimation as a standardized latent variable with the macroeconomic estimation of its average value in the population. The standardized latent variable is obtained applying the partial least squares method after transforming the qualitative indicators considered as investments in human capital and called formative indicators. This approach, however, does not take into account the effects of investing in human capital (reflective indicators), hence ignoring its economic definition. The main purpose of this paper is to introduce an improved statistical method of household human capital estimation as a standardized latent variable which is a function of both formative and reflective indicators. The latter is measured by household earned income, excluding income generated from wealth. A comparison of the new results with those obtained by Dagum and Slottje [Dagum, C., Slottje, D.J., 2000. A new method to estimate the level and distribution of the household human capital with applications. Journal of Structural Change and Economic Dynamics 11, 67–94] using the same data clearly show the advantages of the new approach.

The concept of human capital (HC), theoretically and systematically developed over the last 50 years (see e.g. Mincer, 1958, Mincer, 1970, Becker, 1962, Becker, 1964, Schultz, 1959 and Schultz, 1961 and references therein) has been traditionally estimated in literature by either the retrospective (Cantillon, 1755, Engel, 1883, Kendrick, 1976 and Eisner, 1985) or prospective methods (Farr, 1853, Dublin and Lotka, 1930 and Jorgenson and Fraumeni, 1989). In a recent study, Dagum and Slottje (2000) showed that these estimation methods have very serious shortcomings. The first, dealing with the cost of production, does not take into account social costs such as public investment in education, home conditions and community environments, health and other genetic conditions. Furthermore, no consideration is made on the real effects of HC investments on households’ income and wealth. On the other hand, the prospective method uses an actuarial approach, originally introduced by Farr (1853) to estimate individual HC. In this context, HC is defined as the present actuarial value of an individual's expected earned income net of wealth related to his skill, acquired abilities, and education. The prospective method reduces HC investment to its monetary value in terms of only an assumed flow of earned income net of wealth and hence, ignores the amount of investment in education, job training and others. Le et al. (2003) show in depth the shortcomings of both approaches. In order to estimate HC, Dagum and Slottje (2000) combine the microeconomic estimation of HC as a standardized latent variable with the macroeconomic estimation of the average HC of a population of economic units. The estimated value of the household HC in the sample survey is obtained by applying the partial least squares method after having transformed the qualitative indicators following Young (1981). The main purpose of this paper is to introduce a method of estimation of HC as a standardized latent variable (LV) consistent with its economic definition. Hence, HC is treated as a latent variable measured by a set of observed mixed indicators in a path analysis model. The standardized estimates of HC consider the definitions advanced for an LV in a path analysis model with respect to formative and reflective indicators. Section 2 introduces the new statistical definition of HC as a latent variable. Section 3 briefly discusses existing LV statistical models and points out to their limitations in the present context. Section 4 presents a new method where HC is estimated as a standardized LV which corresponds to its economic definition. First, only quantitative indicators are taken into account, and second, the approach is extended to a mixture of quantitative and qualitative indicators. Section 5 compares the new results with those obtained by Dagum and Slottje (2000) using the same data.

This paper estimates household HC as a latent variable within a logically consistent model specified in agreement with the accepted economic definition of HC. The shortcomings of current LV estimation methods are underlined, particularly, the factor model and partial least squares (PLS) in the context of HC definition. More specifically HC is estimated as an “unknown composite variable” of formative indicators (causes of HC) that have the highest causal impact on the reflective indicator earned income (effect of HC). In particular, the proposed method uniquely estimates the scores of HC from mixed (nominal, ordinal, interval) observed variables, within a causal model framework, respecting the specified causal relations, while avoiding treating formative indicators as reflective, and vice versa (Vittadini and Lovaglio, 2001). The improvement of the proposed method, as compared to the Dagum–Slottje proposal, consists of a measurement model which is more consistent with the economic definition of HC, reflected by better goodness of fit indices and better interpretability of results (the significance and the signs of formative indicators are in accordance with the expected relationships between formative and reflective variables). From a methodological point of view, further research will be addressed to the estimation of a simultaneous equations causal model in order to better investigate short and long term multipliers which measure the direct and total effects of the predetermined variables determining household HC. Finally, more in-depth analysis with more recent data will verify if a significant amount of U.S. household income (at least for those in the middle class and above) stems from financial and real estate assets such as dividends, interest, rents and so on, as has emerged in the present application.