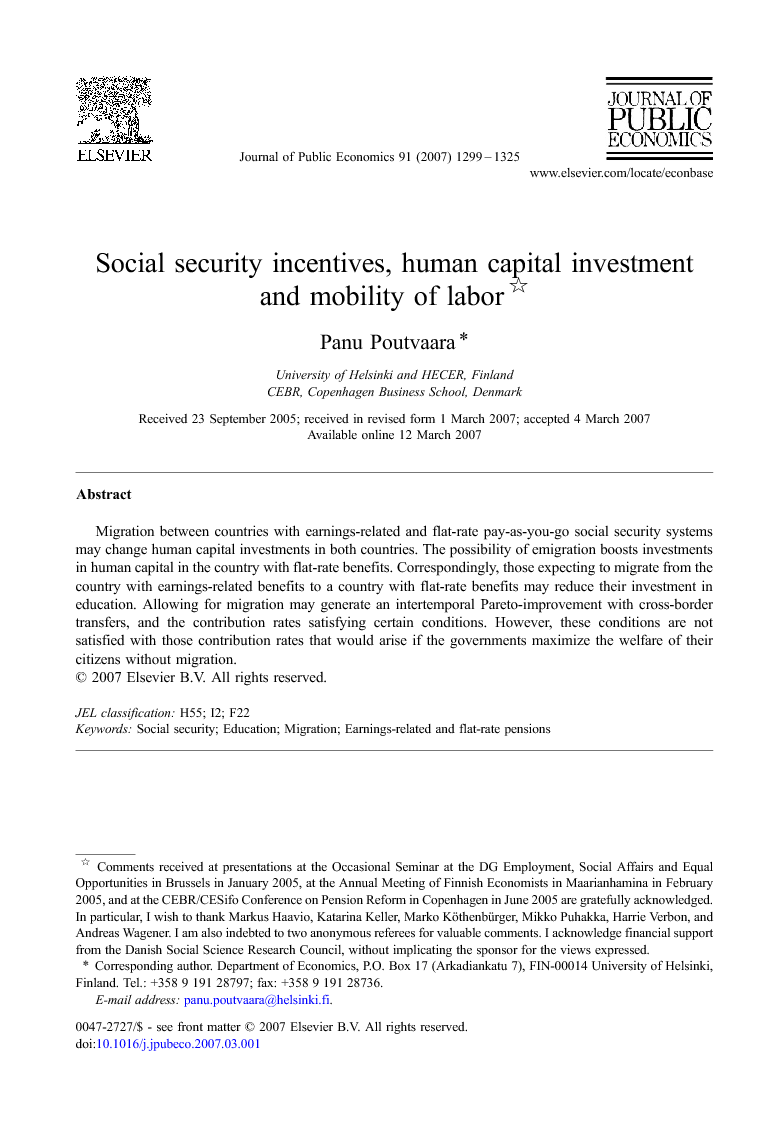 Migration between countries with earnings-related and flat-rate pay-as-you-go social security systems may change human capital investments in both countries. The possibility of emigration boosts investments in human capital in the country with flat-rate benefits. Correspondingly, those expecting to migrate from the country with earnings-related benefits to a country with flat-rate benefits may reduce their investment in education. Allowing for migration may generate an intertemporal Pareto-improvement with cross-border transfers, and the contribution rates satisfying certain conditions. However, these conditions are not satisfied with those contribution rates that would arise if the governments maximize the welfare of their citizens without migration.

This paper derives some expected and some rather surprising results on the effects of allowing migration between countries with different social security systems. As expected, there is some cutoff productivity level above which citizens prefer earnings-related systems, and below which they would rather have flat-rate benefits. This cutoff level may also be associated with a corner solution, with all citizens preferring one of the competing systems. Moreover, the possibility of migration from a flat-rate system to an earnings-related system stimulates human capital formation. Conversely, those willing to migrate to a country with flat-rate benefits may reduce their investment in education. Allowing for free migration may, but need not, pose problems for either system. Perhaps the most surprising result is that allowing for migration could generate an intertemporal Pareto-improvement even in the absence of any productivity differences between the two countries and with unilateral migration. This requires that migration would go from the country with flat-rate benefits to the country with earnings-related benefits, and that the latter country would have either the same or higher contribution rate. Moreover, generating an intertemporal Pareto-improvement with unilateral migration, if feasible in the first place, would require that the destination country with earnings-related benefits transfer part of the tax revenue of immigrants to their country of origin, during the transition period. Even the possibility of such a Pareto-improvement would not arise in the absence of endogenous human capital formation, highlighting the importance of taking into account investments in education when analyzing the welfare effects of labor market integration. This paper focuses on the efficiency implications and welfare effects of migration between two countries with given social security contribution rates. This is only a first step in exploring the welfare effects of migration in democracies. An important topic for future research would be to endogenize contribution rates. This paper takes a first step in this direction, by solving for the political equilibrium contribution rates that the governments maximizing the weighted sum of the welfare of the elderly and the currently young generation would choose in the absence of migration. Already this suffices to prove that the potential Pareto-improvements identified may not materialize with contribution rates that arise from an endogenous political process. It remains for future work to identify the equilibrium contribution rates that would arise from a political process over the full transition path, as well as to evaluate empirically the magnitude of the different theoretical effects that this paper identifies.