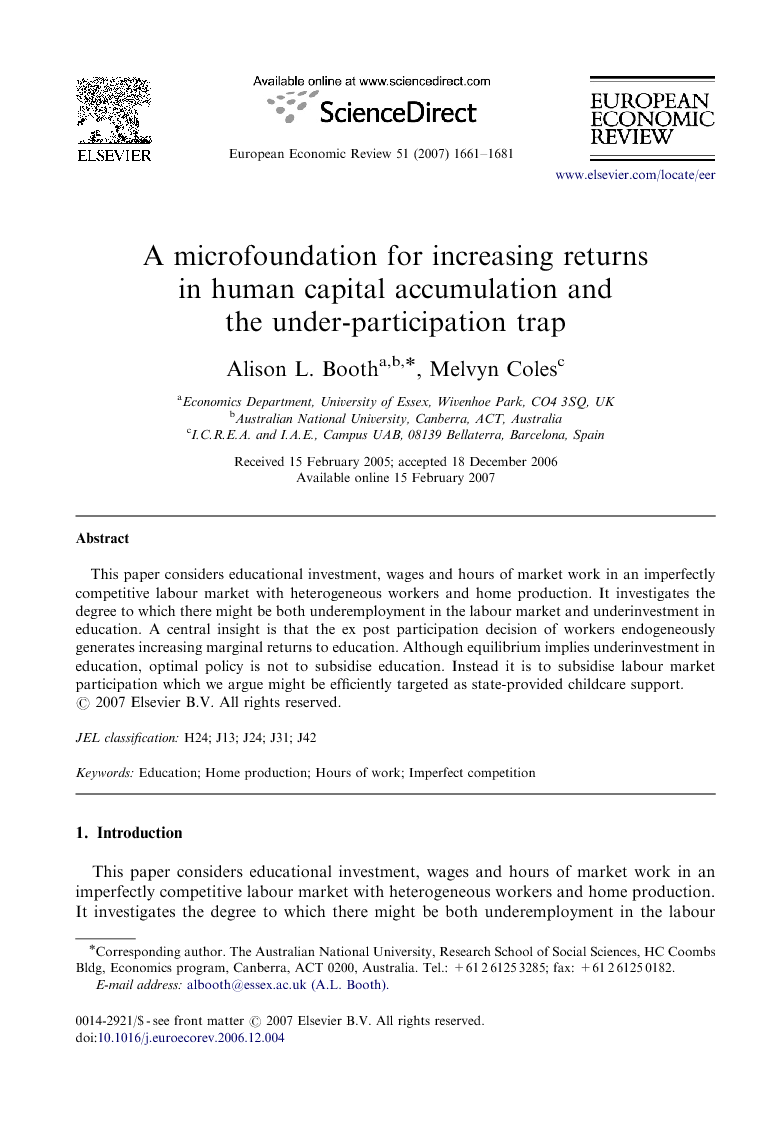 This paper considers educational investment, wages and hours of market work in an imperfectly competitive labour market with heterogeneous workers and home production. It investigates the degree to which there might be both underemployment in the labour market and underinvestment in education. A central insight is that the ex post participation decision of workers endogeneously generates increasing marginal returns to education. Although equilibrium implies underinvestment in education, optimal policy is not to subsidise education. Instead it is to subsidise labour market participation which we argue might be efficiently targeted as state-provided childcare support.

It is surprising that the increasing returns argument presented here has received no attention in the profession. Possibly it has been missed as there are decreasing marginal returns to labour supply and, given labour supply, there are also decreasing returns to education. Of course this does not imply a concave programming problem as there are joint increasing returns. When decisions are sequential, as in the hold-up problem considered here, these joint increasing returns generate increasing marginal returns to education in the first period. We have shown that, in an imperfectly competitive labour market, increasing returns to education generate an under-participation trap. Optimal corrective policy is an employment subsidy, which we argue might be efficiently targeted as a public childcare program. A popular alternative model of an imperfectly competitive labour market assumes instead search frictions and that wages are determined by Nash bargaining. In particular given (α,b)(α,b) and free entry of firms, the axiomatic Nash bargaining approach would imply the firm negotiates profit ππ and labour supply l as View the MathML sourcemaxπ,l[π]1-γ[αl-π+bx(1-l)-bx(1)]γ, Turn MathJax on where γ∈[0,1]γ∈[0,1] is the worker's bargaining power, bx(1)bx(1) is the worker's threatpoint [i.e. the value of home production] and the firm's threatpoint is zero in a free entry equilibrium. By definition of V in the text, this reduces to View the MathML sourcemaxπ[π]1-γ[V-π]γ Turn MathJax on and Nash bargaining implies worker remuneration y*y* satisfies dy*/dV=γdy*/dV=γ. As in Claim 1, this implies equilibrium wage compression and so one would anticipate the same effects on education and participation as discussed here. But there are two main advantages to the Bhaskar and To (1999) approach. One is that it rules out search externalities, such as thick market and congestion externalities, which would otherwise complicate the policy discussion. It also does not require solving for the steady-state distribution of job seeker productivities which, in equilibrium, affects the vacancy creation decision of firms. The simpler approach shows clearly that under-participation and wage compression generate mutually reinforcing distortions on human capital investment: Wage compression implies workers tend to underinvest in workplace skills, and lower skills imply a lower participation probability which further reduces the expected return to human capital accumulation. In currently ongoing work we examine how increasing returns to education interact with various other market distortions such as (i) endogenous household formation with matching frictions in the marriage market (Booth and Coles, 2005); and (ii) government tax policy, where increasing returns to education causes large substitution effects, and hence large deadweight losses, around the non-participant margin (Booth and Coles, 2006). In a third paper, we show that increasing returns to education arise even in a perfectly competitive labour market (Booth et al., 2006) and identify these effects empirically using individual-level data.