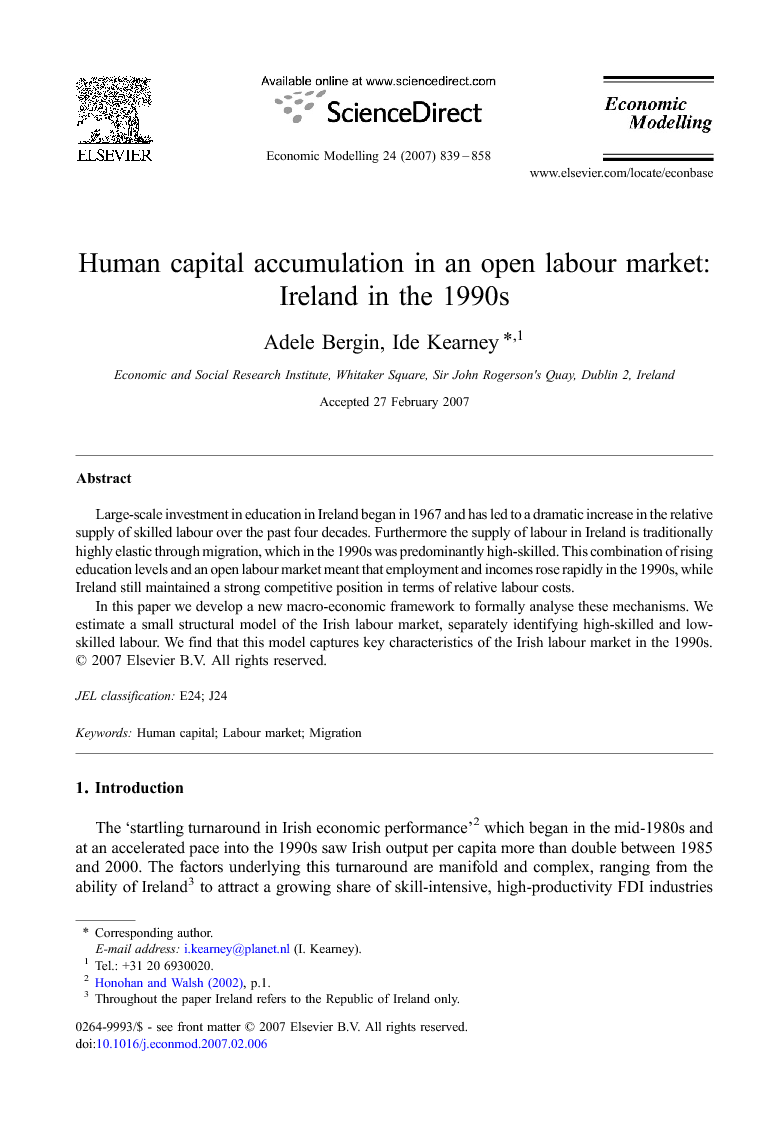 Large-scale investment in education in Ireland began in 1967 and has led to a dramatic increase in the relative supply of skilled labour over the past four decades. Furthermore the supply of labour in Ireland is traditionally highly elastic through migration, which in the 1990s was predominantly high-skilled. This combination of rising education levels and an open labour market meant that employment and incomes rose rapidly in the 1990s, while Ireland still maintained a strong competitive position in terms of relative labour costs. In this paper we develop a new macro-economic framework to formally analyse these mechanisms. We estimate a small structural model of the Irish labour market, separately identifying high-skilled and low-skilled labour. We find that this model captures key characteristics of the Irish labour market in the 1990s.

In this paper we have developed a small macro-economic model to capture some key features of the Irish labour market in the 1990s. The demand for labour in the model is driven by very strong world demand for Irish output, especially in the 1990s. Furthermore the demand for labour is strongly trended towards the employment of high-skilled labour. Because Ireland is an SOE the demand for output is sensitive to international competitiveness. Against this background of strong growth in output and employment we explore the impact of rising human capital accumulation. To do this we split the labour supply decision into two mutually exclusive theatres. In the first theatre high-skilled labour is highly mobile and stays/goes in response to relative wage conditions in Ireland and abroad. This means that there is no structural unemployment in the high-skilled labour market. In the second theatre low-skilled labour is immobile, and participation is driven by the gap between the going wage and the replacement social welfare rate. If this gap is too narrow then unemployment will rise. These two markets are only linked through (exogenous) public investment in education which turns a low-skilled worker into a high-skilled worker. This framework can help interpret how the dramatic rise in employment and incomes in Ireland in the 1990s was possible without a deterioration in competitiveness. Rising education levels increased the relative supply of high-skilled labour, which together with in-migration flows of high-skilled workers meant that it was possible to meet the strong rise in demand for labour without endangering competitiveness.