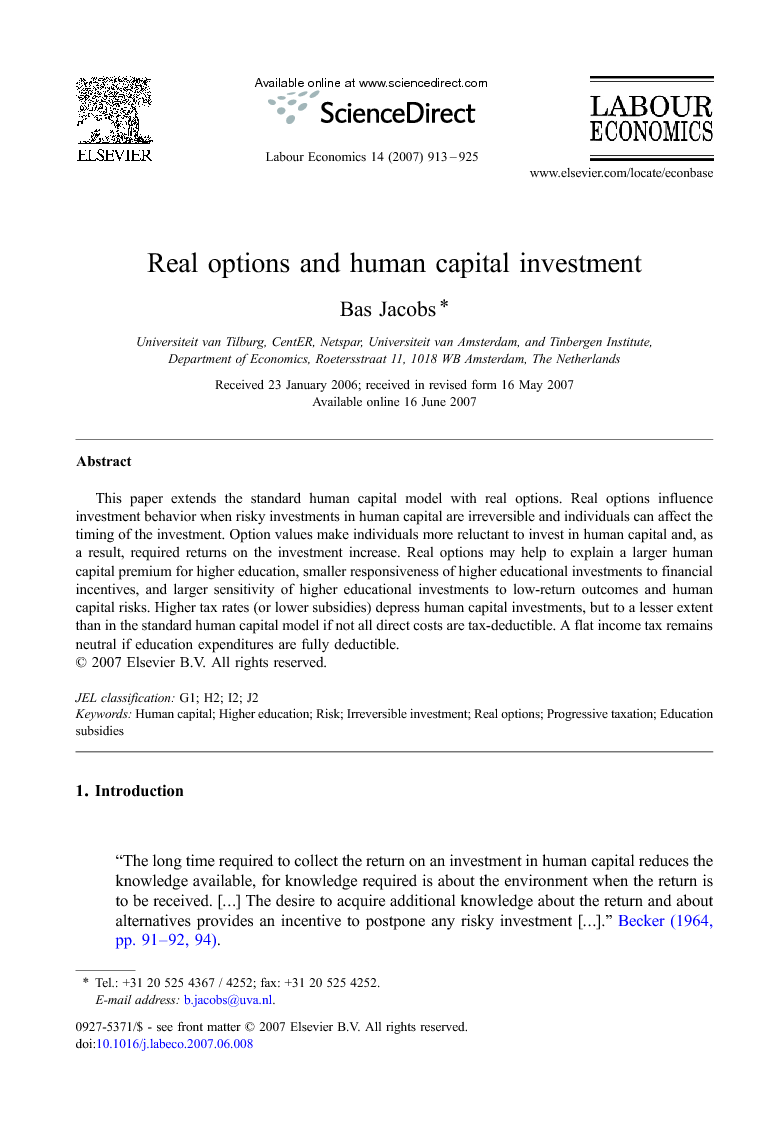 This paper analyzed the consequences of real options in human capital investments. Human capital investments are both risky and largely irreversible. It is generally impossible to recover forgone labor earnings and paid tuition fees. If individuals can influence the timing of the investment, i.e., decide to go to higher education now or later, option values will influence investment behavior. This paper has shown that with perfect financial markets, the option to postpone investment could explain why returns to education are high, why investment in human capital is not very sensitive to returns, taxes and subsidies, and why students are rightly concerned with low return outcomes. These findings can be relevant in explaining various empirical findings. Options may offer an explanation as to why skill-premia for higher educated workers are high. Returns should be high because they compensate for the lost option value of waiting once individuals make the irreversible investments in education. This is an equilibrium outcome which does not require incompleteness of financial markets. This paper has shown that option values tend to make human capital investments less responsive to the net returns of the investments compared to the standard human capital model. This may help to explain findings that enrolment does not appear to be very price responsive. The empirical picture appears to be that doubling tuition costs will decrease enrolment rates with roughly 5–10%-points after controlling for selection effects, see recent estimates provided in Kane, 1994 and Kane, 1995, Hilmer (1998), Heckman et al. (1998), Card and Lemieux (2000), Cameron and Heckman (2001), and Dynarski (2003). Option values may also help to explain why returns to education are larger in countries with larger income inequality, insofar as inequality reflects labor market risk.8 In more risky labor markets, option values of postponing investments in education increase, and students need to be compensated for giving up the option to wait with higher returns. OECD (2006) data reveal that income inequality is typically larger in countries with high Mincer returns to education, as estimated by Harmon et al. (2003). Hence, the data are not inconsistent with the prediction that larger returns on education should be found in more risky labor markets. Option values can be an important reason why students wait with enrolment in higher education. However, the vast majority of high school graduates immediately enrolls in higher education. The observation that many students do not wait to enroll may is not a direct refutation of the model presented in this paper. Students will enroll immediately as long as rates of return to education are high enough to give up their valuable waiting option to enroll later. The analysis of other types of options could be relevant for future research. No research exists on the option to terminate the investment in initial education, i.e., to drop out, when the investment turns out to be unprofitable. There could also be an option to switch from initial education to OJT investments or from general education to vocational education in case the latter becomes more profitable compared to the former. There can also be compound options when there is some combination of options involved in the investment in human capital. Furthermore, the model of this paper could be cast in a continuous time framework similar to examples in Dixit and Pindyck (1994). This would allow for an empirically grounded analysis to study the potential explanatory powers of the model. One could then also allow for a variety of stochastic processes describing the returns to the investment. A more in depth treatment of cost uncertainty could also be analyzed in more detail. This paper assumed that costs were exogenous and not time-varying. Cost uncertainty is equivalent to what Levhari and Weiss (1974) call ‘input-uncertainty’, i.e., the uncertainty about individual capacities. If cost uncertainty decreases when the project is undertaken, there may be reasons to start investing immediately even if the net present value is negative. This is related to the growth options in sequential investments as discussed in Comay et al (1973) and Heckman et al. (2006). Further, the impact of options on the distribution of wages would be interesting to investigate in a general equilibrium setting in which wages of skilled and unskilled workers are endogenously determined. Finally, interactions of options in human capital investment with various types of capital and insurance market failures may be a promising avenue for future research.