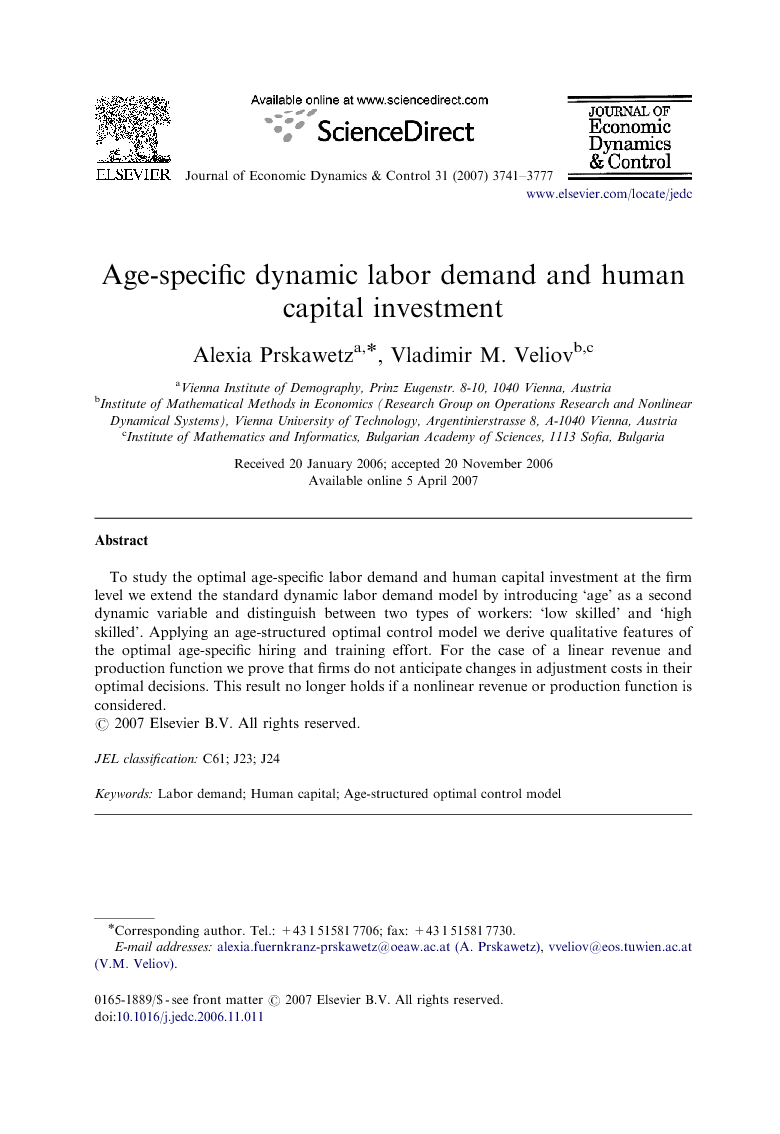 To study the optimal age-specific labor demand and human capital investment at the firm level we extend the standard dynamic labor demand model by introducing ‘age’ as a second dynamic variable and distinguish between two types of workers: ‘low skilled’ and ‘high skilled’. Applying an age-structured optimal control model we derive qualitative features of the optimal age-specific hiring and training effort. For the case of a linear revenue and production function we prove that firms do not anticipate changes in adjustment costs in their optimal decisions. This result no longer holds if a nonlinear revenue or production function is considered.

Changes in the age distribution and skill distribution of the workforce and its implications for labor market outcomes (such as wages and employment patterns) have been extensively studied in the empirical labor market literature. Age and skill heterogeneity has, however, been neglected in the classical labor demand models at the firm level that aim to build the micro-foundations for observed employment patterns and skill compositions at the aggregate level. The aim of our paper is to extend the theoretical framework and introduce age structure into a classical model of dynamic labor demand and to allow for human capital upgrading at the firm level. To capture the heterogeneity of workers by age and human capital we introduce ‘age’ as a second dynamic variable and distinguish between two types of workers: unskilled versus skilled workers. While the age structure has been introduced into the neoclassical theory of optimal investment in several recent contributions, the introduction of age into the classic dynamic labor demand model constitutes a novel approach. As empirical data show (cf. Fig. 1), the employment structure follows a clear hump-shaped age pattern at the firm level and the age pattern itself is rather dynamic indicating an aging of the labor force. Within the framework of our proposed model we show that these stylized facts may be the result of an optimal age-specific labor demand at the firm level. We establish a number of qualitative features of the optimal age-specific hiring and training policies and the mean age of hiring as it will depend on the age structure of the adjustment costs. We motivate a change in the adjustment costs of labor by changes in the demographic structure of the labor supply. For the case of linear revenue and production functions, the optimal policy is not influenced by changes in the adjustment cost functions prior to the point in time when the changes have been introduced. We term this fact the non-anticipation property (similar to a finding in the capital investment literature, cf. Feichtinger et al., 2005b). Our results are not only valid for the stationary case but hold for the transient behavior as well. We also show that optimal investment in human capital remains unaffected by changes in the adjustment costs as long as we postulate that human capital investment does not require fixed costs. Under further assumptions (e.g., the surplus between age-specific productivity and wages decreases over age) we can prove that firms always hire more younger than older workers, a phenomenon clearly supported by empirical data and the theoretical literature. Once we allow for nonlinear revenue and production functions the non-anticipation property breaks down. Firms then adjust their optimal labor demand well in advance of the time when adjustment costs are going to change. Many of the results obtained are quite intuitive: e.g., an increase in adjustment costs at every age leads to a temporary increase in hiring, lowering the mean age of hiring and increasing the human capital investment already several years before the change takes place. Once the change in adjustment costs of labor has taken place, firms will react as predicted by our analytical results in the case of the linear production and revenue function. While our results are promising, further analysis requires various extensions. Our production function only includes labor as input, an obvious extension of our framework is to allow for physical capital in addition to human capital. So far we assume that low-skilled workers (and high-skilled workers, resp.) of different ages are perfectly substitutable. An extension of the model could also allow for different elasticities of substitution between workers of different ages within and between skill groups. The most interesting ultimate aim may be a double vintage structure (of capital and labor). Within such a framework one could allow for the fact that workers of different ages are often associated with capital of different vintage. A further extension of the model could assume a more general adjustment cost function, allowing for asymmetry and fixed costs. Obviously, empirical estimations on adjustment costs that are age specific are missing and should be a further topic of research. Another promising extension of our framework could be the introduction of job duration as a further dimension of heterogeneity of labor, in addition to age. Our model constitutes only a partial equilibrium analysis and an extension to a general equilibrium model would constitute an important next step. Obviously, such an approach would require to merge the firm-level labor demand model with the macro-level economic framework that includes endogenous wage setting. Notwithstanding these extensions, our framework should be regarded as a first important attempt to introduce age structure into models of dynamic labor demand. It is to be hoped that the vintage of labor demand will gain a similar role in economic theory as the promising and growing literature of vintage capital investment.