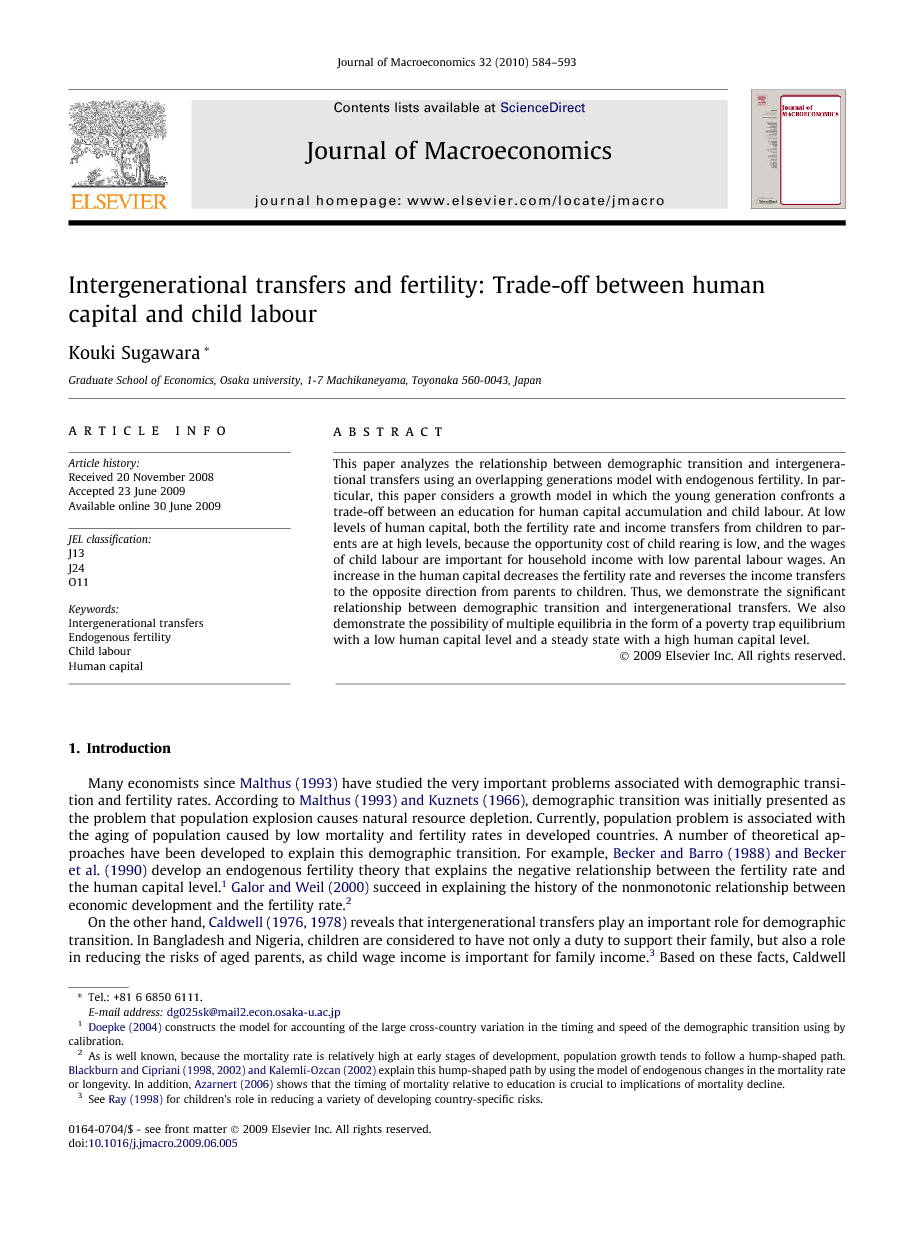 This paper analyzes the relationship between demographic transition and intergenerational transfers using an overlapping generations model with endogenous fertility. In particular, this paper considers a growth model in which the young generation confronts a trade-off between an education for human capital accumulation and child labour. At low levels of human capital, both the fertility rate and income transfers from children to parents are at high levels, because the opportunity cost of child rearing is low, and the wages of child labour are important for household income with low parental labour wages. An increase in the human capital decreases the fertility rate and reverses the income transfers to the opposite direction from parents to children. Thus, we demonstrate the significant relationship between demographic transition and intergenerational transfers. We also demonstrate the possibility of multiple equilibria in the form of a poverty trap equilibrium with a low human capital level and a steady state with a high human capital level.

In this paper, we have investigated the Caldwell hypothesis in an overlapping generations model of endogenous fertility. This model emphasizes that intergenerational transfers play an important role in fertility. In this model, we obtain a positive relationship between the fertility rate and net transfers from children to parents. In addition, both the fertility rate and net transfers from children to parents decrease with an increase in human capital. These cases represent the demographic transition history of the real world that is explained by Caldwell. Thus, the use of intergenerational transfers as a factor in fertility choice would contribute to the demographic transition theory. In this paper, we have incorporated the issue of child labour in order to explain the relationship between demographic transition and intergenerational transfers. We observe that in poor economies, parents force children to work and parents will have more children if parents’ income crucially depends on the income of the children. Meanwhile, child labour gives rise to many specific problems.21 Child labour impedes a child’s education and economic development. In fact, there is a high level of child labour because of a low household income in developing countries. As a consequence, because the educational level remains at a low level, the economy falls into a poverty trap. We can explain this poverty trap in this model as caused by the low educational level because of poverty. Thus, this model is able to answer why child labour exists in developing countries. If the economy falls into a poverty trap as explained by Caldwell, the model provides us with policy implications, such as compulsory education or banning child labour, etc.