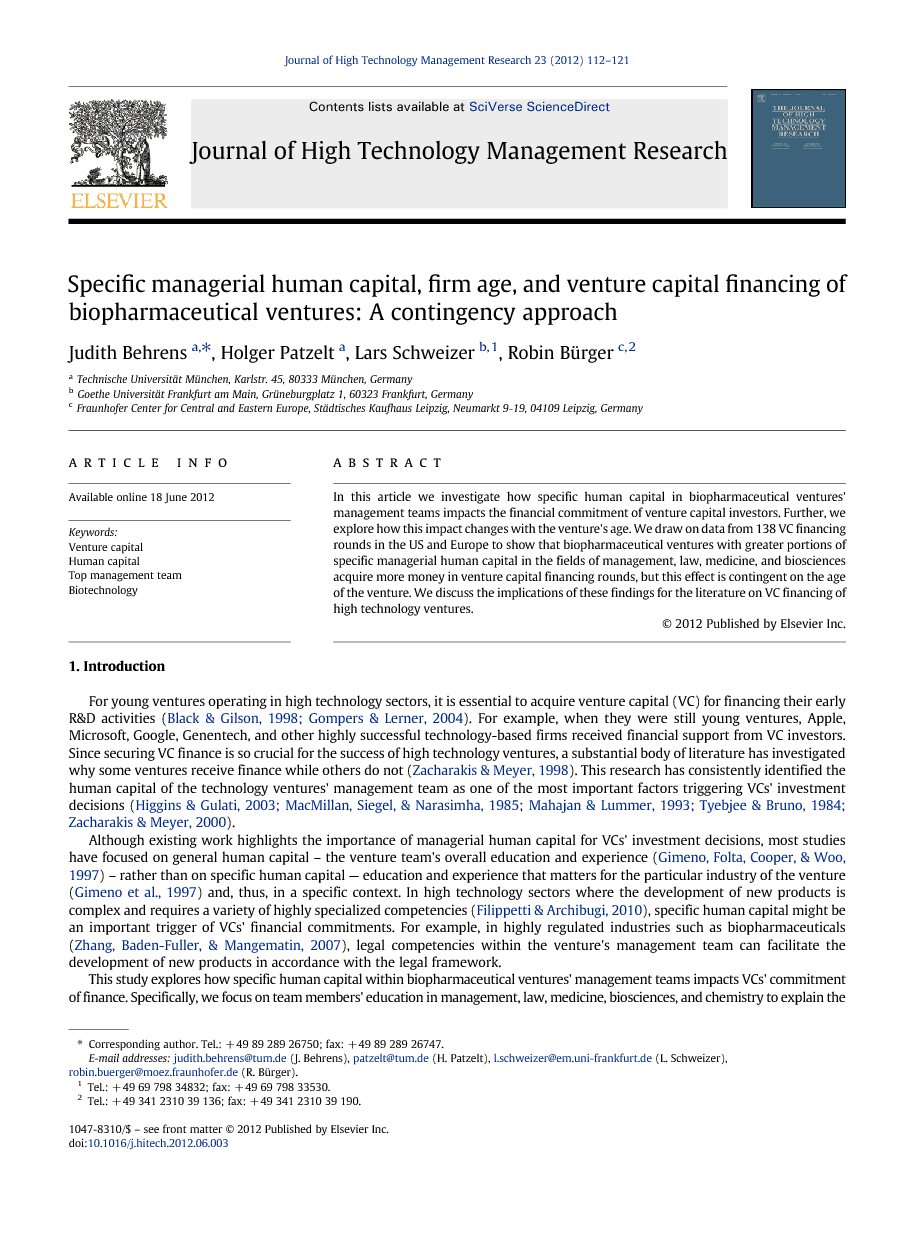 In this article we investigate how specific human capital in biopharmaceutical ventures' management teams impacts the financial commitment of venture capital investors. Further, we explore how this impact changes with the venture's age. We draw on data from 138 VC financing rounds in the US and Europe to show that biopharmaceutical ventures with greater portions of specific managerial human capital in the fields of management, law, medicine, and biosciences acquire more money in venture capital financing rounds, but this effect is contingent on the age of the venture. We discuss the implications of these findings for the literature on VC financing of high technology ventures.

For young ventures operating in high technology sectors, it is essential to acquire venture capital (VC) for financing their early R&D activities (Black and Gilson, 1998 and Gompers and Lerner, 2004). For example, when they were still young ventures, Apple, Microsoft, Google, Genentech, and other highly successful technology-based firms received financial support from VC investors. Since securing VC finance is so crucial for the success of high technology ventures, a substantial body of literature has investigated why some ventures receive finance while others do not (Zacharakis & Meyer, 1998). This research has consistently identified the human capital of the technology ventures' management team as one of the most important factors triggering VCs' investment decisions (Higgins and Gulati, 2003, MacMillan et al., 1985, Mahajan and Lummer, 1993, Tyebjee and Bruno, 1984 and Zacharakis and Meyer, 2000). Although existing work highlights the importance of managerial human capital for VCs' investment decisions, most studies have focused on general human capital – the venture team's overall education and experience (Gimeno, Folta, Cooper, & Woo, 1997) – rather than on specific human capital — education and experience that matters for the particular industry of the venture (Gimeno et al., 1997) and, thus, in a specific context. In high technology sectors where the development of new products is complex and requires a variety of highly specialized competencies (Filippetti & Archibugi, 2010), specific human capital might be an important trigger of VCs' financial commitments. For example, in highly regulated industries such as biopharmaceuticals (Zhang, Baden-Fuller, & Mangematin, 2007), legal competencies within the venture's management team can facilitate the development of new products in accordance with the legal framework. This study explores how specific human capital within biopharmaceutical ventures' management teams impacts VCs' commitment of finance. Specifically, we focus on team members' education in management, law, medicine, biosciences, and chemistry to explain the variance in the amount of money biopharmaceutical ventures acquire in VC financing rounds. Furthermore, our model acknowledges that these impacts might be contingent on the venture's age at the time of the financing round. We test this model with data on 138 financing events covering a total of 1.1 billion $US VC investment. In doing so, we make the following contributions to existing research. First, we expand research on VCs' financial commitments to high technology ventures to include specific human capital components that are important in the context of a particular industry. Focusing on the biopharmaceutical sector, we identify education in management, law, medicine, and biosciences as factors influencing VCs' financial commitments. These findings extend existing work on the role of managers' (general) human capital in explaining VC investment into young ventures (Colombo and Grilli, 2009 and Gimmon and Levie, 2010). Second, the nature of our dependent variable complements existing studies on VC investment in high technology industries. Specifically, the focus of existing research has typically been whether VCs invest in a young venture or not (Deeds et al., 1999, Gompers and Lerner, 2004 and Hall and Hofer, 1993), but this research has rarely investigated the variance in the amount of funding VCs commit to young ventures (Patzelt, 2010). We show that specific human capital of the venture's management team explains how much money VCs commit to young biopharmaceutical firms and, thus, extend existing research. Finally and perhaps most interestingly, we find that even within one industry the influence of human capital on VC investment decisions is not the same for all ventures. Specifically, we find that in our sample this influence changes with the venture's age. This finding acknowledges the complexity of VCs' investment decisions and goes beyond the focus on main-effect relationships which most studies have investigated in the past (Basu et al., 2011, Ferrary, 2009 and Zacharakis and Meyer, 2000). We extend the few studies so far that have taken interactions between VCs' decision cues into account (e.g., Dimov, Shepherd, & Sutcliffe, 2007). The remainder of this article is structured as follows. First, we develop our theory and introduce hypotheses on the link between venture teams' specific human capital and VCs' financial commitments. Subsequently, we describe our data and research method before we present our results. We then discuss those results and how they expand existing work. Finally, we highlight limitations of this study and suggest avenues for future research.