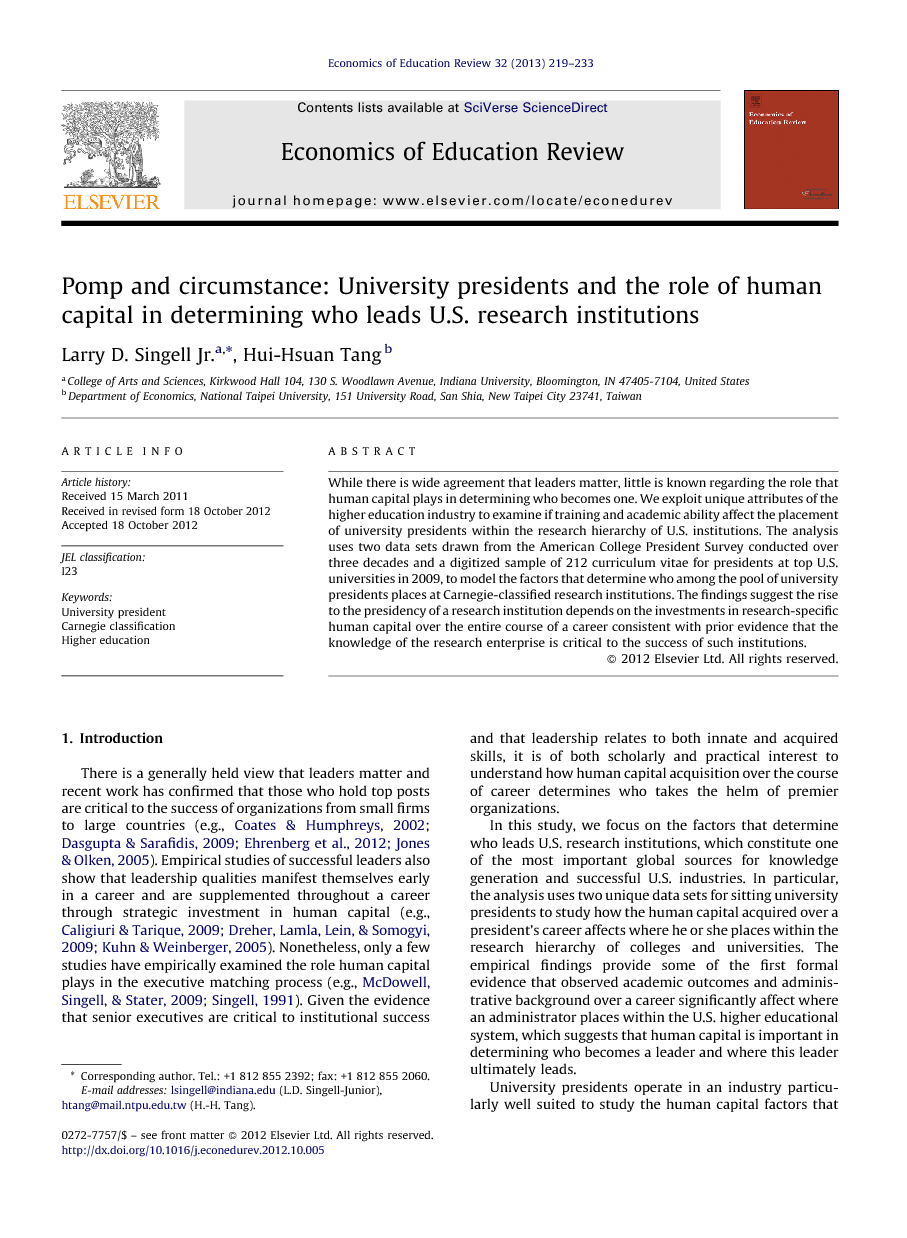 While there is wide agreement that leaders matter, little is known regarding the role that human capital plays in determining who becomes one. We exploit unique attributes of the higher education industry to examine if training and academic ability affect the placement of university presidents within the research hierarchy of U.S. institutions. The analysis uses two data sets drawn from the American College President Survey conducted over three decades and a digitized sample of 212 curriculum vitae for presidents at top U.S. universities in 2009, to model the factors that determine who among the pool of university presidents places at Carnegie-classified research institutions. The findings suggest the rise to the presidency of a research institution depends on the investments in research-specific human capital over the entire course of a career consistent with prior evidence that the knowledge of the research enterprise is critical to the success of such institutions.

There is a generally held view that leaders matter and recent work has confirmed that those who hold top posts are critical to the success of organizations from small firms to large countries (e.g., Coates and Humphreys, 2002, Dasgupta and Sarafidis, 2009, Ehrenberg et al., 2012 and Jones and Olken, 2005). Empirical studies of successful leaders also show that leadership qualities manifest themselves early in a career and are supplemented throughout a career through strategic investment in human capital (e.g., Caligiuri and Tarique, 2009, Dreher et al., 2009 and Kuhn and Weinberger, 2005). Nonetheless, only a few studies have empirically examined the role human capital plays in the executive matching process (e.g., McDowell et al., 2009 and Singell, 1991). Given the evidence that senior executives are critical to institutional success and that leadership relates to both innate and acquired skills, it is of both scholarly and practical interest to understand how human capital acquisition over the course of career determines who takes the helm of premier organizations. In this study, we focus on the factors that determine who leads U.S. research institutions, which constitute one of the most important global sources for knowledge generation and successful U.S. industries. In particular, the analysis uses two unique data sets for sitting university presidents to study how the human capital acquired over a president's career affects where he or she places within the research hierarchy of colleges and universities. The empirical findings provide some of the first formal evidence that observed academic outcomes and administrative background over a career significantly affect where an administrator places within the U.S. higher educational system, which suggests that human capital is important in determining who becomes a leader and where this leader ultimately leads. University presidents operate in an industry particularly well suited to study the human capital factors that determine the ascension into top leadership positions within the profession. First, unlike many industries, the U.S. higher education system has a relatively well-defined and stable hierarchy of institutions that can be ranked by a reliable and easy-to-observe set of research metrics. Our analysis uses a discrete threshold approach that distinguishes between research versus non-research institutions using quantifiable research metrics developed by the Carnegie Foundation. Prior work has shown that other professions, including legal and medical fields, have qualitative hierarchies that, while harder to quantify, parallel those in higher education (e.g., Kolpin & Singell, 1997). Thus, our findings regarding the role of human capital in determining who takes the helm of the best organizations may well extend beyond higher education. Second, unlike most “firms” within a given industry, the internal leadership hierarchy within U.S. higher education is remarkably consistent across most universities such that it is relatively straightforward to compare the career trajectory of university presidents. Specifically, although there may not necessarily be proscribed pathway to the presidency, most schools offer common entry points that include academic oversight positions, such as Department Head, Dean and Provost, and functional oversight positions, such as the Vice Provost (President) of Research and Academic Affairs. While other industries do not have the same hierarchical structures across firms, prior work has demonstrated the importance of hierarchies within organizations such that our findings provide insights into the role they might play in the leadership determination process (e.g., Cornell, 2004 and O’Connell, 2005). Finally, academic jobs provide a relatively unique opportunity to observe and measure ability through documented scholarly and administrative achievements. Specifically, beyond the observation of prior administrative experience, our data permit us to observe specific academic milestones that occur over a career by tracking a president's undergraduate and graduate placements, measured academic research output, and movement into and experience in various administrative posts. Prior work has theoretically demonstrated the role research plays as a university output (e.g., Rothschild & White, 1993) and has empirically demonstrated how an understanding of the research mission is important in executing the managerial function of a university (e.g., Goodall, 2006). Thus, research productivity and a broad understanding of the research enterprise are likely to be critical to leadership ability in knowledge-based industries. The next section provides an overview of the literature on human capital as it pertains to leadership in higher education, which provides the background for a discrete choice model of presidential placement within the research university hierarchy that is developed in Section 3. Section 4 describes the two data sources that are used in Section 5 to estimate a base empirical specification and several extensions that exploit the unique attributes of the two data sources and test the sensitivity of the results to alternative institutional rankings. The final section concludes.

Although there is a generally held view that leaders matter in the success of any institution, relatively little is known empirically about the role human capital plays in determining who ultimately leads an organization. This paper uses two unique data sets for sitting university presidents to study how the human capital acquired over a president's career affects where he or she places within the research hierarchy of colleges and universities. Our empirical findings provide some of the first formal evidence that intellectual and administrative ability demonstrated over the course of a career significantly affects where an administrator places within the U.S. higher educational system, which is arguably one of the most important global sources for knowledge generation and successful U.S. industries. In particular, our findings suggest that research institutions place a relatively heavy emphasis on observed research success throughout a career that begins with where the president attends undergraduate and graduate school, whether the individual held an academic position and was tenured at a research institution, and the quantity of research publications in either article or book format. Demonstrated administrative success is also relatively important for research institutions in terms of holding prior administrative positions as department head, dean, provost, or president at a prior institution. On the other hand, holding administrative positions that are outside of the academic track, such as a vice provost (president) of academic affairs lowers the likelihood of placing as a president of a research institution. Moreover, our findings show that presidents at research institutions tend to have shorter administrative careers even though they come to the presidency at a later age, confirming the descriptive evidence that they spend more time in the professorate. Thus, to rise to the presidency of a research institution requires continual acquisition of human capital associated with research enterprise consistent with prior evidence that such background contributes to the success of the institutions they lead. Overall, the results suggest that the research-oriented universities favor presidents who have demonstrated consistent investments in human capital related to research and are relatively less concerned with years of administrative experience. On the other hand, these institutions are also predicted to hire a significantly lower number of female and non-white presidents in the mid-1980s, whereas interactive time trends indicate that these gender and racial differences not only disappeared but reversed by 2006. Thus, our findings suggest that where presidents’ place within the research hierarchy of institutions may not be solely based on the ability to manage the research enterprise. However, without further information on the factors that determine the pool of presidential candidates, it is difficult to separate discrimination stories from those that depend on potential differences in the pipeline of qualified female and non-white presidential candidates. It follows that further work must be done to examine what factors determine the pool of presidential candidates and who among that pool is ultimately selected to head the institution.