عنوان انگلیسی
On the human capital of Inca Indios before and after the Spanish Conquest. Was there a “Pre-Colonial Legacy”?
دانلود فوری مقاله + سفارش ترجمه 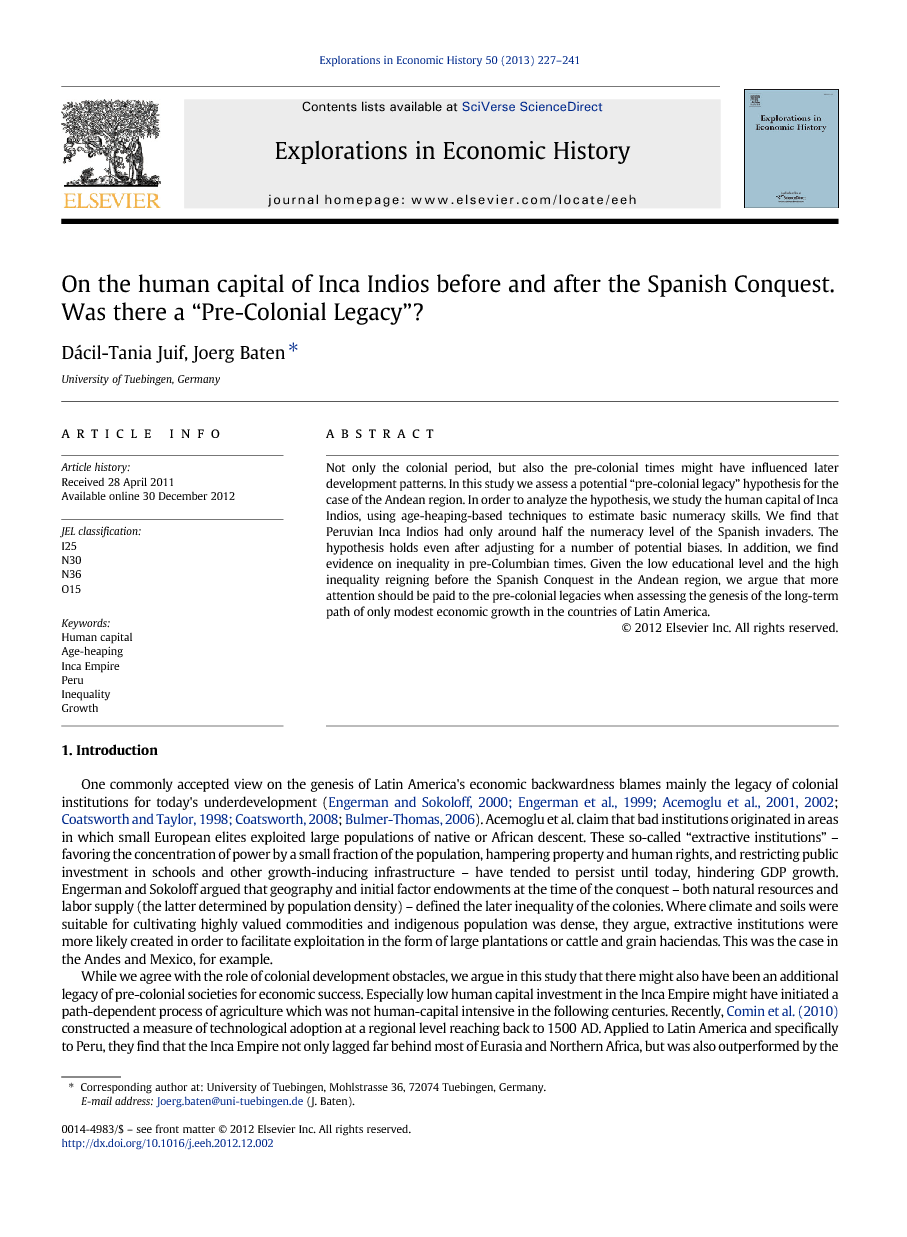 Not only the colonial period, but also the pre-colonial times might have influenced later development patterns. In this study we assess a potential “pre-colonial legacy” hypothesis for the case of the Andean region. In order to analyze the hypothesis, we study the human capital of Inca Indios, using age-heaping-based techniques to estimate basic numeracy skills. We find that Peruvian Inca Indios had only around half the numeracy level of the Spanish invaders. The hypothesis holds even after adjusting for a number of potential biases. In addition, we find evidence on inequality in pre-Columbian times. Given the low educational level and the high inequality reigning before the Spanish Conquest in the Andean region, we argue that more attention should be paid to the pre-colonial legacies when assessing the genesis of the long-term path of only modest economic growth in the countries of Latin America.

One commonly accepted view on the genesis of Latin America's economic backwardness blames mainly the legacy of colonial institutions for today's underdevelopment (Engerman and Sokoloff, 2000, Engerman et al., 1999, Acemoglu et al., 2001 and Acemoglu et al., 2002; Coatsworth and Taylor, 1998 and Coatsworth, 2008; Bulmer-Thomas, 2006). Acemoglu et al. claim that bad institutions originated in areas in which small European elites exploited large populations of native or African descent. These so-called “extractive institutions” – favoring the concentration of power by a small fraction of the population, hampering property and human rights, and restricting public investment in schools and other growth-inducing infrastructure – have tended to persist until today, hindering GDP growth. Engerman and Sokoloff argued that geography and initial factor endowments at the time of the conquest – both natural resources and labor supply (the latter determined by population density) – defined the later inequality of the colonies. Where climate and soils were suitable for cultivating highly valued commodities and indigenous population was dense, they argue, extractive institutions were more likely created in order to facilitate exploitation in the form of large plantations or cattle and grain haciendas. This was the case in the Andes and Mexico, for example. While we agree with the role of colonial development obstacles, we argue in this study that there might also have been an additional legacy of pre-colonial societies for economic success. Especially low human capital investment in the Inca Empire might have initiated a path-dependent process of agriculture which was not human-capital intensive in the following centuries. Recently, Comin et al. (2010) constructed a measure of technological adoption at a regional level reaching back to 1500 AD. Applied to Latin America and specifically to Peru, they find that the Inca Empire not only lagged far behind most of Eurasia and Northern Africa, but was also outperformed by the Aztecs in terms of the utilization of a set of basic technologies (communications, agriculture, military, industry and transportation). Using this measure they report a positive correlation between pre-colonial technology history and per capita income today. Thinking of human capital as a core determinant of economic development, in this paper we contribute to the literature on the genesis of underdevelopment in the Andean region by constructing a data set that permits us to measure pre-colonial educational levels and compare them with European and Asian values. We also argue that educational inequality was substantial in Peru before the Spanish conquest. How can human capital of the “Inca” Indios be measured?1 Obviously, no school enrollment or literacy rates are available for this early period of human history. However, a considerable number of studies have recently used an innovative measure of basic numerical skills, which takes the share of people who report an exact age as an indicator. In historical populations (as well as in the poorest countries today), a substantial share of the people was not able to state their exact age and hence reported a rounded age, such as “I am 40”, when they were in fact e.g. 39 or 41. In hundreds of samples and dozens of studies, it has been proven that there is a significant correlation between the share of exact reported ages and other human capital indicators (see 2 and Appendix A for a longer methodological treatment). For example, one population register on a remote Andean region (Huanuco) contains both age statements of Indios born before the Spanish conquest and thereafter. Another register of Indios in the capital of Peru reflects the birth cohorts of the later 16th century and is therefore an interesting source for the history of numeracy under Spanish colonial rule. We also study a census of the population of Lima born during the 17th century, which allows us to perform a comparison between urban Peruvians of indigenous, European, black and mixed ancestry. Of course, our study faces a number of challenges. Cultural counting differences, selective mortality, and other human capital components apart from numeracy are all potential lacunae of our research design and hence will be discussed in detail below. But before doing so, we will give a brief history and chronology in Section 1, discuss our sources and the methods of basic numeracy measurement in Section 2, and present the main results in Section 3. After the “Potential Objections section” we will dig slightly deeper and assess social and regional differences in Section 5, before ending with a conclusion.

One of the most crucial moments in history was the meeting of Indios of the ancient American cultures and the European invaders of the 15th and 16th centuries. We launched the hypothesis that low educational investments in the pre-colonial Andean region could have influenced later long-term development patterns. We based our argument on the literature about the “colonial legacy” (Acemoglu et al., Engerman and Sokoloff, Coatsworth, Bulmer-Thomas) and argued that also pre-colonial conditions hampered economic growth. Especially, low human capital investment in the Inca Empire might have initiated a path-dependent process of agriculture which was not human-capital intensive in the following centuries. The human capital of the native Inca society was measured with age heaping methods. The sources employed allow us to gain insight into pre-colonial numeracy levels for the first time and to compare them with European values. We discussed adjustments that were necessary for some types of sources, and some characteristics of the sample, performing a joint logistic regression with these adjustment variables, and a large set of country–half century dummy variables. The results of the adjustment variables were interesting by themselves. For example, age statements which come from the five Inquisition sources were characterized by an additional numeracy of 13%, even when controlling for urban bias and religion separately. We estimated the numeracy for Peruvian Inca Indios for the early 16th century, i.e. mainly before the Spanish conquerors arrived. Crucial for this study is the fact that the Peruvian Inca Indios had only about half the numeracy level of the Spanish invaders. This held true even after adjusting for the downward bias which might have been typical for the remote and isolated area of Huanuco on which our early Peruvian data is based. As for the evolution of human capital in the colonial period, our adjusted figures show that Spanish and Portuguese numeracy remained twice as high as in the Latin American regions of the Inca Empire, though Northwest-Europe had even higher numeracy. Finally, our numeracy estimates for the indigenous population remain nearly ten points lower than the White Peruvians'. Our sources and methodology further allowed us to find evidence on inequality in pre-Columbian times. Given the low educational level and the high inequality reigning before the Spanish conquest in the Andean region, we argue that more attention should be paid to the pre-colonial legacies when assessing the genesis of the long-term path of only modest economic growth in the countries of Latin America.