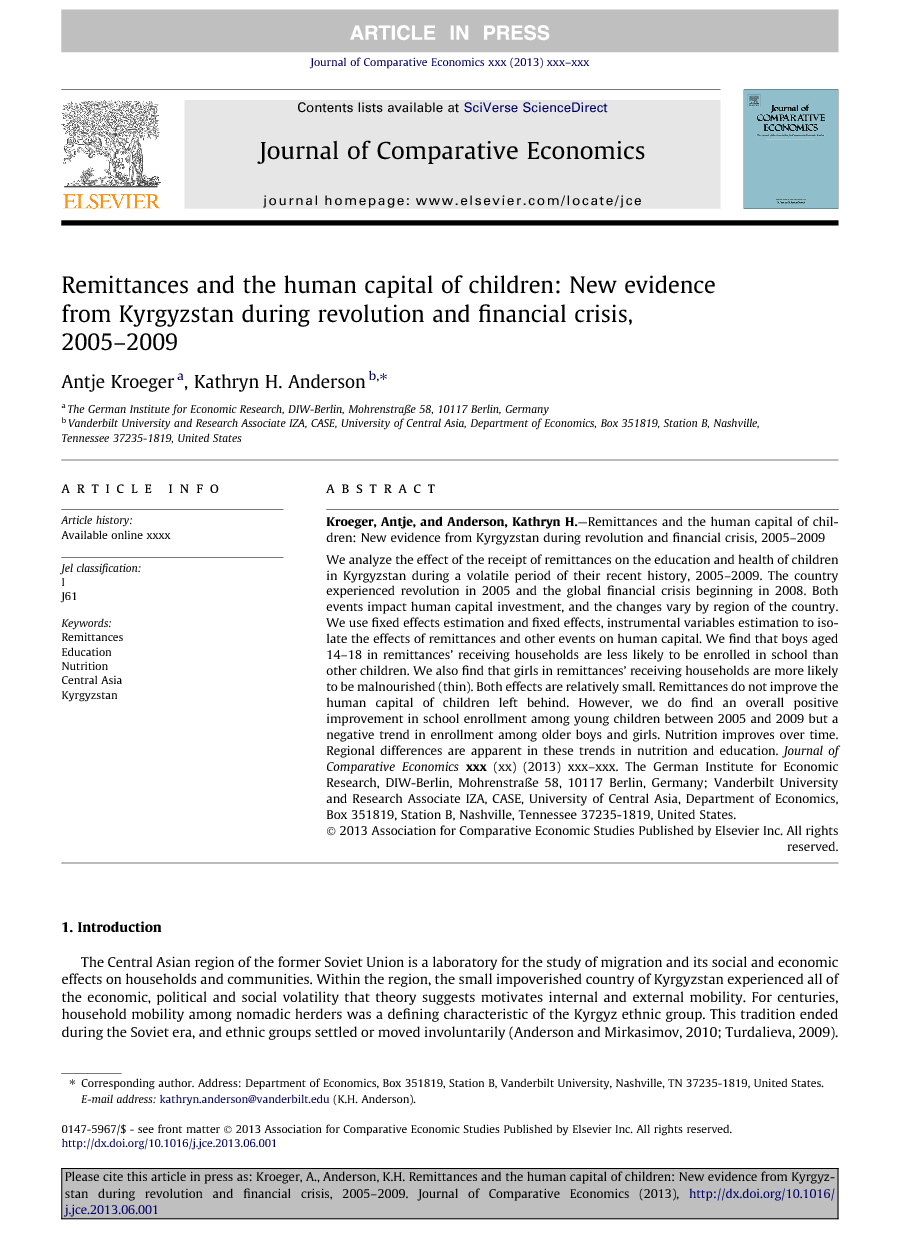 We analyze the effect of the receipt of remittances on the education and health of children in Kyrgyzstan during a volatile period of their recent history, 2005–2009. The country experienced revolution in 2005 and the global financial crisis beginning in 2008. Both events impact human capital investment, and the changes vary by region of the country. We use fixed effects estimation and fixed effects, instrumental variables estimation to isolate the effects of remittances and other events on human capital. We find that boys aged 14–18 in remittances’ receiving households are less likely to be enrolled in school than other children. We also find that girls in remittances’ receiving households are more likely to be malnourished (thin). Both effects are relatively small. Remittances do not improve the human capital of children left behind. However, we do find an overall positive improvement in school enrollment among young children between 2005 and 2009 but a negative trend in enrollment among older boys and girls. Nutrition improves over time. Regional differences are apparent in these trends in nutrition and education.

We examine the role of domestic transfers and international remittances on household decisions to invest in children’s human capital in one country of Central Asia – Kyrgyzstan. Using five waves of the Kyrgyzstan Integrated Household Surveys, we estimate the effect of remittances on children’s education and health outcomes. To our knowledge, this is the first empirical work examining the impact of international remittances on children’s human capital outcomes over time in Central Asia using panel data analysis. Remittances from abroad are widely believed to improve the well-being of recipient households and household members (Calero et al., 2009 and Edwards and Ureta, 2003). However, remittances are usually received by a household with at least one migrant; the loss of adult labor (especially parents) to international migration can have negative effects on the children in the household. We find that education for boys aged 14–18 is negatively affected by remittances’ receipt. Remittances’ receipt is also negatively associated with nutritional outcomes of younger girls who are more likely to be malnourished if they live in a transfer receiving household. Our results can partly be explained by the fact that the absence of a migrant household member especially a parent can exert pressure on remaining household members, mostly children and women, to contribute more of their time to household and market work. Children may also be less supervised when a parent is absent and may feel the need to start working to contribute to the household’s income. Our explanatory remittances variable measures additional income received by the household which is correlated with the absence of at least one family member to migration. Our data do not allow us to identify labor migrants, and remittances proxy for additional income and labor migration in a household.14 Because migration in Kyrgyzstan is male-dominated, boys in particular may be motivated to leave school to start working abroad, where expected wages are higher. Ukueva and Becker (2010) find that transfers are invested in durable goods. This might also be another reason why we do not find a positive relationship between remittances and human capital investment; transfers are first invested in physical not human capital. We cannot test either of these possible explanations for our human capital results with the KIHS data, and we are aware that the problem of identification cannot be fully solved by using FE estimation methods. The examination of channels through which transfers and migration may affect children’s schooling is left for further research with better data. From a policy perspective, our results suggest that children in migrant households may not be better off on average than other children. Policies that support families with migrants can motivate households to invest in children even when labor is in short supply. Assistance in schools and health care centers particularly in the poorer regions of the country would be appropriate to lessen the longer-term, negative effects of emigration on the education and health of children left behind. Human capital investment is required for long run growth in our increasingly technological world. Migration without investment in our children is not a sustainable strategy for economic and social development.