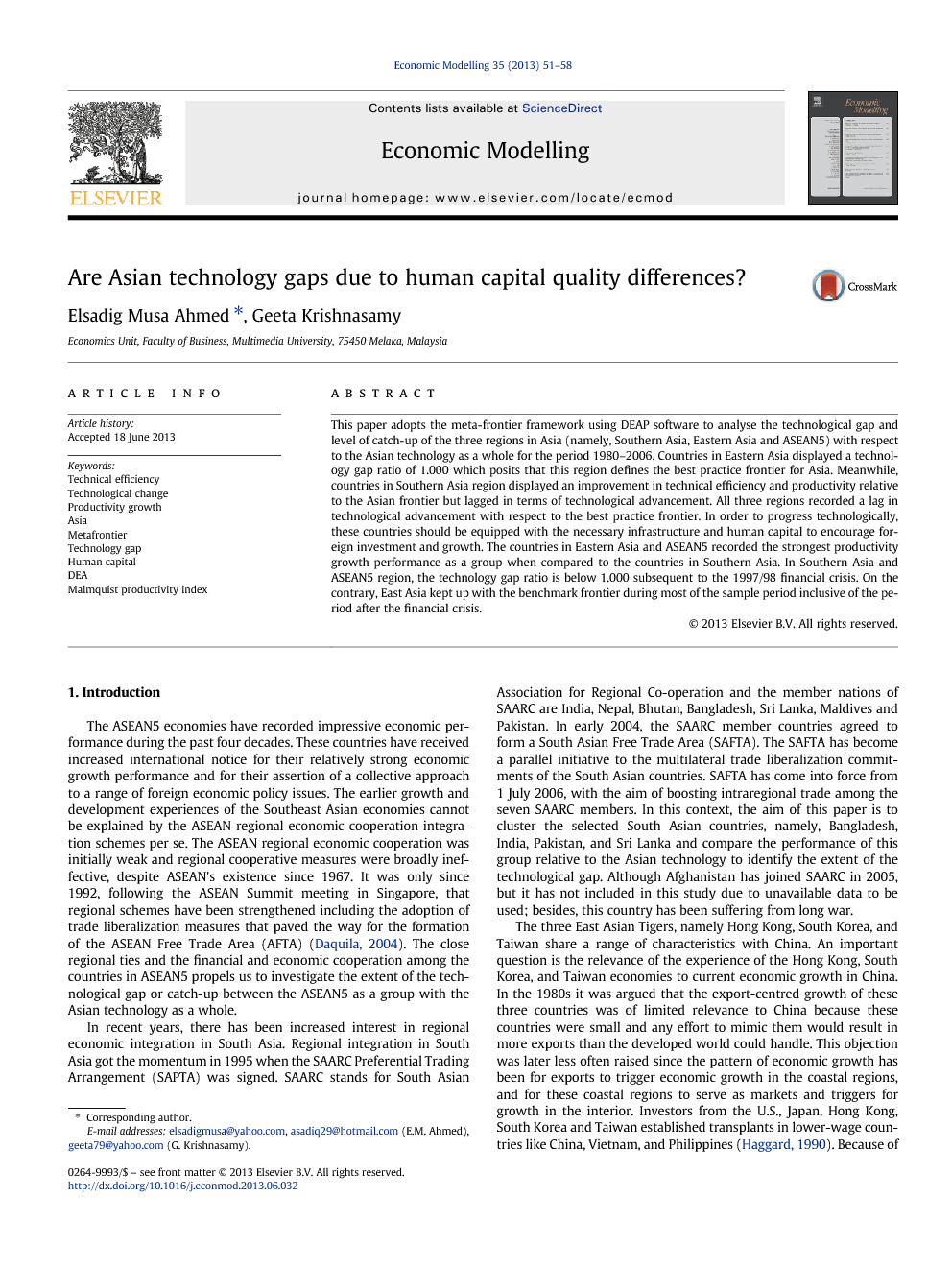 This paper adopts the meta-frontier framework using DEAP software to analyse the technological gap and level of catch-up of the three regions in Asia (namely, Southern Asia, Eastern Asia and ASEAN5) with respect to the Asian technology as a whole for the period 1980–2006. Countries in Eastern Asia displayed a technology gap ratio of 1.000 which posits that this region defines the best practice frontier for Asia. Meanwhile, countries in Southern Asia region displayed an improvement in technical efficiency and productivity relative to the Asian frontier but lagged in terms of technological advancement. All three regions recorded a lag in technological advancement with respect to the best practice frontier. In order to progress technologically, these countries should be equipped with the necessary infrastructure and human capital to encourage foreign investment and growth. The countries in Eastern Asia and ASEAN5 recorded the strongest productivity growth performance as a group when compared to the countries in Southern Asia. In Southern Asia and ASEAN5 region, the technology gap ratio is below 1.000 subsequent to the 1997/98 financial crisis. On the contrary, East Asia kept up with the benchmark frontier during most of the sample period inclusive of the period after the financial crisis.

The ASEAN5 economies have recorded impressive economic performance during the past four decades. These countries have received increased international notice for their relatively strong economic growth performance and for their assertion of a collective approach to a range of foreign economic policy issues. The earlier growth and development experiences of the Southeast Asian economies cannot be explained by the ASEAN regional economic cooperation integration schemes per se. The ASEAN regional economic cooperation was initially weak and regional cooperative measures were broadly ineffective, despite ASEAN's existence since 1967. It was only since 1992, following the ASEAN Summit meeting in Singapore, that regional schemes have been strengthened including the adoption of trade liberalization measures that paved the way for the formation of the ASEAN Free Trade Area (AFTA) (Daquila, 2004). The close regional ties and the financial and economic cooperation among the countries in ASEAN5 propels us to investigate the extent of the technological gap or catch-up between the ASEAN5 as a group with the Asian technology as a whole. In recent years, there has been increased interest in regional economic integration in South Asia. Regional integration in South Asia got the momentum in 1995 when the SAARC Preferential Trading Arrangement (SAPTA) was signed. SAARC stands for South Asian Association for Regional Co-operation and the member nations of SAARC are India, Nepal, Bhutan, Bangladesh, Sri Lanka, Maldives and Pakistan. In early 2004, the SAARC member countries agreed to form a South Asian Free Trade Area (SAFTA). The SAFTA has become a parallel initiative to the multilateral trade liberalization commitments of the South Asian countries. SAFTA has come into force from 1 July 2006, with the aim of boosting intraregional trade among the seven SAARC members. In this context, the aim of this paper is to cluster the selected South Asian countries, namely, Bangladesh, India, Pakistan, and Sri Lanka and compare the performance of this group relative to the Asian technology to identify the extent of the technological gap. Although Afghanistan has joined SAARC in 2005, but it has not included in this study due to unavailable data to be used; besides, this country has been suffering from long war. The three East Asian Tigers, namely Hong Kong, South Korea, and Taiwan share a range of characteristics with China. An important question is the relevance of the experience of the Hong Kong, South Korea, and Taiwan economies to current economic growth in China. In the 1980s it was argued that the export-centred growth of these three countries was of limited relevance to China because these countries were small and any effort to mimic them would result in more exports than the developed world could handle. This objection was later less often raised since the pattern of economic growth has been for exports to trigger economic growth in the coastal regions, and for these coastal regions to serve as markets and triggers for growth in the interior. Investors from the U.S., Japan, Hong Kong, South Korea and Taiwan established transplants in lower-wage countries like China, Vietnam, and Philippines (Haggard, 1990). Because of their geographical proximity, China is grouped with the three East Asian Tigers to evaluate the extent of their catch-up or lagging with respect to the Asian technology as a whole. All previous studies derived their decompositions under the assumption that all the countries in Asia operated under a common technology. This paper extends previous study by considering groups of countries in Asia which operate under different technologies thus relaxing the common technology assumption, as well as explicitly accounting for temporal effects, which measures productivity and efficiency changes over the period 1980–2006. In most empirical applications of the metafrontier, grouping of countries is implicit in the problem under consideration. There are no a priori theoretical prescriptions on how countries should be allocated to regions or groups when estimating frontiers. The groupings of countries must largely depend upon the purpose of the empirical analysis being conducted. O'Donnell et al. (2005) grouped countries by geographical regions, while Iyer et al. (2006) grouped countries by income levels. The disadvantage of income based groupings is that the income level changes over time and by leaving the grouping fixed overtime might bias the shape of the group frontiers and this influence the computed productivity measures. Therefore, in this present study, we have grouped the countries according to geographical regions to analyse the technological gap between each of the regional frontiers within Asia relative to the Asian frontier as a whole. We assume that countries that are in the same region share the same technology.