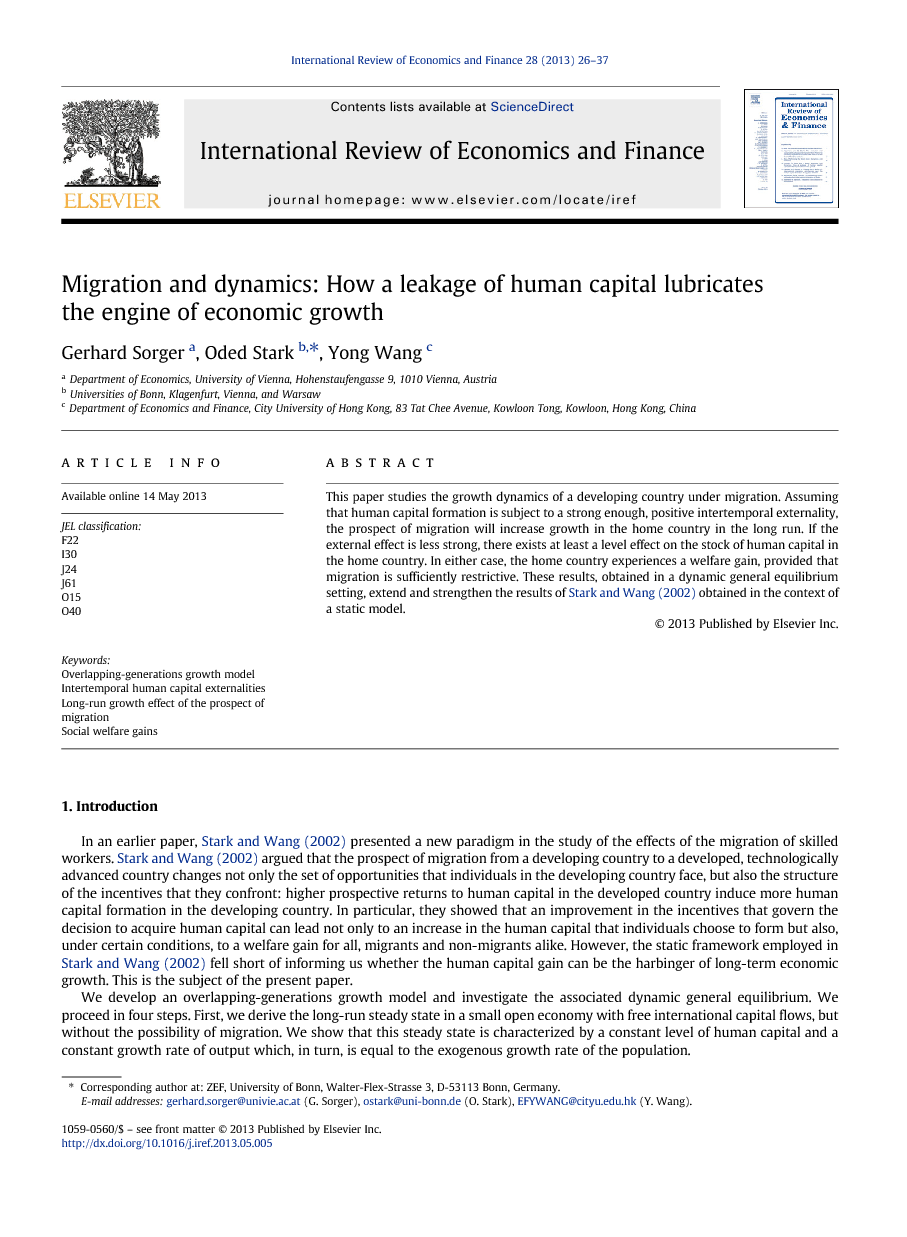 This paper studies the growth dynamics of a developing country under migration. Assuming that human capital formation is subject to a strong enough, positive intertemporal externality, the prospect of migration will increase growth in the home country in the long run. If the external effect is less strong, there exists at least a level effect on the stock of human capital in the home country. In either case, the home country experiences a welfare gain, provided that migration is sufficiently restrictive. These results, obtained in a dynamic general equilibrium setting, extend and strengthen the results of Stark and Wang (2002) obtained in the context of a static model.

In an earlier paper, Stark and Wang (2002) presented a new paradigm in the study of the effects of the migration of skilled workers. Stark and Wang (2002) argued that the prospect of migration from a developing country to a developed, technologically advanced country changes not only the set of opportunities that individuals in the developing country face, but also the structure of the incentives that they confront: higher prospective returns to human capital in the developed country induce more human capital formation in the developing country. In particular, they showed that an improvement in the incentives that govern the decision to acquire human capital can lead not only to an increase in the human capital that individuals choose to form but also, under certain conditions, to a welfare gain for all, migrants and non-migrants alike. However, the static framework employed in Stark and Wang (2002) fell short of informing us whether the human capital gain can be the harbinger of long-term economic growth. This is the subject of the present paper. We develop an overlapping-generations growth model and investigate the associated dynamic general equilibrium. We proceed in four steps. First, we derive the long-run steady state in a small open economy with free international capital flows, but without the possibility of migration. We show that this steady state is characterized by a constant level of human capital and a constant growth rate of output which, in turn, is equal to the exogenous growth rate of the population. Second, we study growth dynamics when the individuals in the home country face a strictly positive probability of migrating to a destination country where the returns to their human capital are higher than at home. The higher expected wage rate yielded by the prospect of migration induces the individuals to acquire more human capital. In our model, human capital formation is subject to a positive intertemporal externality beyond some threshold level. We show that the size of the spillover effect of the current human capital on future productivity plays an important role in determining the long-run growth effect of the prospect of migration. When the spillover effect is sufficiently strong, the prospect of migration results in a higher growth rate of the home country in the long run; however, a weak enough, or a complete absence of, a spillover effect will lead to only a level increase in human capital, with a reduction of the growth rate in the long run.1 Third, we conduct a welfare analysis, looking at the wellbeing of the individuals who stay behind in the home country. When the workforce is homogeneous, these individuals too have responded (ex ante) to the migration-conferred incentive to acquire more human capital, yet ended up (ex post) not subjecting their improved human capital to the higher pay environment abroad. Provided that migration is restricted, the long-run growth gain translates into a welfare gain. Moreover, even if there is no long-run growth gain, a welfare gain is still possible under restrictive migration policies, just as originally demonstrated in Stark and Wang (2002) in the context of a static model. Finally, in step four we demonstrate that our findings are robust to the introduction of heterogeneity of skill levels. Specifically, we assume that individuals may differ in their ability to form human capital, and that only the highly skilled individuals, who in equilibrium acquire more human capital than the low-skill individuals, face a prospect of migration. Despite the negative effect caused by the migration of such individuals, a growth gain as well as a resulting welfare gain in the home country can still materialize.