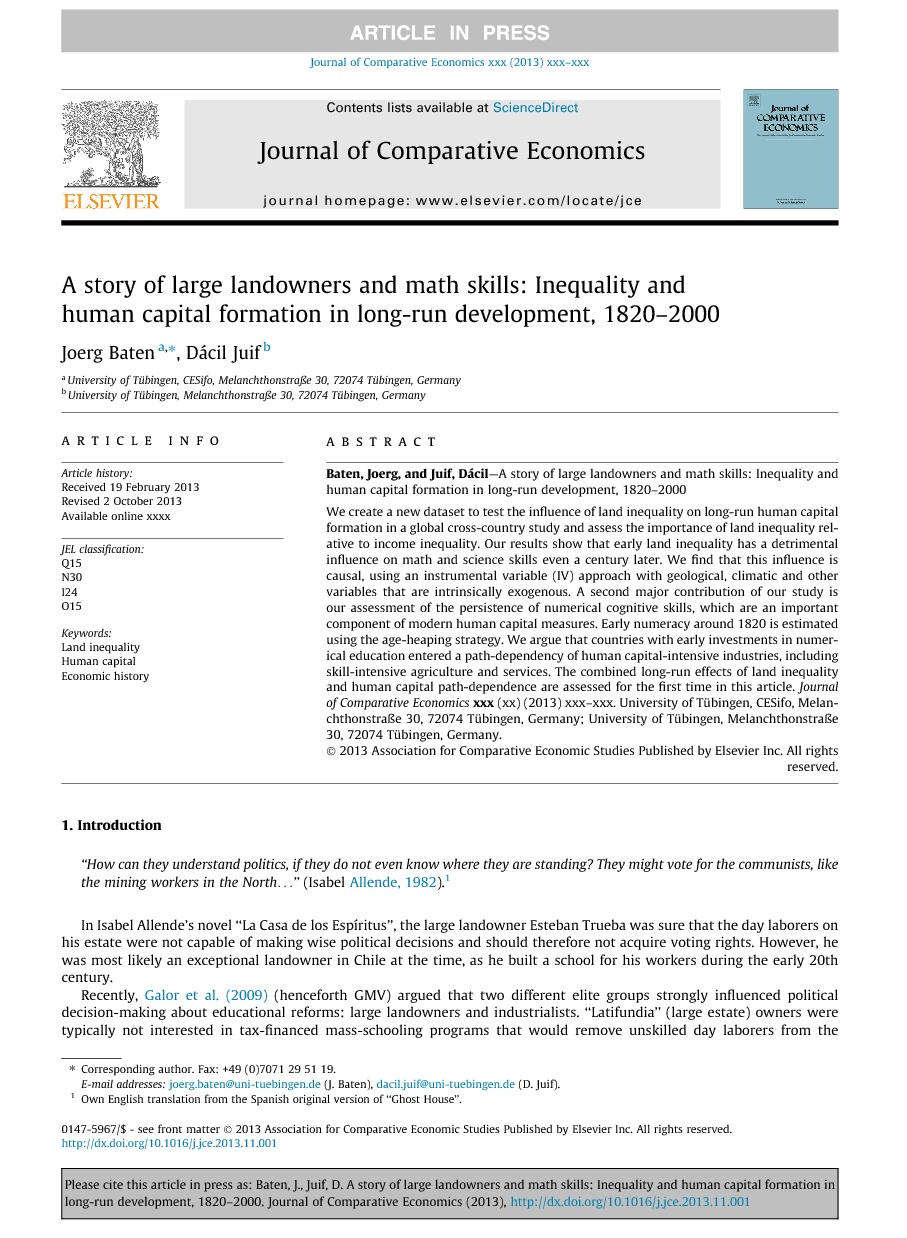 We create a new dataset to test the influence of land inequality on long-run human capital formation in a global cross-country study and assess the importance of land inequality relative to income inequality. Our results show that early land inequality has a detrimental influence on math and science skills even a century later. We find that this influence is causal, using an instrumental variable (IV) approach with geological, climatic and other variables that are intrinsically exogenous. A second major contribution of our study is our assessment of the persistence of numerical cognitive skills, which are an important component of modern human capital measures. Early numeracy around 1820 is estimated using the age-heaping strategy. We argue that countries with early investments in numerical education entered a path-dependency of human capital-intensive industries, including skill-intensive agriculture and services. The combined long-run effects of land inequality and human capital path-dependence are assessed for the first time in this article.

“How can they understand politics, if they do not even know where they are standing? They might vote for the communists, like the mining workers in the North…” (Isabel Allende, 1982). 1 In Isabel Allende’s novel “La Casa de los Espíritus”, the large landowner Esteban Trueba was sure that the day laborers on his estate were not capable of making wise political decisions and should therefore not acquire voting rights. However, he was most likely an exceptional landowner in Chile at the time, as he built a school for his workers during the early 20th century. Recently, Galor et al. (2009) (henceforth GMV) argued that two different elite groups strongly influenced political decision-making about educational reforms: large landowners and industrialists. “Latifundia” (large estate) owners were typically not interested in tax-financed mass-schooling programs that would remove unskilled day laborers from the agricultural workforce on their estates or make them rebellious. Industrial capitalists, in contrast, typically favored a workforce that had at least some basic skills. In countries that displayed a large amount of land inequality, such as some Latin American countries, the elite landowner group gained political power because their large estates provided financial and social backing to influence the ruling groups. In the process of industrialization, countries with a more equal distribution of land overtook countries with high inequality and performed better in terms of modern income growth. According to Wegenast, 2009 and Wegenast, 2010, plantation owners also had political reasons to neglect educational expansion, for instance, by monopolizing the decision-making process for literacy requirements for suffrage. GMV provided some evidence regarding regional land inequality and school investment in the U.S. from 1880–1940 as well as some qualitative evidence on land reforms in East Asia and Russia. Hippe and Baten (2012) recently tested and confirmed the link between land inequality and human capital development for European regions. However, the implications of these theories have not been tested for a large cross-section of countries over the long run, partly because evidence of early inequality for poorer countries was scarce. We create a new dataset to test the influence of land inequality on long-run human capital formation. The methodological idea is to (1) use evidence of 20th century land inequality, (2) assess the influence of land reforms and (3) estimate late 19th century land inequality on the basis of backward projection. In this study, we assess the influence of both within-country land and income inequality on human capital formation for the period from 1964 to 2003. As a measure of income inequality, we use a recently created global dataset by Baten et al. (2012) and Blum and Baten (2011). This dataset documents within-country income inequality, employing anthropometric inequality measures as well as income distribution (and GDP per capita divided by wages of unskilled workers, so-called “Williamson Ginis”, and other indicators). Which measure of human capital should be employed as a dependent variable? We argue that a measure should be used that is most conducive to economic growth. For example, school years have often been criticized because the productivity of a school hour differs between countries and cultures and, thus, is not a perfect growth predictor. Recently, the leading human capital economists Hanushek and Woessmann, 2012a and Hanushek and Woessmann, 2012b argued that cognitive skill test results related to math and science abilities are the strongest correlates of economic growth. They extended the famous PISA results from the 2000s into the period 1964–2003 by recalibrating a large number of international math and science tests; they also developed a comprehensive index of those core skills that will be our dependent variable. A second major contribution of our study is our assessment of the long-run persistence of numerical cognitive skills, which are an important component of the Hanushek–Woessmann measure. We include a new measure of numeracy around 1820 that is constructed on the basis of age-heaping estimates. We argue that countries with early investments in numerical education (and perhaps cultures that promoted numerical skills) entered a path-dependency of human capital-intensive industries, including skill-intensive agriculture and services. Those countries that took the numerical lead (but not necessarily the lead in living standards) in the 1820s were situated in Scandinavia, Central and Western Europe, and East Asia. In the second wave, North American, Southern and East-Central European countries followed. Other world regions lagged behind. The next section provides a literature overview on the determinants of human capital formation, such as institutional quality, geography, fertility choice and physical capital. In Section 3, we introduce the data and sources. Sections 4 and 5 describe the OLS and instrumental variable test regression results of our empirical study. Section 6 concludes.

The combined long-run effects of land inequality and human capital path-dependence were assessed in this article for the first time. We found that initial income inequality in a cross-section of countries might play a major role in determining the development of human capital formation in the long run on the first view. However, a more important predictor of recent human capital formation was early land concentration. This finding supports the GMV (2009) theory that the behavior of landowners is crucial to development relative to the influence of industrialists. The industrialist component of the model was to some extent proxied by early numeracy because the top performers in early numeracy were also quite industrial. We tested the robustness of our results by including various control variables and running a series of alternative regression models. We find that this influence is actually causal, using an Instrumental Variable (IV) approach with geological, climatic and other variables that are intrinsically exogenous. These results are consistent with Easterly’s (2007) argument that land inequality is an important component of “structural inequality” because income inequality can temporarily rise, especially in growth and transformation processes. Structural inequality is mostly caused by the long-run effects of colonial land grabbing. Structural inequality has a much more depressing effect on human capital and development because it seems that educational efforts might not be rewarded in a situation of permanent, structural inequality. A second major contribution of our study was to assess the persistence of numerical cognitive skills, which are an important component of the Hanushek-Woessmann measurement. Our results confirm that countries with early investments in numerical education (and perhaps cultures that promote numerical skills) entered a path-dependency of human capital-intensive industries, including skill-intensive agriculture and industries. Early numeracy explained a considerable portion of recent cognitive skills.