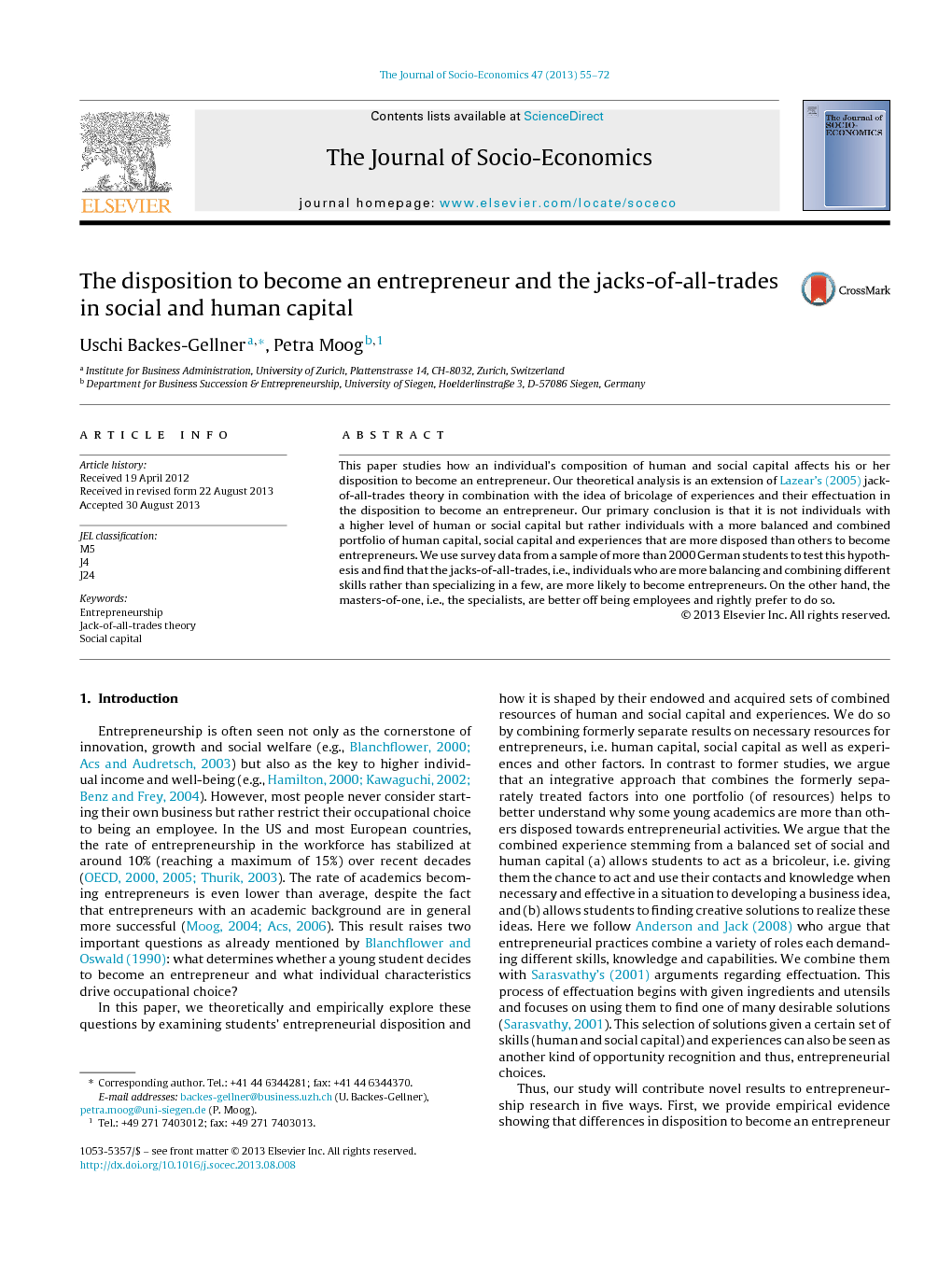 This paper studies how an individual's composition of human and social capital affects his or her disposition to become an entrepreneur. Our theoretical analysis is an extension of Lazear's (2005) jack-of-all-trades theory in combination with the idea of bricolage of experiences and their effectuation in the disposition to become an entrepreneur. Our primary conclusion is that it is not individuals with a higher level of human or social capital but rather individuals with a more balanced and combined portfolio of human capital, social capital and experiences that are more disposed than others to become entrepreneurs. We use survey data from a sample of more than 2000 German students to test this hypothesis and find that the jacks-of-all-trades, i.e., individuals who are more balancing and combining different skills rather than specializing in a few, are more likely to become entrepreneurs. On the other hand, the masters-of-one, i.e., the specialists, are better off being employees and rightly prefer to do so.

Entrepreneurship is often seen not only as the cornerstone of innovation, growth and social welfare (e.g., Blanchflower, 2000 and Acs and Audretsch, 2003) but also as the key to higher individual income and well-being (e.g., Hamilton, 2000, Kawaguchi, 2002 and Benz and Frey, 2004). However, most people never consider starting their own business but rather restrict their occupational choice to being an employee. In the US and most European countries, the rate of entrepreneurship in the workforce has stabilized at around 10% (reaching a maximum of 15%) over recent decades (OECD, 2000, OECD, 2005 and Thurik, 2003). The rate of academics becoming entrepreneurs is even lower than average, despite the fact that entrepreneurs with an academic background are in general more successful (Moog, 2004 and Acs, 2006). This result raises two important questions as already mentioned by Blanchflower and Oswald (1990): what determines whether a young student decides to become an entrepreneur and what individual characteristics drive occupational choice? In this paper, we theoretically and empirically explore these questions by examining students’ entrepreneurial disposition and how it is shaped by their endowed and acquired sets of combined resources of human and social capital and experiences. We do so by combining formerly separate results on necessary resources for entrepreneurs, i.e. human capital, social capital as well as experiences and other factors. In contrast to former studies, we argue that an integrative approach that combines the formerly separately treated factors into one portfolio (of resources) helps to better understand why some young academics are more than others disposed towards entrepreneurial activities. We argue that the combined experience stemming from a balanced set of social and human capital (a) allows students to act as a bricoleur, i.e. giving them the chance to act and use their contacts and knowledge when necessary and effective in a situation to developing a business idea, and (b) allows students to finding creative solutions to realize these ideas. Here we follow Anderson and Jack (2008) who argue that entrepreneurial practices combine a variety of roles each demanding different skills, knowledge and capabilities. We combine them with Sarasvathy's (2001) arguments regarding effectuation. This process of effectuation begins with given ingredients and utensils and focuses on using them to find one of many desirable solutions (Sarasvathy, 2001). This selection of solutions given a certain set of skills (human and social capital) and experiences can also be seen as another kind of opportunity recognition and thus, entrepreneurial choices. Thus, our study will contribute novel results to entrepreneurship research in five ways. First, we provide empirical evidence showing that differences in disposition to become an entrepreneur depend on differences in portfolios of human capital; thereby we also present another test of Lazear's jack-of-all-trades theory. Second, we extend Lazear's idea and look not only at the portfolio of human capital (traditional skills as measured by education and job experience) but also at the portfolio of social capital in order to explain the disposition to become entrepreneur (Davidsson and Honig, 2003 and Florin et al., 2003). Social capital is another resource that—like in Lazear's model any type of human capital—has to be balanced for individuals if they may want to become entrepreneurs—because becoming an entrepreneur at many points is a social process leading to networks and people to work with (Hartog et al., 2008). Third, we use advanced proxies to measure the balancing of a portfolio (of human and/or social capital) in an innovative way, i.e. we introduce new operationalizations for combined skill variables. With z-transformations for different types of human and social capital variables, we obtain a more accurate measure of the balancing effect in a portfolio and thereby of its effect on entrepreneurship disposition. Fourth, following effectuation theory, we explain the effects by arguing that entrepreneurs face dynamic situations, where both, human and social capital are important resources that always have to be kept in balance. Fifth, using a sample of more than 2000 German university students, we are able to show that it is indeed the balancing and combination of skills and not so much the level of skills or the level of social capital that matters. A balanced human capital portfolio is not sufficient to foster entrepreneurship if it is not complemented by a portfolio of social capital and vice versa. The outline of the paper is as follows. First, we present our theoretical explanation and derive hypotheses on the intention to become an entrepreneur. Second, we describe the data set, which consists of detailed information of approximately 2000 students, and we introduce the empirical estimation method and variables we will use. Third, we present our findings and finally discuss our results and limitations of our study and conclude.