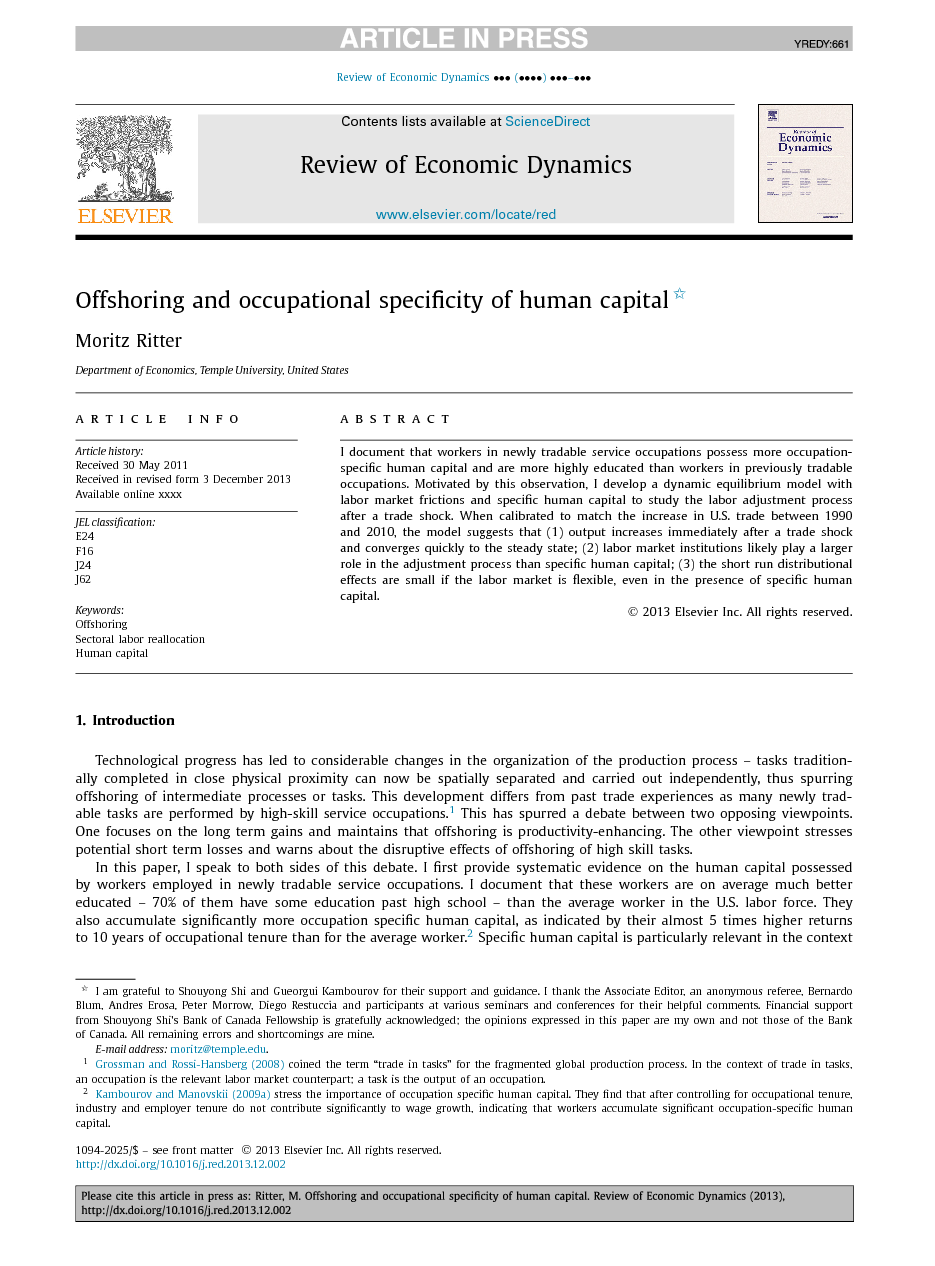 Technological progress has led to considerable changes in the organization of the production process – tasks traditionally completed in close physical proximity can now be spatially separated and carried out independently, thus spurring offshoring of intermediate processes or tasks. This development differs from past trade experiences as many newly tradable tasks are performed by high-skill service occupations.1 This has spurred a debate between two opposing viewpoints. One focuses on the long term gains and maintains that offshoring is productivity-enhancing. The other viewpoint stresses potential short term losses and warns about the disruptive effects of offshoring of high skill tasks. In this paper, I speak to both sides of this debate. I first provide systematic evidence on the human capital possessed by workers employed in newly tradable service occupations. I document that these workers are on average much better educated – 70% of them have some education past high school – than the average worker in the U.S. labor force. They also accumulate significantly more occupation specific human capital, as indicated by their almost 5 times higher returns to 10 years of occupational tenure than for the average worker.2 Specific human capital is particularly relevant in the context of worker reallocation due to high-skill offshoring: were reallocated workersʼ human capital mostly general, their loss in productivity would likely be small, as workers would be able to apply most of their knowledge to new tasks. However, if workers who are exposed to increased offshoring have relatively more occupation specific human capital, they will be less willing to switch occupations since occupational switches bring about the destruction of these specific skills. Motivated by this observation, I build on work by Kambourov (2009) and develop a small open economy model in which workers acquire human capital specific to the tasks they complete.3 Worker reallocation after a trade shock is not only costly because of the loss of any specific human capital, but also because of the risk of unemployment and the time it takes to find a suitable new line of work. To capture these costs, the model features search frictions and a match-specific productivity shock. This structure allows the model to quantify the aggregate gains from trade, as well as the distributional effects from a trade shock. Specific human capital generates short run distributional effects which differ from the long run effects; the labor market frictions and the idiosyncratic productivity draw generate increased unemployment and job-shopping along the transition path. After calibrating the model to match occupational turnover and the returns to occupational tenure observed in the U.S., I use the model to assess the labor market implications of the surge in trade in goods and services observed between 1990 and 2010. The dynamic nature of the model allows me to quantify not only the short run impact, but also the entire transition to the new steady state. The most important finding is that, even if the full magnitude of the trade shock is introduced at once (instead of the more staggered fashion observed in the data), the labor market impact of this “tradability revolution” is small. Almost 60% of the output gains are realized within one year and 90% of the transition is concluded four to five years after the shock. As a result of this fast transition, the distributional effects are small as well: almost all workers see the net present value of their earnings increase immediately, only highly skilled workers in production occupations see the value of their future earnings fall by about 0.9%. In the long run, the competitive nature of the labor market leads to an equalization of expected earnings across all occupations.4 To further investigate the relative importance of specific human capital and labor market institutions, I conduct three counterfactual experiments. First, I introduce the increase in trade in goods and the increase in trade in services separately. Second, I simulate the response to the trade shock in an otherwise identical economy without specific human capital. Last, I increase the labor market frictions and decrease worker turnover relative to the baseline economy. Taken together, these experiments suggest that, in the case of the U.S., the flexible labor market plays a bigger role in the adjustment process than does the specific human capital of workers in high skill service occupations. With flexible labor markets, worker reallocation is fast. This dampens the adverse effects on the workers who stay in their occupations – typically the workers with the highest level of specific skills. The relatively small role of specific human capital can be explained by two facts: first, while workers in tradable service occupations have relatively high specific human capital, its loss is still small compared to the output loss associated with unemployment. Second, even in offshored service occupations, many workers have not yet acquired the narrow specific human capital that would be lost upon an occupation switch. In the model, as in the data, only about 40% of all workers spent enough time in an occupation to have acquired the highest level of specific human capital. The model predicts that these workers remain in their occupation and retain their specific skills. In other words, the average specific human capital of switchers is lower than that of stayers.