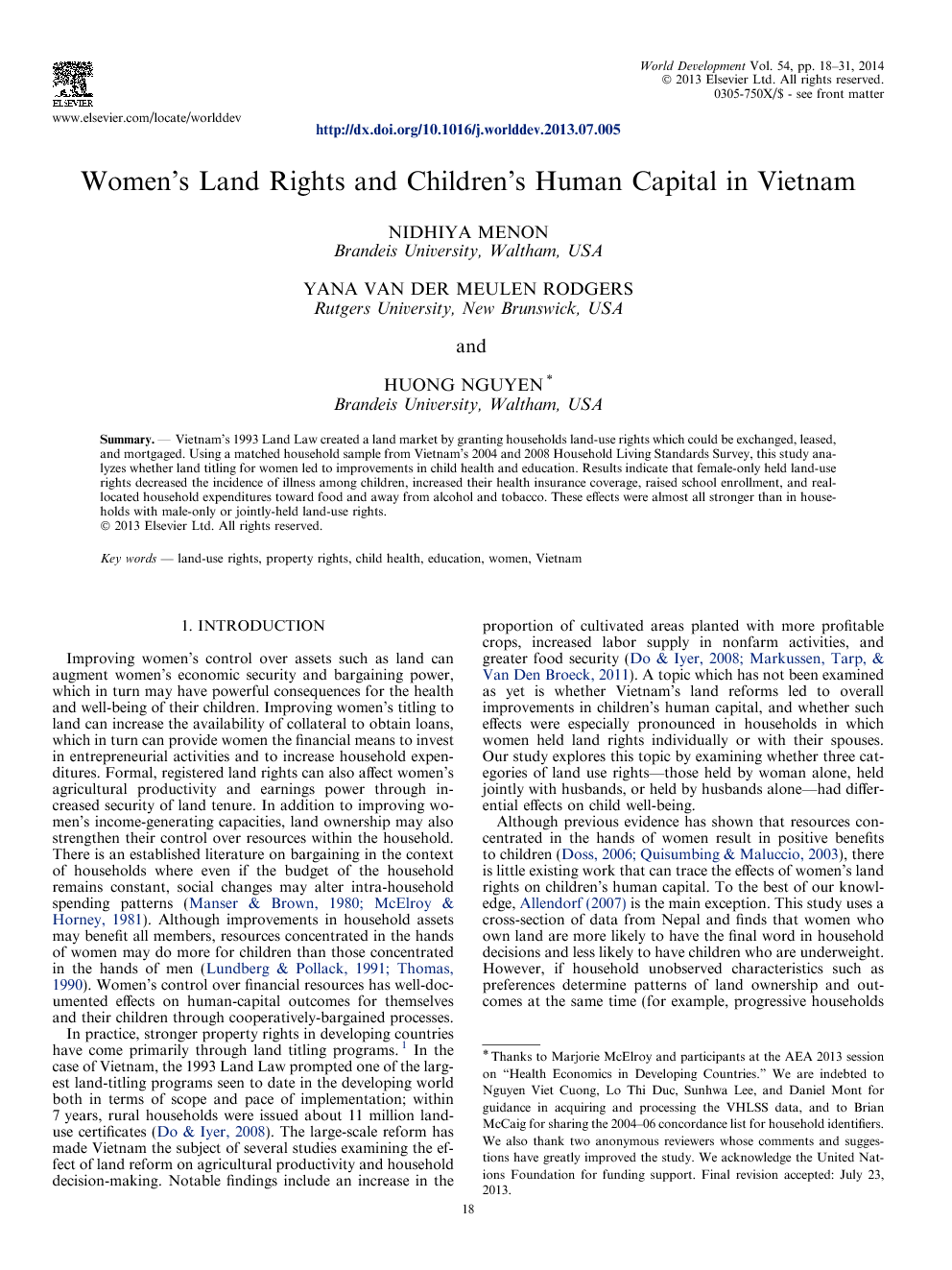 Vietnam’s 1993 Land Law created a land market by granting households land-use rights which could be exchanged, leased, and mortgaged. Using a matched household sample from Vietnam’s 2004 and 2008 Household Living Standards Survey, this study analyzes whether land titling for women led to improvements in child health and education. Results indicate that female-only held land-use rights decreased the incidence of illness among children, increased their health insurance coverage, raised school enrollment, and reallocated household expenditures toward food and away from alcohol and tobacco. These effects were almost all stronger than in households with male-only or jointly-held land-use rights.

Improving women’s control over assets such as land can augment women’s economic security and bargaining power, which in turn may have powerful consequences for the health and well-being of their children. Improving women’s titling to land can increase the availability of collateral to obtain loans, which in turn can provide women the financial means to invest in entrepreneurial activities and to increase household expenditures. Formal, registered land rights can also affect women’s agricultural productivity and earnings power through increased security of land tenure. In addition to improving women’s income-generating capacities, land ownership may also strengthen their control over resources within the household. There is an established literature on bargaining in the context of households where even if the budget of the household remains constant, social changes may alter intra-household spending patterns (Manser and Brown, 1980 and McElroy and Horney, 1981). Although improvements in household assets may benefit all members, resources concentrated in the hands of women may do more for children than those concentrated in the hands of men (Lundberg and Pollack, 1991 and Thomas, 1990). Women’s control over financial resources has well-documented effects on human-capital outcomes for themselves and their children through cooperatively-bargained processes. In practice, stronger property rights in developing countries have come primarily through land titling programs.1 In the case of Vietnam, the 1993 Land Law prompted one of the largest land-titling programs seen to date in the developing world both in terms of scope and pace of implementation; within 7 years, rural households were issued about 11 million land-use certificates (Do & Iyer, 2008). The large-scale reform has made Vietnam the subject of several studies examining the effect of land reform on agricultural productivity and household decision-making. Notable findings include an increase in the proportion of cultivated areas planted with more profitable crops, increased labor supply in nonfarm activities, and greater food security (Do and Iyer, 2008 and Markussen et al., 2011). A topic which has not been examined as yet is whether Vietnam’s land reforms led to overall improvements in children’s human capital, and whether such effects were especially pronounced in households in which women held land rights individually or with their spouses. Our study explores this topic by examining whether three categories of land use rights—those held by woman alone, held jointly with husbands, or held by husbands alone—had differential effects on child well-being. Although previous evidence has shown that resources concentrated in the hands of women result in positive benefits to children (Doss, 2006 and Quisumbing and Maluccio, 2003), there is little existing work that can trace the effects of women’s land rights on children’s human capital. To the best of our knowledge, Allendorf (2007) is the main exception. This study uses a cross-section of data from Nepal and finds that women who own land are more likely to have the final word in household decisions and less likely to have children who are underweight. However, if household unobserved characteristics such as preferences determine patterns of land ownership and outcomes at the same time (for example, progressive households may have more land registered in women’s names and may also have better health outcomes for children), a single cross-section of data does not facilitate estimation of causal impacts. This study uses data on matched households from the 2004 and 2008 Vietnam Household Living Standards Surveys (VHLSS) in which land-use rights are identified with specific stake-holders within the home. The data allow us to control for household-level differences and to directly ascertain the gender-differentiated impact of the titling program on child health and education. Although it is possible that the person in whose name the land is registered differs from the person making actual decisions on how to manage the land, our methods and data improve on other studies in that we can determine the relative impact of different categories of land-use registration by gender on measures of children’s human capital. Results indicate that after controlling for observed and unobserved household-level characteristics, an increased proportion of land registered in women’s names only generates substantial health and educational benefits for their children.

The study has provided new evidence on the relationship between land titling and child health and education in Vietnam and to the best of our knowledge, is among the first studies to analyze the effects of gender-segregated land rights on measures of children’s human capital in a developing country. Evaluating the economic benefits of women’s holdings of land-use rights is particularly important given the emphasis in scholarly and policy discourse on the many benefits of concentrating resources in the hands of women. The analysis has an additional rationale from the heavy weight the government of Vietnam has placed on meeting the needs of vulnerable members of the population like children, and reducing poverty. Estimates indicate that female-only held land-use rights decreased the incidence of children’s illnesses, raised school enrollment, and reallocated household expenditures away from alcohol and tobacco. These effects were almost all larger in magnitude than those of male-only held land-use rights. In general, these results provide support for strengthening and promoting procedures to encourage women’s titling to land. Somewhat surprisingly, despite the emphasis of the 2001 policy reforms to increase joint titling, we found that in most cases jointly-held LUCs did not have a statistically significant impact on measures of child health and spending or on household expenditures and where they did, the impacts were essentially equivalent to male-only held LUCs. This finding highlights a limitation of our study in that we have information on whose names are inscribed on the land titles rather than who actually controls the land, and land rights do not imply jurisdiction over land. Further, given the nuanced connotation of headship and household structure in Vietnam, our analysis is cognizant of the association between household headship, land-use rights, and household structure. We have tried, to the best of our ability, to interpret our results within this context, and to “back-out” plausible causal mechanisms based on increases in bargaining power vs. income to explain them. Other studies with access to better survey data may be more successful in directly measuring the mechanisms that underlie such patterns. Our findings are consistent with the conclusion in Razavi (2003) that the relative advantages of joint vs. individual titling are not straightforward. Women can potentially enjoy greater flexibility in managing their farm output, bequeathing land, and claiming land in the case of divorce, if they hold land rights individually as compared to jointly. However, individually-held land titles may not help women if their land holdings are very small and resource constraints prevent them from investing in capital equipment. Jointly-held land titles could help alleviate resource constraints, diversify risk and provide greater access to investible funds, but these potential benefits hinge on household dynamics in which women have bargaining power and a voice in the distribution of resources. The successful implementation of joint-titling policies is also complicated by trust and commitment issues between husbands and wives, in that a woman’s insistence on having her name placed on a joint title could be seen as a signal that she distrusts her husband ( Jackson, 2003). Our finding that individually-held land rights for women yielded more beneficial effects than jointly-held rights suggests that the continuation of patriarchal divisions of power within Vietnamese households may have limited the extent to which joint-titling policy reforms translated into tangible, measurable benefits over and above land titling for (mostly male) household heads. Closely related, the importance of individually-held land rights for women in improving health and schooling outcomes for children suggests that land titling acted more to increase women’s income-generating capacity than it did to strengthen their bargaining power in couple-led households with jointly-held land titles. Since access does not ensure ownership or actual rights to the land, a lesson from the Vietnam land reform is that rights need to be guaranteed in such a way that women can exchange, lease, bequeath, sell, or mortgage their land in an enforceable manner. Policy recommendations for Vietnam and other countries with similar land titling initiatives center on improvements in the administration and management of land law reforms, especially when implementation results in gender disparities in the issuance of land titles. Such improvements include an increase in administrative capacity at the local level to manage land-title applications and approvals, greater dissemination of information to households about the process through which they acquire land titles, an increase in women’s legal retirement age to 60 (the same as men), and stronger efforts to ensure gender equity in the distribution of certificates. However, as this study has demonstrated, simply issuing land-use rights alone may not be sufficient to guarantee improvements for women and their children. Reforms also need to encompass institutional changes such as easier access to credit markets (Duong & Izumida, 2002), fewer gaps in the social safety net, and changes in cultural attitudes that disfavor women. For example, while land-titling programs may promote the security of women’s land ownership, women may also face more obstacles in obtaining credit due to historical and socio-cultural reasons. Such impediments could weaken the efficaciousness of land reforms and restrict the potential of land titling to yield tangible benefits. Hence land titling reforms may be more effective if they were embedded in an integrated framework that sought to change perspectives and widen the scope of existing country-wide institutional structures.