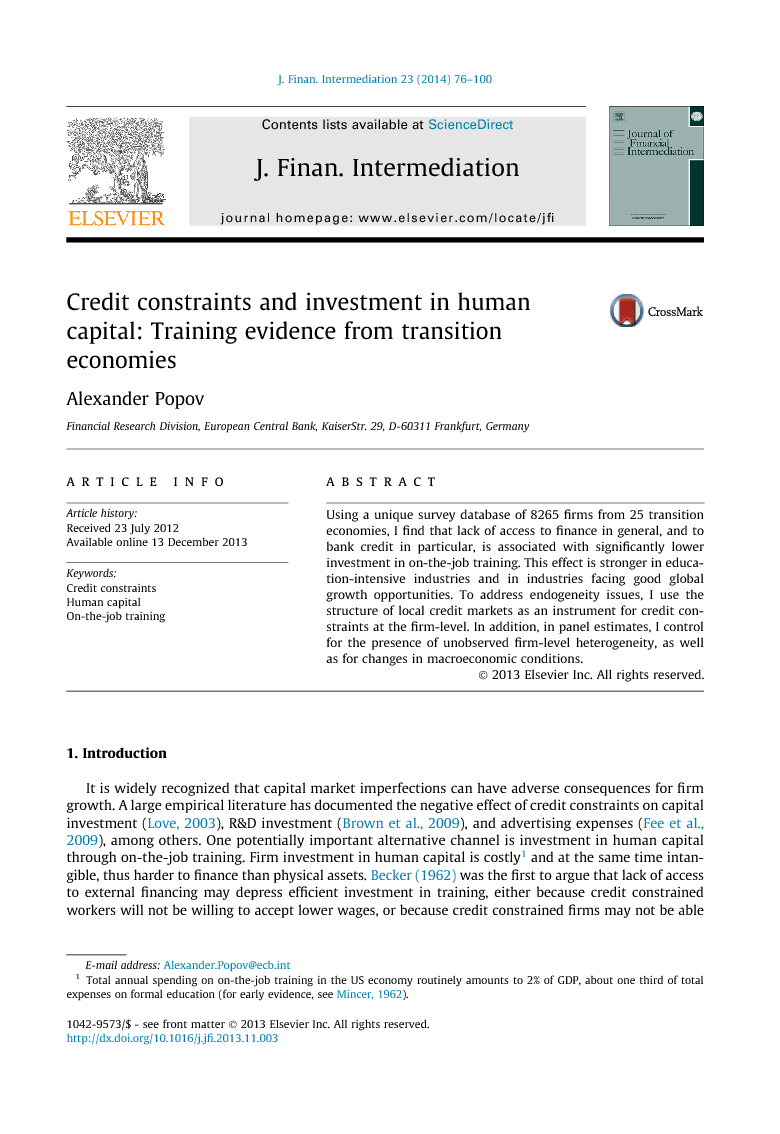 Using a unique survey database of 8265 firms from 25 transition economies, I find that lack of access to finance in general, and to bank credit in particular, is associated with significantly lower investment in on-the-job training. This effect is stronger in education-intensive industries and in industries facing good global growth opportunities. To address endogeneity issues, I use the structure of local credit markets as an instrument for credit constraints at the firm-level. In addition, in panel estimates, I control for the presence of unobserved firm-level heterogeneity, as well as for changes in macroeconomic conditions.

Theory predicts that investment in on-the-job training is sub-optimal in the presence of capital market imperfections, but data unavailability makes it difficult to distinguish this effect from the effect of firm size, the mix between general and specific training, labor contract rigidities, or oligopsonic wage-setting. I overcome this difficulty by using a unique survey dataset on 8265 firms from 25 emerging markets, which includes replies to questions about actual experience with access to finance, in order to isolate the effect of credit constraints on training. The reliance on firm-level data allows me to achieve a substantial methodological improvement over previous empirical studies: I observe a range of actual credit constraints at the firm level; I observe reliable proxies for the main alternative factors investigated in standard human capital theory and in the new training literature, notably firm size, the training mix, technological opportunities, and labor market characteristics; and I can purge the estimated effect of credit constraints on training from the bias resulting from reversed causality (e.g., inefficient firms exaggerating their credit constraints because they blame credit markets) or from omitted firm-level factors (e.g., unobserved managerial ability driving both training and access to finance). My results indicate that various types of credit constraints are consistently associated with a lower probability that a firm will pay for the training of its employees. This effect survives the inclusion of a wide range of observable firm-level and country-level characteristics, as well as the elimination of factors common for all firms in a market or an industry. Crucially, I employ three different strategies to address concerns about endogeneity. I use a difference-in-differences specification whereby I test whether credit constraints are more detrimental for investment in human capital in industries that are more likely to benefit – in terms of training – from better access to finance. In the cross-section, I employ an IV procedure where I use the structure of local credit markets to extract the exogenous element of credit constraints. In fixed effect panel regressions, I eliminate the effect of unobservable time-invariant firm-level heterogeneity. The main results of the paper survive these procedures. Finally, I find that firms cut other costs too, like capital investment and advertising expenses, in response to adverse credit market conditions, confirming that lower investment in human capital is just one of several channels through which credit constraints depress firm growth. The use of survey data also allows me to calculate the numerical effect of capital market imperfections on investment in training. According to the preferred instrumental variables regression, credit constrained firms have as much as a 15% lower probability of offering training to their employees. My estimates thus allow for a rudimentary calculation of the aggregate effect of credit constraints on training. For example, if firms in Macedonia were on average as unconstrained as firms in Slovenia (Table 1), as many as 7% more firms would be offering training to their employees, explaining around a quarter of the difference in aggregate training between the two countries. The results in the paper thus point to large and insofar not documented benefits - in terms of investment in human capital - from improving corporate access to finance.