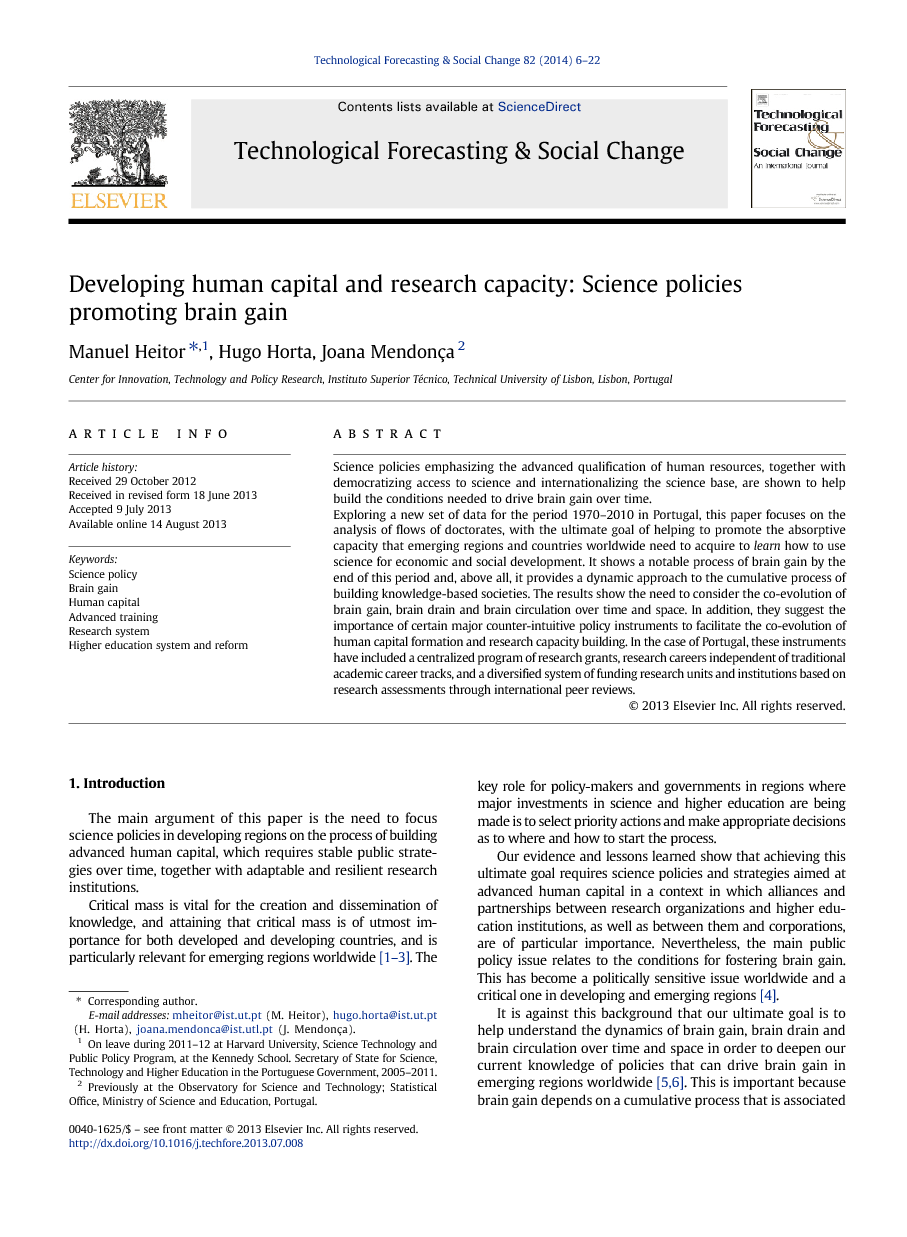 Science policies emphasizing the advanced qualification of human resources, together with democratizing access to science and internationalizing the science base, are shown to help build the conditions needed to drive brain gain over time. Exploring a new set of data for the period 1970–2010 in Portugal, this paper focuses on the analysis of flows of doctorates, with the ultimate goal of helping to promote the absorptive capacity that emerging regions and countries worldwide need to acquire to learn how to use science for economic and social development. It shows a notable process of brain gain by the end of this period and, above all, it provides a dynamic approach to the cumulative process of building knowledge-based societies. The results show the need to consider the co-evolution of brain gain, brain drain and brain circulation over time and space. In addition, they suggest the importance of certain major counter-intuitive policy instruments to facilitate the co-evolution of human capital formation and research capacity building. In the case of Portugal, these instruments have included a centralized program of research grants, research careers independent of traditional academic career tracks, and a diversified system of funding research units and institutions based on research assessments through international peer reviews.

This paper provides a dynamic approach to the process of building knowledge-based societies in developing and emerging regions and countries worldwide through a new understanding of the co-evolution of human capital formation and research capacity. The main data refer to Portugal over the period 1970–2010 and the paper explores primary source data focused on flows of doctorates in and out of the country. It shows a notable process of brain gain by the end of that period, which is discussed in terms of a new contribution to the design of science policies in emerging regions worldwide. The analysis shows the need to consider the co-evolution of brain gain, brain drain and brain circulation over time and space. It goes beyond commonplaces, leading us to argue in favor of a few major counter-intuitive measures and science policy instruments, as follows: 1. A central finding is that public investment in science associated with policies facilitating the co-evolution of human capital formation and institutional capacity building can lead to a situation of brain gain. In the specific case of Portugal, it took almost four decades to achieve reasonable international levels of investment in science and technology and to overcome a situation of continuous lagging behind international standards. This is shown to be associated with patterns of relatively sluggish or fluctuating investments in R&D for many years, reaching unprecedented levels of development only after 2008. We argue that other regions worldwide can accelerate this process, if appropriate policies are systematically adopted to facilitate the co-evolution identified in this paper. In our case, the number of researchers grew with relatively low levels of R&D funding per researcher, but at a level sufficiently attractive to foster brain gain; 2. In addition, our research suggests the key role of a major, long-term, publicly funded and centralized program of research grants, particularly for doctoral and post-doctoral grants based on independent national assessments of individual proposals, totally independent of any higher education institution. We argue that it is particularly important to implement this in the earlier and middle stages of development to prevent the investment being absorbed by the hierarchical and change-adverse environments that characterize many higher education institutions in developing regions; 3. Our analysis also shows the importance of public policies that foster a research career path in universities, independent of traditional academic careers, in order to facilitate the continuous recruitment of young researchers by academic research units following best international practices, but independent of internal university procedures. The relatively temporary and insecure nature of that research career path leads us to argue for the need for integrative measures to foster policies of gradual recruitment in the public and private labor markets; 4. Last, but not least, a public program to fund research units based on multi-annual contracts based on national research assessments, also totally independent of internal university hierarchies, helps build the institutional capacity needed in a knowledge-based society. This is again a long-term process, requiring different institutional speeds and types of multi-annual contracts. Overall, our analysis shows that understanding aspects of time and space and processes associated with advanced training of human resources and institutional building helps to promote the absorptive capacity that regions and countries need to acquire in order to learn how to use science for economic and social development. In this developmental process, our data reveal that higher education institutions are the de facto main employers of PhDs and hence the advanced qualification of human resources needs to be considered in the context of full internationalization of their region/nation, in terms of facilitating the integration of those regions/nations in knowledge networks at the highest international level. In attempting to extrapolate our results to developing and emerging regions worldwide, our analysis underlines the need to foster the advanced qualification of human resources and their international mobility during their training and early careers. In addition, we argue that science policies emphasizing the advanced qualification of human resources, together with democratizing access to science, help build the conditions that drive modern societies.