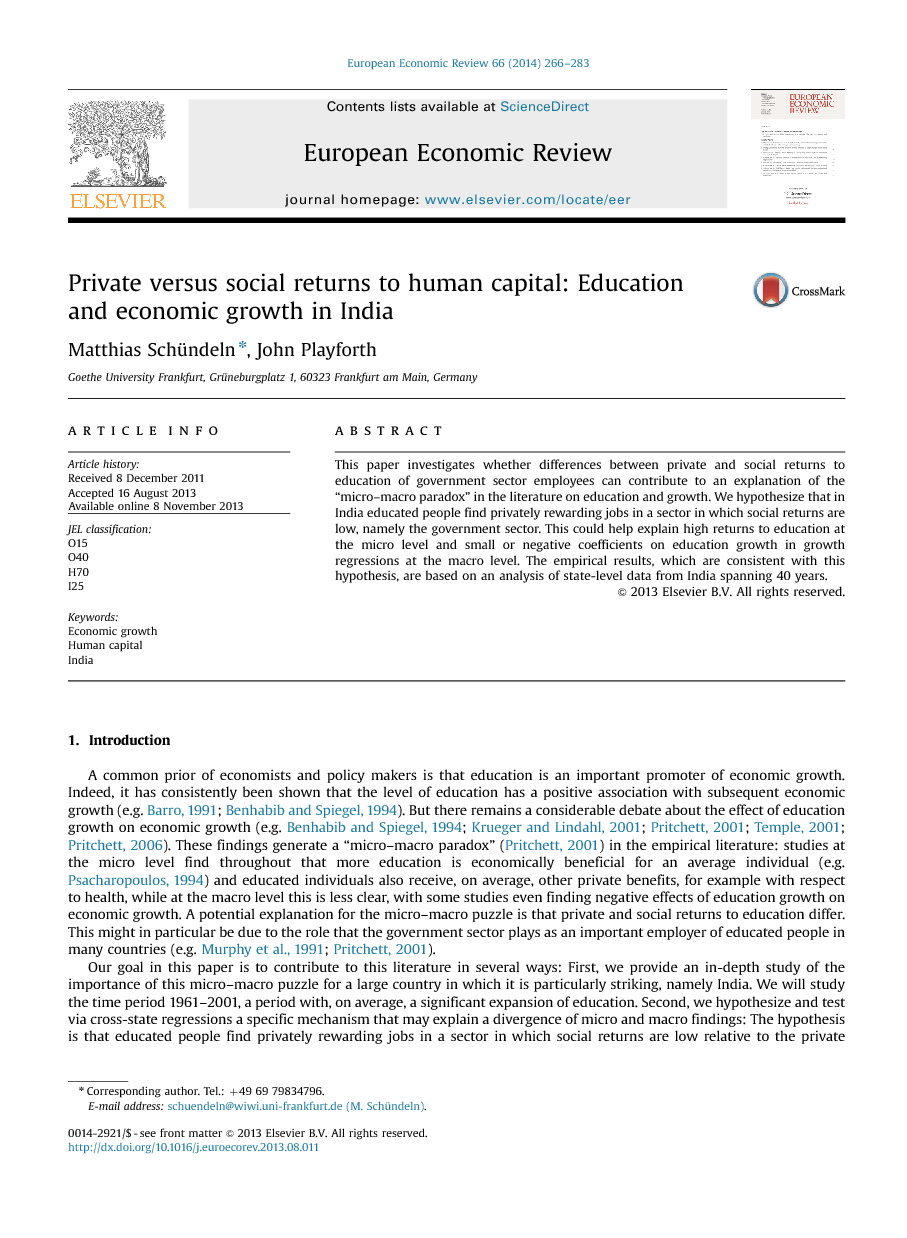 This paper investigates whether differences between private and social returns to education of government sector employees can contribute to an explanation of the “micro–macro paradox” in the literature on education and growth. We hypothesize that in India educated people find privately rewarding jobs in a sector in which social returns are low, namely the government sector. This could help explain high returns to education at the micro level and small or negative coefficients on education growth in growth regressions at the macro level. The empirical results, which are consistent with this hypothesis, are based on an analysis of state-level data from India spanning 40 years.

Education frequently takes center stage in discussions about economic development. Indeed, at the micro level, the positive effects of education for human and social development, including effects on health and wages, have been widely documented. However, at the macro level, the empirical evidence on the relation between education growth and economic growth is mixed. This paper investigates this puzzle, which so far has mainly been investigated using cross-country regressions. One contribution of this paper is therefore to employ instead within-country variation to investigate how educational expansion could have failed to promote economic growth in an economy, India, with a substantial wage premium for education. Our key contribution is to suggest and test a hypothesis that may reconcile the findings at the micro and the macro levels. We hypothesize that in India part of the explanation of the micro–macro puzzle can be found in the relationship between the large public sector and the rest of India's economy: the public sector employed the majority of educated workers at high wages, but this allocation of India's human capital failed to promote substantial growth because of the limited productivity of educated workers thus employed. The theoretical framework suggested in this paper generates a testable hypothesis, and we present evidence that is consistent with this hypothesis: the data indicate that the effect of government sector size on education's effectiveness in promoting growth was negative, economically large, and statistically significant. This suggests that government absorbed human capital in low productivity activities. Once we control for this effect of government sector size on educational effectiveness, the results indicate that the effect of education in India was positive and significant for a wide range of Indian states with relatively low levels of government. At the smallest government sector size in the sample the results imply that moving from the 25th percentile of the education growth distribution to the 75th percentile implies an increase in per capita SDP growth of between 0.2 percentage points28 and 1.1 percentage points.29 This positive effect of human capital growth is not only restricted to states with the smallest government sector size: We find that 95% of state/year observations have a government sector small enough such that they would experience a positive SDP growth effect from an increase in human capital growth.30 Can we say something more positive about the contribution of education to growth in India after the significant reforms that India underwent in the 1980s and early 1990s? First, note that in light of the dramatic improvement of economic performance in the years after 1980, one might suspect educational expansion to have begun to have a more positive effect on economic growth. We do not have enough state-level data to reliably perform pre- and post 1990 comparisons that allow us to test for statistical differences between those periods. However, the micro-evidence on public–private wage differentials shows that large positive wage differentials between the public and private sectors persisted through the 1990s, with the public sector wage premium being up to 140%. Thus, on average, it seems that outside opportunities for educated workers were still unattractive relative to the opportunities provided by the state bureaucracy, but according to our findings would have had significant social returns in terms of economic growth. The results suggest that private and social returns to education are vastly different in India and suggest that the effects of the misallocation of human capital in India were significant. Despite many issues that may be unique to India's situation, the analysis may also provide a lesson for other developing nations in which the public sector constitutes a particularly large fraction of the formal economy. This may, in the end, help reconcile economists' and policy makers' priors on the central role of education in the development process with the empirical evidence.