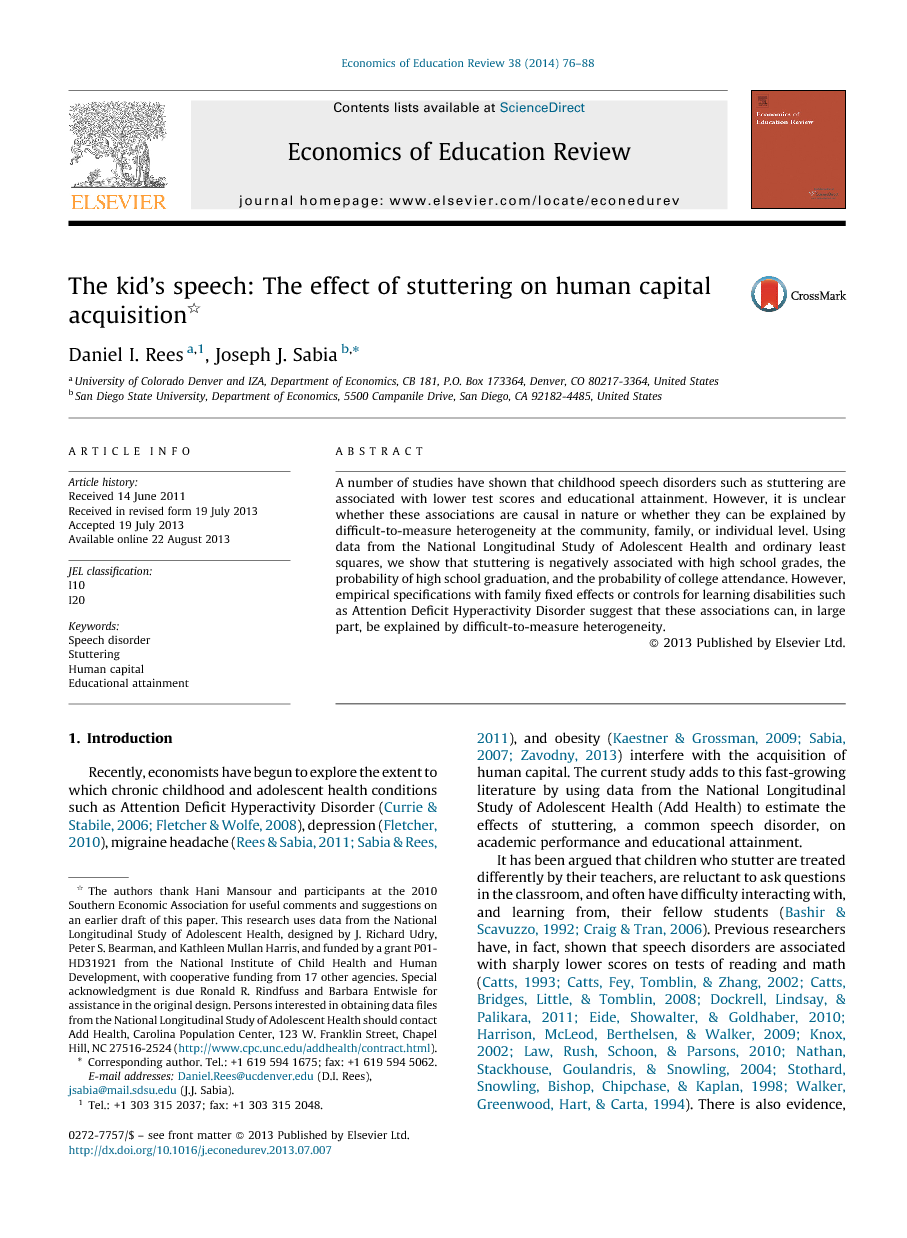 A number of studies have shown that childhood speech disorders such as stuttering are associated with lower test scores and educational attainment. However, it is unclear whether these associations are causal in nature or whether they can be explained by difficult-to-measure heterogeneity at the community, family, or individual level. Using data from the National Longitudinal Study of Adolescent Health and ordinary least squares, we show that stuttering is negatively associated with high school grades, the probability of high school graduation, and the probability of college attendance. However, empirical specifications with family fixed effects or controls for learning disabilities such as Attention Deficit Hyperactivity Disorder suggest that these associations can, in large part, be explained by difficult-to-measure heterogeneity.

Recently, economists have begun to explore the extent to which chronic childhood and adolescent health conditions such as Attention Deficit Hyperactivity Disorder (Currie and Stabile, 2006 and Fletcher and Wolfe, 2008), depression (Fletcher, 2010), migraine headache (Rees and Sabia, 2011 and Sabia and Rees, 2011), and obesity (Kaestner and Grossman, 2009, Sabia, 2007 and Zavodny, 2013) interfere with the acquisition of human capital. The current study adds to this fast-growing literature by using data from the National Longitudinal Study of Adolescent Health (Add Health) to estimate the effects of stuttering, a common speech disorder, on academic performance and educational attainment. It has been argued that children who stutter are treated differently by their teachers, are reluctant to ask questions in the classroom, and often have difficulty interacting with, and learning from, their fellow students (Bashir and Scavuzzo, 1992 and Craig and Tran, 2006). Previous researchers have, in fact, shown that speech disorders are associated with sharply lower scores on tests of reading and math (Catts, 1993, Catts et al., 2002, Catts et al., 2008, Dockrell et al., 2011, Eide et al., 2010, Harrison et al., 2009, Knox, 2002, Law et al., 2010, Nathan et al., 2004, Stothard et al., 1998 and Walker et al., 1994). There is also evidence, albeit weaker, that children with speech disorders go on to receive fewer years of education than their counterparts without speech disorders (O’Brian et al., 2011, Johnson et al., 2010 and Snowling et al., 2001). These results are consistent with the hypothesis that speech disorders, through interfering with classroom learning and adding to the cost of investing in human capital, lead to reduced academic performance and educational attainment. However, previous studies in this area have typically relied on non-representative samples, and, to our knowledge, no previous study has attempted to account for the potential influence of unobservables. Thus, there exists the possibility that the negative association between having a speech disorder and academic performance is spurious—i.e., driven by difficult-to-measure factors at the level of the community, family or individual. The Add Health data contain detailed information on the behavior, personality, and family background of respondents. This richness allows us to observe, and control for, a much wider variety of potentially confounding factors than were available to the majority of previous researchers. In addition, by comparing the experiences of siblings with discordant stuttering experiences, we are able to control for family-level unobservables such as parental involvement. Finally, there is evidence that ADHD and other learning disabilities such as dyslexia are associated with stuttering (Ajdacic-Gross et al., 2010, Arndt and Healey, 2001, Blood and Seider, 1981, Blood et al., 2003 and Blood et al., 2009). Because the Add Health asked questions aimed at assessing whether respondents had a learning disability such as Attention Deficit Hyperactivity Disorder (ADHD) or dyslexia, we are able to explore whether these factors help explain the relationship between stuttering and the outcomes under study. Our baseline ordinary least squares (OLS) estimates suggest that stutters have lower grades than their counterparts who do not suffer from a speech disorder. Stuttering is also associated with a lower probability of graduating high school and a lower probability of attending college, results that are consistent with the argument that stuttering directly interferes with classroom learning. However, when we restrict our sample to full biological siblings (including twins) and add family fixed effects, these associations become much smaller in magnitude, consistent with the hypothesis that family-level unobservables play an important role. Moreover, when we control for a history of ADHD or the presence of another learning disability, the estimated effects of stuttering shrink dramatically and become statistically indistinguishable from zero at conventional levels. These findings suggest that the impact of stuttering on human capital acquisition is much weaker than previously argued.

Although previous studies have shown that children with speech disorders score lower on tests of reading and math (Catts, 1993, Catts et al., 2002, Catts et al., 2008, Eide et al., 2010, Harrison et al., 2009, Knox, 2002, Law et al., 2010, Nathan et al., 2004, Stothard et al., 1998 and Walker et al., 1994) and go on to receive fewer years of education than their counterparts without speech disorders (Johnson et al., 2010, O’Brian et al., 2011 and Snowling et al., 2001), their results could easily have been driven by unobservables at the individual, family, school, or neighborhood level. Using data drawn from the National Longitudinal Study of Adolescent Health (Add Health), we explore the relationship between stuttering, a common speech disorder, and three outcomes: high school grade point average, the probability of high school graduation, and the probability of college attendance. Consistent with the results of previous studies, baseline OLS estimates produce evidence that stuttering is negatively related to all three of these outcomes. However, propensity score matching and including family fixed effects often produced smaller and statistically insignificant estimates. Likewise, controlling for whether the respondent has ADHD or some other learning disability resulted in small, statistically insignificant estimates of the effect of stuttering on our outcomes. Research by Currie and Stabile (2006), Kaestner and Grossman (2009), Fletcher (2010), Rees and Sabia (2011), Sabia and Rees (2011), and Zavodny (2013) provides evidence that chronic childhood health conditions such as ADHD, obesity, and migraine headache can negatively impact the acquisition of human capital. Our results are consistent with the hypothesis that stuttering typically does not interfere with the acquisition of human capital to the same extent as do these other chronic childhood health conditions. They are also consistent with the hypothesis that parents devote more attention and resources to a child who stutters. In fact, Fletcher and Wolfe (2008, p. 799) speculate that the reason their within-family estimates of the relationship between ADHD and educational attainment are so much smaller than their cross-sectional estimates is that “parents are more able to compensate children with ADHD, which could lead to smaller within-sibling differences in educational outcomes...” Although, due to data limitations, we were not able to distinguish between occasional and severe stuttering, our findings underscore the importance of family and individual heterogeneity. Future researchers interested in documenting the relationship between stuttering and a range of social and educational outcomes would be well advised to consider these potentially important sources of bias. Because the impact of stuttering on human capital acquisition may be spurious, it is tempting to conclude that stuttering does not merit the same attention from educators and health care professionals. However, stuttering clearly imposes other costs through interfering with communication and social interactions. Moreover, at least some portion of these costs may be quantifiable. One study found that 20 percent of stutterers reported having been turned down for a job or promotion because of their impairment (Klein & Hood, 2004), and stutterers who underwent a speech-fluency treatment program showed improved job promotion (Craig & Calver, 1991). In future work, we plan to use the Add Health data to explore the effects of stuttering on labor force participation, occupational choice, productivity and earnings. To our knowledge, no previous study has used nationally representative data to examine the effects of stuttering in the workplace.