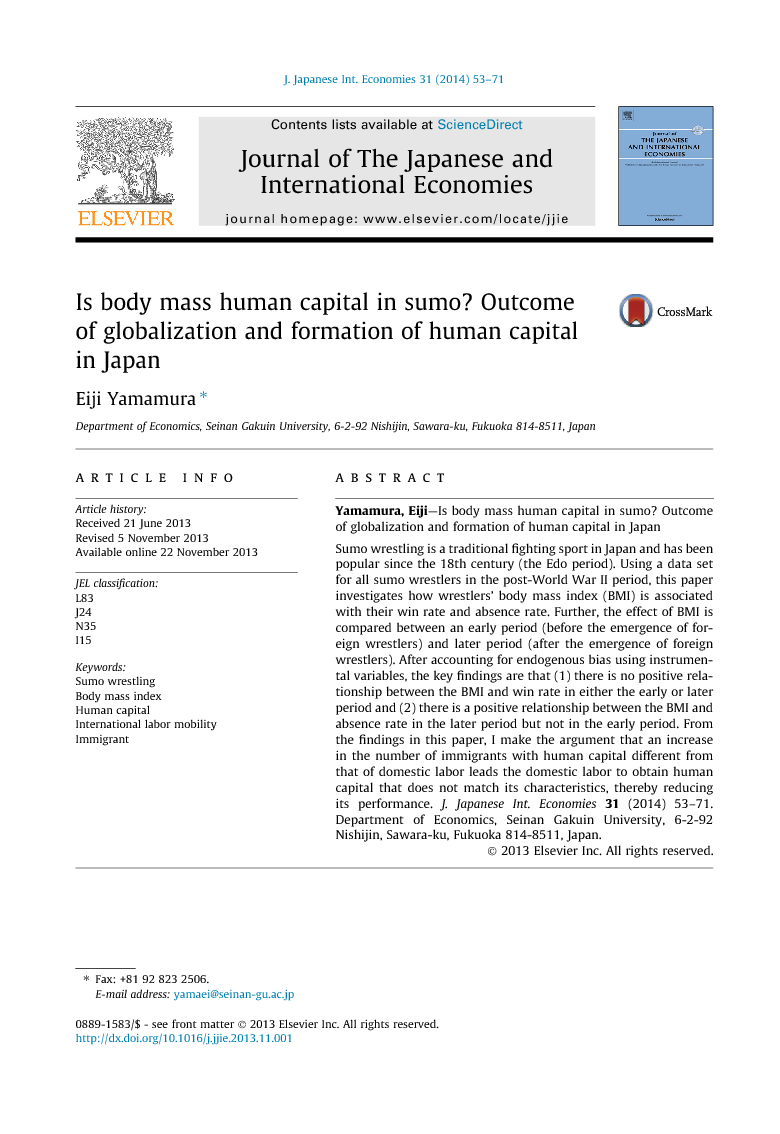 Sumo wrestling is a traditional fighting sport in Japan and has been popular since the 18th century (the Edo period). Using a data set for all sumo wrestlers in the post-World War II period, this paper investigates how wrestlers’ body mass index (BMI) is associated with their win rate and absence rate. Further, the effect of BMI is compared between an early period (before the emergence of foreign wrestlers) and later period (after the emergence of foreign wrestlers). After accounting for endogenous bias using instrumental variables, the key findings are that (1) there is no positive relationship between the BMI and win rate in either the early or later period and (2) there is a positive relationship between the BMI and absence rate in the later period but not in the early period. From the findings in this paper, I make the argument that an increase in the number of immigrants with human capital different from that of domestic labor leads the domestic labor to obtain human capital that does not match its characteristics, thereby reducing its performance.

Sumo wrestling is a traditional fighting sport in Japan and has been popular since the 18th century. Following World War II, sumo, like other professional sports, such as football (Berlinschi et al., 2013) and baseball (Schmidt and Berri, 2005), has become globalized. In 1968, Takamiyama became the first non-Asian to reach the top division (makuuchi)1 in sumo. Twenty-five years later, in 1993, Akebono became the first foreign-born Yokozuna (the highest rank in the top division). Both Takamiyama and Akebono were born in the United States. Since the retirement of Takanohana in 2003, there has been no domestic Japanese Yokozuna. In 2012, 7.5% of sumo wrestlers were officially listed as foreigners, and 33% of wrestlers in the top division were foreigners. 2 Following these drastic changes, sumo has become an international sport in the 21st century. Differences in the labor quality of sumo wrestlers might be due to technical skill and physical strength. Sumo does not have weight categories, and hence, an increase in body mass might result in higher performance. Hence, the body mass might be considered as human capital in the sumo labor market.3 Furthermore, foreign wrestlers, especially those born in the United States, have a great advantage in terms of body mass. “Upon their initiation into the sumo world, foreign wrestlers are already equipped with a physique equivalent to that of wrestlers in the top division. They have trained in American football or basketball, and have been excellent players” (Nakajima, 2003, 62). In other words, these foreign wrestlers were not obese even though their body mass was extremely high. As a consequence, competitive pressure increased, giving domestic sumo wrestlers a great incentive to increase body mass.4 On the other hand, extra weight seems to increase injury, which hampers the wrestler’s performance. This is the negative effect of body mass. Wrestlers are thought to train to obtain an optimum body mass that trades off these positive and negative effects. However, in 2000, the average body fat ratio was 38.4%, which is far higher than ideal for an athlete (Nakajima, 2003, 59).5 “The upper weight limit of a Japanese wrestler with consideration of muscular strength was estimated to be 180 kg. That is, it is not appropriate from the viewpoint of exercise that a wrestler’s weight exceeds 180 kg” (Nakajima, 2003, 60). However, after the emergence of Takamiyama, there have been 18 wrestlers weighing in excess of 180 kg. The inflow of foreign wrestlers has led Japanese wrestlers to misestimate the optimum body mass. Previous works on sumo (Duggan and Levitt, 2002 and West, 2004) have focused on the norm or the rule shared in the closed sumo world. However, the sumo world has been under the influence of globalization and thus affected by an inflow of foreign-born labor. It is worth investigating the effect of the increasing number of foreign wrestlers on human capital accumulation of domestic wrestlers to explore the impact of immigrants in the labor market. Many works have investigated an individual’s physical characteristics (or sporting activities) and their outcomes in the labor market (e.g., Lechner, 2009 and Rooth, 2011). However, these works did not take international labor mobility into account. The sumo world is generally characterized as having been closed to strangers and so was not influenced from the outside until after World War II. That is, Japanese wrestlers are thought to have shared and behaved according to a social norm. On the other hand, the critical influence of international labor mobility has been observed in other professional sports (Schmidt and Berri, 2005 and Berlinschi et al., 2013). Naturally, the question arises whether globalization affects the behavior of sumo wrestlers. Analyzing the sumo labor market can be regarded as a natural experiment for examining how inflow of heterogeneous labor affects a closed traditional labor market governed by a social norm. To explore the question, using the tournament records of sumo wrestlers in the post-World War II period (1945–2013), during which there was a drastic change in the sumo labor market, this paper considers how the body mass index (BMI) is associated with the win rate and absence rate of sumo wrestlers. It also compares the relationships before and after the emergence of foreign wrestlers. The paper is organized as follows. Section 2 explains the data set and simple econometric framework. The results of the estimations and a discussion are provided in Section 3. The final section offers concluding observations.

Since the 1970s, an increasing number of foreigners have entered the sumo labor market, leading sumo to become an international sport. In particular, wrestlers born in the United States have a great advantage in terms of physique over domestic Japanese wrestlers. In such a drastically-changing environment, to counter the inflow of foreign wrestlers, domestic Japanese wrestlers have accumulated human capital by increasing their body mass. The increase in body mass is expected to improve wrestlers’ performance. On the other hand, it increases the probability of injury, thus lowering performance. Hence, it is an empirical question as to whether the body mass is positively associated with a wrestler’s performance. This paper used a dataset of tournament records for each wrestler to investigate the effect of wrestlers’ BMI on their win rate and absence rate. The key findings are that (1) an increase in BMI did not result in a higher win rate in either the closed period (before the arrival of foreign wrestlers) or the international period (after their arrival) and (2) an increase in BMI raised the absence rate in the international period but reduced it in the closed period. Using the simulation method, an increase in immigration improves the Japanese economy when the immigration effect is examined at the macro level (Shimasawa and Oguro Kazumasa, 2010). However, the micro-level research conducted in this paper suggests that immigration has different implications. In my interpretation of the results in this paper, before the arrival of foreign-born wrestlers, an increase in body mass reflected the strengthening of a wrestler’s physique. This reduced the probability of injury, although it did not increase the win rate. After the arrival of foreign wrestlers, overweight wrestlers became more inclined to suffer injury and did not have improved win rates. Considering these findings jointly leads me to argue that an increase in body mass improved performance prior to globalization. However, the competition from foreign wrestlers led domestic wrestlers to become overweight, which hampered their performance. The performance of wrestlers depends not only on body mass but also on technique and agility. In comparison with Westerners, Japanese people are generally shorter and more lightweight, suggesting that Japanese wrestlers have a comparative advantage in terms of technique and agility. Hence, the best strategy for Japanese domestic wrestlers would be to improve technique and agility rather than increase body mass. Traditional training encourages Japanese sumo wrestlers to maintain an optimum body mass and maximize their performance by improving their agility and technique matched to their physique. Sumo society is known to have been governed by the traditional social norm, and Japanese wrestlers are therefore thought to put a high value on traditions, including the way of training. However, the findings of this study make it clear that, in fact, the arrival of foreign wrestlers with better physiques misled domestic wrestlers into gaining weight above their optimum level. There seems to be the possibility of multiple equilibria in the labor market. As a consequence of the arrival of heterogeneous foreign wrestlers, the equilibrium of the traditional sumo world became the equilibrium of the globalized sumo world. From the findings in this paper, I make the argument that an increase in immigrants with human capital different from that of domestic labor leads the domestic labor to obtain human capital that does not match their characteristics, thereby reducing their performance. There is, however, another possibility, observed in professional football, that learning from players with advanced human capital such as excellent skill or physique improves the performance of players in less-developed countries (Yamamura, 2009 and Berlinschi et al., 2013). Hence, it is important to consider which type of human capital matches the characteristics of domestic labor when we analyze the learning effect of foreign labor in less-developed countries.