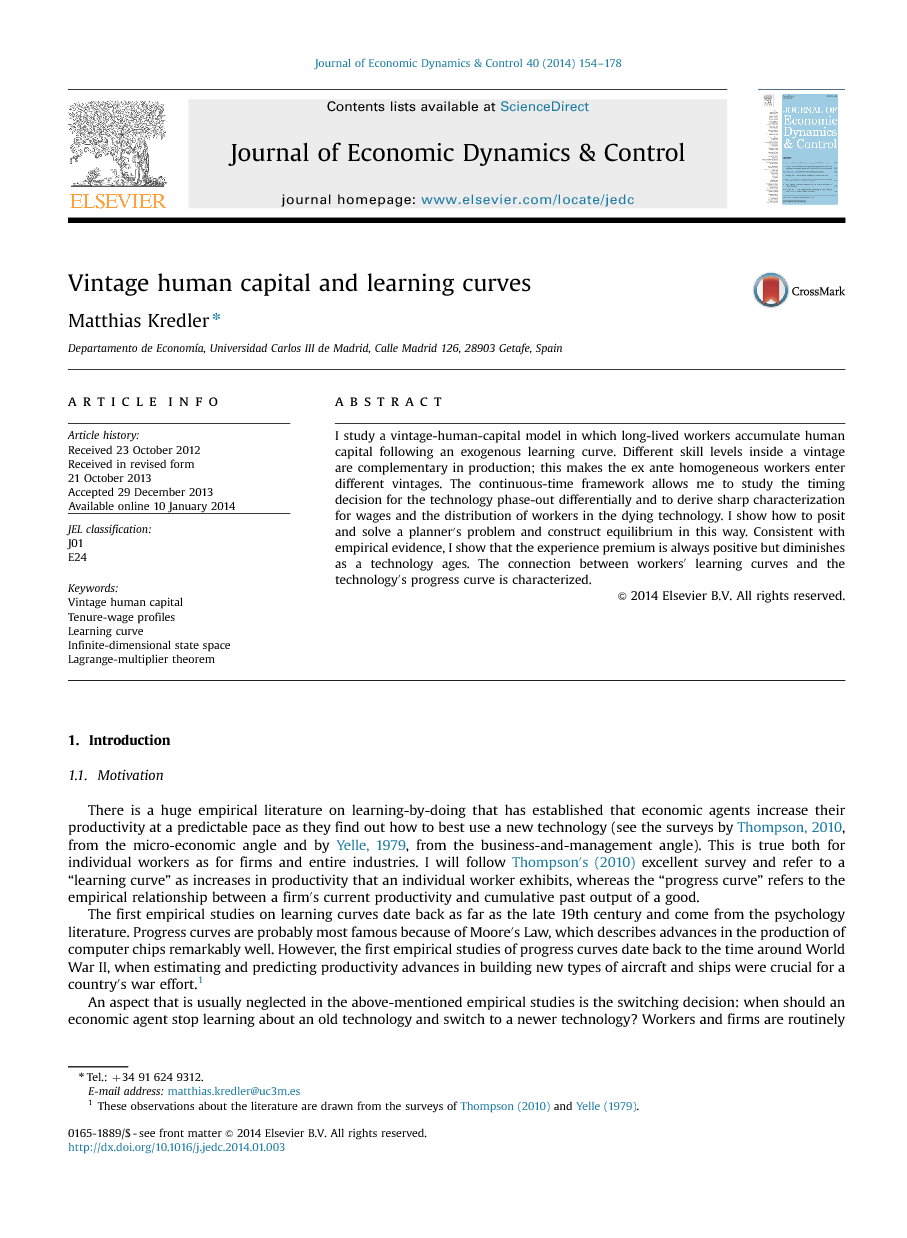 I study a vintage-human-capital model in which long-lived workers accumulate human capital following an exogenous learning curve. Different skill levels inside a vintage are complementary in production; this makes the ex ante homogeneous workers enter different vintages. The continuous-time framework allows me to study the timing decision for the technology phase-out differentially and to derive sharp characterization for wages and the distribution of workers in the dying technology. I show how to posit and solve a planner's problem and construct equilibrium in this way. Consistent with empirical evidence, I show that the experience premium is always positive but diminishes as a technology ages. The connection between workers' learning curves and the technology's progress curve is characterized.

There is a huge empirical literature on learning-by-doing that has established that economic agents increase their productivity at a predictable pace as they find out how to best use a new technology (see the surveys by Thompson, 2010, from the micro-economic angle and by Yelle, 1979, from the business-and-management angle). This is true both for individual workers as for firms and entire industries. I will follow Thompson's (2010) excellent survey and refer to a “learning curve” as increases in productivity that an individual worker exhibits, whereas the “progress curve” refers to the empirical relationship between a firm's current productivity and cumulative past output of a good. The first empirical studies on learning curves date back as far as the late 19th century and come from the psychology literature. Progress curves are probably most famous because of Moore's Law, which describes advances in the production of computer chips remarkably well. However, the first empirical studies of progress curves date back to the time around World War II, when estimating and predicting productivity advances in building new types of aircraft and ships were crucial for a country's war effort.1 An aspect that is usually neglected in the above-mentioned empirical studies is the switching decision: when should an economic agent stop learning about an old technology and switch to a newer technology? Workers and firms are routinely faced with the decision if to further exploit their accumulated knowledge in an old technology, or to upgrade to a new, more productive technology that requires learning. Examples in reality are a computer programmer switching to a new programming language, or a car company opening a new plant that implements a revolutionized manufacturing method. The technology-specific skills that agents accumulate over time are called vintage human capital in the literature (a term coined by Chari and Hopenhayn, 1991). This paper aims to study the connection between learning curves and vintage human capital in a theoretical model. I take learning curves for individual workers as given and ask the following questions: when, or if at all, should workers switch to new technologies? How should firms manage the division of tasks between workers of different experience levels? What is the connection between workers' learning curves and the firm's/technology's progress curve? I do this in a setting in which workers of different skill levels are complementary in production. This gives rise to a non-trivial connection between workers' individual learning curve and the technology's progress curve, which is a new contribution to the literature (to the best of my knowledge). I find that workers go through cycles of learning and scrapping of skill. Technologies are shut down once returns to learning are sufficiently low, and all workers from the obsolete vintage re-locate to newer vintages. Unlike most other labor-market theories, the model predicts that workers experience initial wage cuts upon re-location. Since different skill levels are complementary and existing vintages need a supply of low-skill workers, workers enter technologies of different age cohorts and not only the frontier vintage. The model has rich predictions on earnings profiles of workers over their careers and on the wage structure in different technologies. I show that within each technology, higher skill is always rewarded by higher wages, but that this skill premium decreases over time and eventually vanishes entirely as the technology becomes obsolete. This is driven by skill becoming less scarce as the technology ages. The model predictions are consistent with evidence provided by Michelacci and Quadrini (2009) and Kredler (in press), who find that entry wages are lower but the premium on experience is higher in fast-growing industries. They are also consistent with the premium on experience being higher in young establishments (see the evidence in Kredler, in press). The model also predicts that a technology's progress curve is steeper than individual workers' learning curves. The reason is that a vintage can continuously draw on learning by newly entering workers who are on the steep part of their learning curves. Thus a firm or industry can avoid decreasing returns in learning for longer than an individual since it continuously changes its skill mix. Finally, I show that a technology's productivity growth must fall below the economy-wide rate of technical change before it becomes obsolete and is phased out. From the technical point of view, I exploit a continuous-time setting to study the timing decision of a technology phase-out differentially. This leads to sharp characterizations for wages and the distribution of workers in the dying vintage. I show how to state and solve a planner's problem and construct a competitive equilibrium from there. A key problem that has to be overcome is that the distribution of workers over the state space (a choice variable for the planner) has to be linked to a collection of feasible policies by workers. To ensure this, I derive a set of constraints on the distribution that are necessary and sufficient for feasibility. I then use these constraints in a maximization problem and characterize wages and workers' behavior, drawing heavily on the Lagrange-multiplier theorem for infinite-dimensional spaces. The remainder of the paper is organized as follows: Section 1.2 discusses the relationship of the paper to the literature. Section 2 presents the economic environment, Section 3 defines and characterizes the competitive equilibrium. Section 4 derives further results from the vantage point of the planner's problem and shows that the solution to the planner's problem constitutes a competitive equilibrium. Section 5 illustrates the results in a numerical example, and Section 6 concludes.

I conclude with a brief comparison of the learning-curve approach to the human-capital approach. There is a large literature that studies the implications of endogenous human-capital accumulation, which stands in contrast to the exogenous learning curve used in this paper. Particularly related is Kredler (in press), who studies a vintage setting in which skill accumulation is endogenous. His model has two important predictions that are in line with the current paper, but which rely importantly on the human-capital-accumulation mechanism. First, overtaking occurs as entrants into new technologies accumulate human capital faster than entrants into older technologies . Second, wage compression takes place inside vintages as entrants invest more in human capital than incumbents, the high-skilled being held back by an upper bound on human capital. The current paper shows that neither overtaking nor wage compression depend on the particular assumptions made on skill accumulation, but that another force is paramount in world where skill is technology-specific: the relative scarcity of skill. The key mechanism is that as a technology ages, skill becomes more abundant and the premium on it decreases.