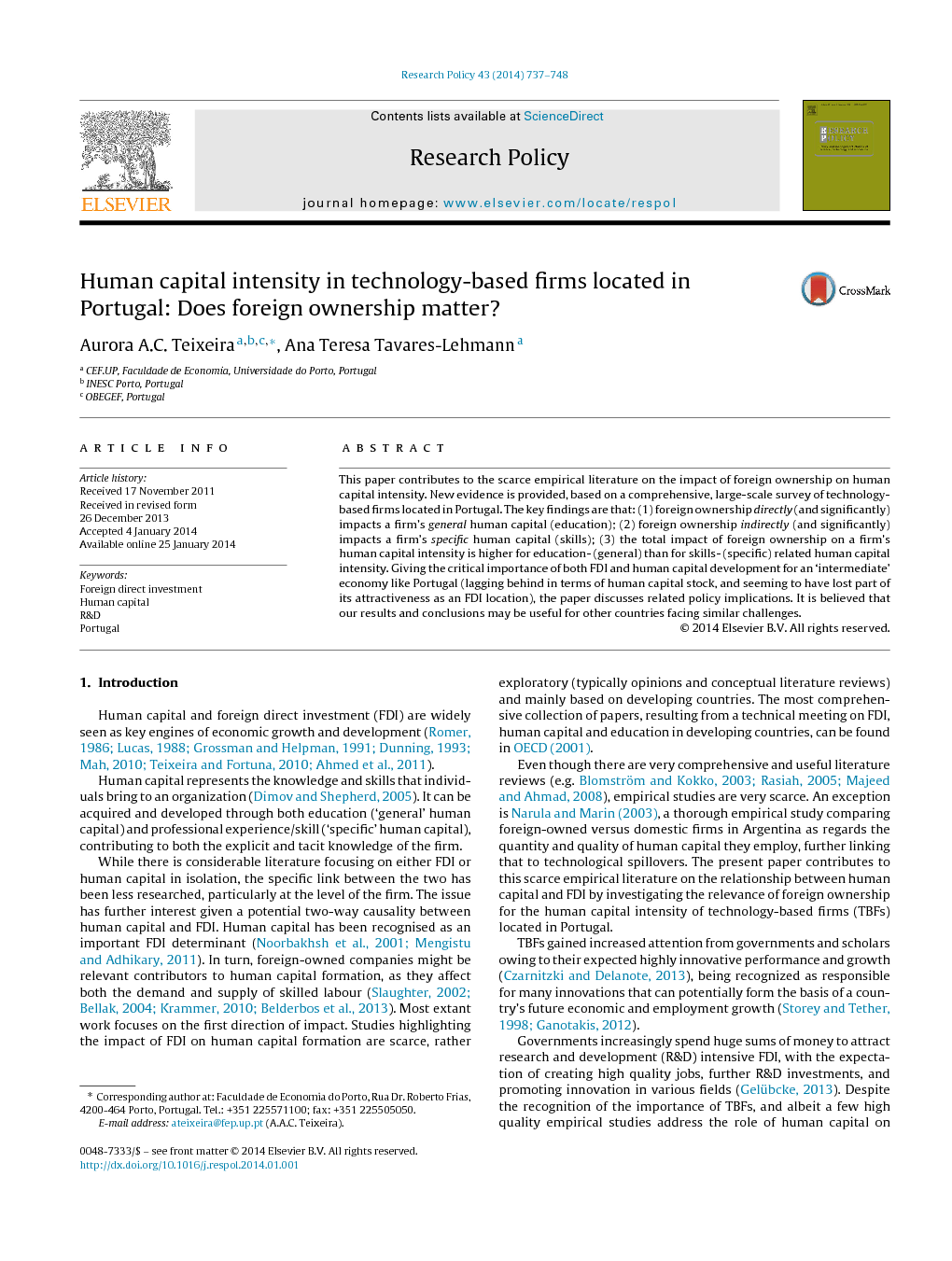 Human capital and foreign direct investment (FDI) are widely seen as key engines of economic growth and development (Romer, 1986, Lucas, 1988, Grossman and Helpman, 1991, Dunning, 1993, Mah, 2010, Teixeira and Fortuna, 2010 and Ahmed et al., 2011). Human capital represents the knowledge and skills that individuals bring to an organization (Dimov and Shepherd, 2005). It can be acquired and developed through both education (‘general’ human capital) and professional experience/skill (‘specific’ human capital), contributing to both the explicit and tacit knowledge of the firm. While there is considerable literature focusing on either FDI or human capital in isolation, the specific link between the two has been less researched, particularly at the level of the firm. The issue has further interest given a potential two-way causality between human capital and FDI. Human capital has been recognised as an important FDI determinant (Noorbakhsh et al., 2001 and Mengistu and Adhikary, 2011). In turn, foreign-owned companies might be relevant contributors to human capital formation, as they affect both the demand and supply of skilled labour (Slaughter, 2002, Bellak, 2004, Krammer, 2010 and Belderbos et al., 2013). Most extant work focuses on the first direction of impact. Studies highlighting the impact of FDI on human capital formation are scarce, rather exploratory (typically opinions and conceptual literature reviews) and mainly based on developing countries. The most comprehensive collection of papers, resulting from a technical meeting on FDI, human capital and education in developing countries, can be found in OECD (2001). Even though there are very comprehensive and useful literature reviews (e.g. Blomström and Kokko, 2003, Rasiah, 2005 and Majeed and Ahmad, 2008), empirical studies are very scarce. An exception is Narula and Marin (2003), a thorough empirical study comparing foreign-owned versus domestic firms in Argentina as regards the quantity and quality of human capital they employ, further linking that to technological spillovers. The present paper contributes to this scarce empirical literature on the relationship between human capital and FDI by investigating the relevance of foreign ownership for the human capital intensity of technology-based firms (TBFs) located in Portugal. TBFs gained increased attention from governments and scholars owing to their expected highly innovative performance and growth (Czarnitzki and Delanote, 2013), being recognized as responsible for many innovations that can potentially form the basis of a country's future economic and employment growth (Storey and Tether, 1998 and Ganotakis, 2012). Governments increasingly spend huge sums of money to attract research and development (R&D) intensive FDI, with the expectation of creating high quality jobs, further R&D investments, and promoting innovation in various fields (Gelübcke, 2013). Despite the recognition of the importance of TBFs, and albeit a few high quality empirical studies address the role of human capital on the performance of such firms (Colombo and Grilli, 2005, Colombo and Grilli, 2010 and Ganotakis and Love, 2012), to the best of our knowledge no published empirical contributions exist relating TBFs’ human capital intensity and FDI. This paper focuses on an under-researched empirical setting, Portugal, for which no similar study exists. Moreover, the themes of FDI and human capital development are particularly relevant to this ‘peripheral’ (Benito and Narula, 2008) or ‘intermediate’ (Molero, 1995) European economy, marked by convergence difficulties vis-à-vis the European Union, and with a considerable human capital and technological disadvantage vis-à-vis developed countries in general ( Soukiazis and Antunes, 2013). Additionally, Portugal embraced recently a proactive FDI attraction policy, recognizing the potential role foreign multinationals could have in upgrading Portugal's industrial fabric and in the accumulation of competences. Therefore, the theme underlying this paper is a critical one, not only for the Portuguese economy, but also for other countries with similar challenges. 1 Given the well documented relevance of human capital for organizations’ innovative and economic performance (Unger et al., 2011, Frank and Obloj, 2013 and Santarelli and Tran, 2013), especially those characterized by high levels of knowledge-intensity (Bosma et al., 2004), such as TBFs, this paper's main research question is: Does foreign ownership matter for the (‘general’ and ‘specific’) human capital intensity of TBFs located in Portugal? The remainder of the paper is structured as follows. Section 2 reviews extant literature on human capital and FDI, highlighting their connection with economic growth and development, and puts forward the hypotheses tested in the paper. Section 3 presents the data, providing descriptive statistics on respondent TBFs located in Portugal, specifically concerning their human capital traits and foreign ownership structure. The following section explains the empirical methodology, presents the econometric models estimated, and discusses the results obtained. The final section concludes and derives policy implications.