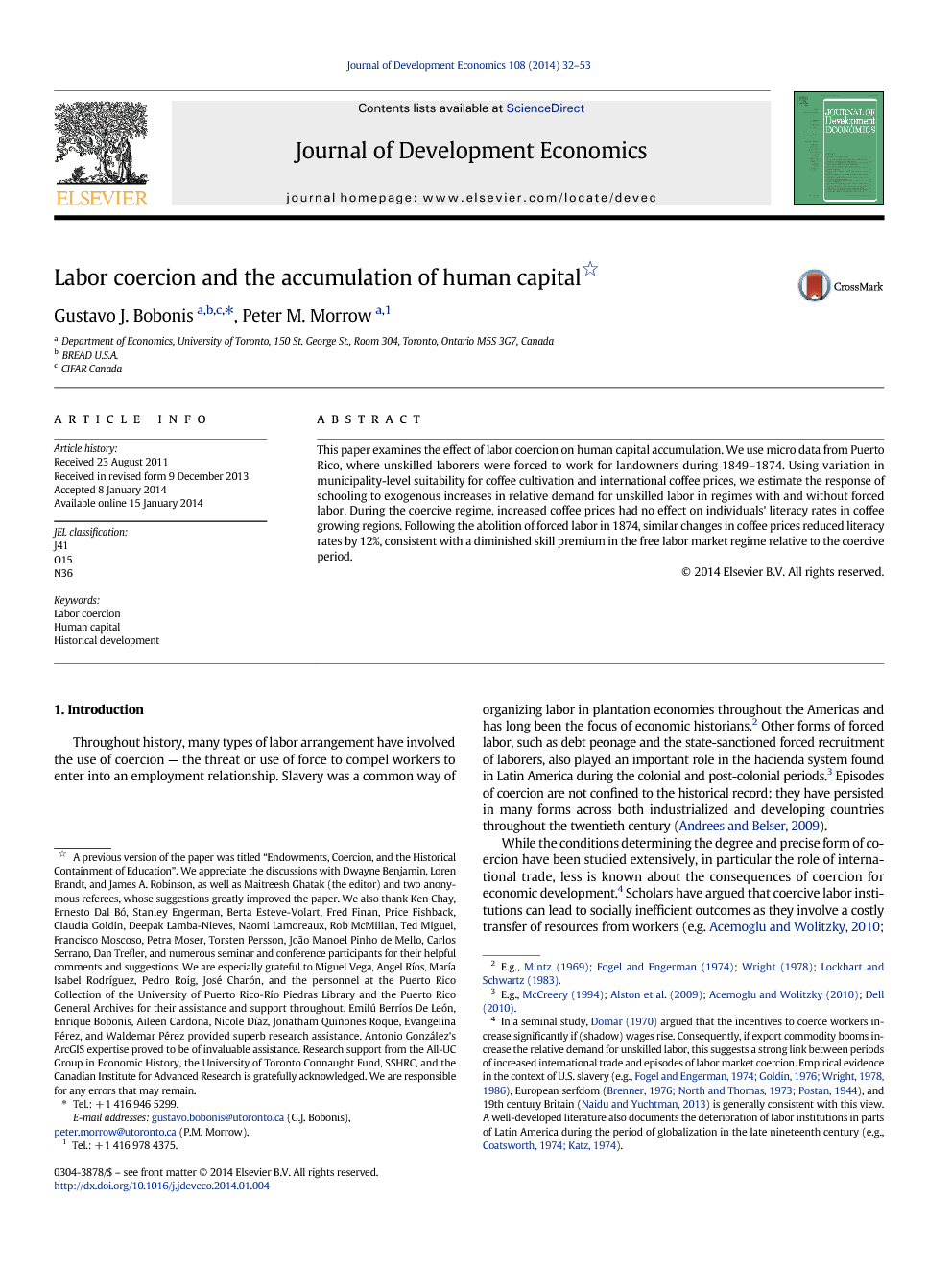 This paper examines the effect of labor coercion on human capital accumulation. We use micro data from Puerto Rico, where unskilled laborers were forced to work for landowners during 1849–1874. Using variation in municipality-level suitability for coffee cultivation and international coffee prices, we estimate the response of schooling to exogenous increases in relative demand for unskilled labor in regimes with and without forced labor. During the coercive regime, increased coffee prices had no effect on individuals' literacy rates in coffee growing regions. Following the abolition of forced labor in 1874, similar changes in coffee prices reduced literacy rates by 12%, consistent with a diminished skill premium in the free labor market regime relative to the coercive period.

This paper studies whether changes in the incentive for elites to enforce coercive labor institutions affected individuals' human capital accumulation decisions during coffee booms throughout the second half of the nineteenth century in Puerto Rico. We find that, under a coercive labor regime, local governments in coffee growing regions allocated more resources to the enforcement of coercive measures arguably with the goal of depressing the realized wage of unskilled labor. While this reduced the public provision of education, it also, surprisingly, induced workers to demand significantly more schooling leading to no change in the equilibrium amount of educational attainment in response to rising coffee prices. Following the abolition of these coercive measures in 1874, rising coffee prices correlated with declining literacy rates, consistent with a ‘resource curse’ in which individuals' perceived opportunity cost of schooling increases during commodity booms. Our results are consistent with models where, in the context of a free labor market, positive coffee price changes lead to a decrease in the skill premium and therefore a reduction in human capital investment. However, in a coercive regime, unskilled wages are artificially suppressed and therefore this effect is mitigated as workers avoid coercion and invest in human capital. After these coercive institutions are removed, similar changes in coffee prices reduce literacy rates, consistent with a diminished skill premium. This does not imply that workers are better off as a result of coercion. In fact, unskilled and skilled workers' welfare, as measured by lifetime income, is lower under the coercive labor regime than in a free labor market. In addition, our results raise a fundamental identification issue in assessing the relationship between episodic coercion and the accumulation of human capital. Following the insight of Domar (1970), coercion is likely to be present when demand for unskilled labor is high. However, demand for human capital is also likely to be low when demand for unskilled labor is high. Consequently, when looking at a negative (contemporary) relationship between some measure of human capital and whether coercion has occurred in the past, one must be careful to rule out if that relationship is simply coming from the demand side. Finally, the paper also provides evidence broadly consistent with North–south models of divergence with endogenous skill acquisition as trade can exacerbate initial skill differences across countries by raising the return to the relatively abundant factor. While we do not consider such mechanisms here, Stokey (1991) considers positive externalities to education such that trade can lead to lower human capital accumulation and economic growth in unskilled labor abundant countries. Although coercion of unskilled workers is not an acceptable institution because of the resulting limitations on the freedom of an individual (Sen, 1999), such mechanisms would suggest that policies that increase the skill premium and induce human capital accumulation may be socially beneficial. Empirically considering the long run relationship between historical labor market institutions, human capital accumulation, and growth remains an important next step in this line of research.