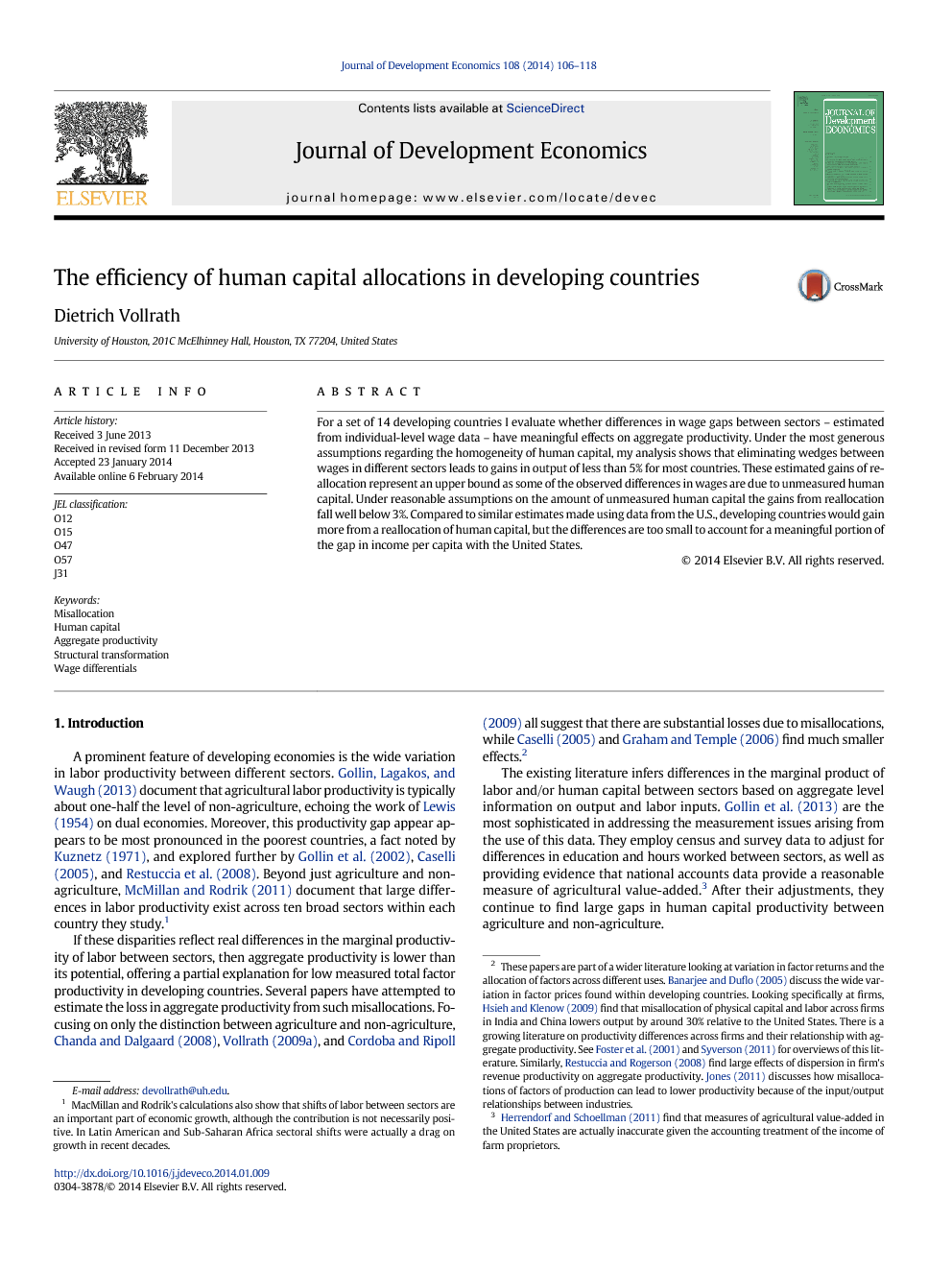 For a set of 14 developing countries I evaluate whether differences in wage gaps between sectors – estimated from individual-level wage data – have meaningful effects on aggregate productivity. Under the most generous assumptions regarding the homogeneity of human capital, my analysis shows that eliminating wedges between wages in different sectors leads to gains in output of less than 5% for most countries. These estimated gains of reallocation represent an upper bound as some of the observed differences in wages are due to unmeasured human capital. Under reasonable assumptions on the amount of unmeasured human capital the gains from reallocation fall well below 3%. Compared to similar estimates made using data from the U.S., developing countries would gain more from a reallocation of human capital, but the differences are too small to account for a meaningful portion of the gap in income per capita with the United States.

Large differences in output per worker across sectors suggest that developing countries may be operating well below their maximum efficiency. One possible explanation for this is that human capital is misallocated across different sectors within these countries. This paper calculates the hypothetical aggregate impact of this misallocation. In contrast to the existing macro-level literature that uses aggregate data, I use micro-level wage data from 14 developing countries. With this data I use Mincerian regressions to find gaps between sector-level wages and the average wage, which I term “wage-wedges”. The wage-wedges imply some type of misallocation of human capital across sectors. I am then able to calculate the counter-factual level of aggregate productivity that a country would achieve if I eliminated all the wage-wedges in 10 broad sectors. I find that the static gains from eliminating wage-wedges tend to be small. In only a few cases are the gain to productivity over 10%, and for most countries the gain is less than 5%. As a comparison I do a similar calculation for the United States. While the U.S. has smaller implied gains (i.e. it has a more efficient allocation of human capital), the differences are miniscule compared to the overall differences in output per worker. The main results assume that there is no unmeasured human capital. If I relax that assumption, the implied gains are even smaller in each country. The main results are also based on wage-workers only, ignoring self-employed workers. Using census data to establish the distribution of all workers across the 10 sectors, I recalculate the gains from reallocation. In general, the results conform to the main results. Gains from reallocation remain below 10% for most countries. These findings do not imply that labor markets operate perfectly within these developing countries. A limit of my approach is that I cannot eliminate all wedges between the value marginal product of human capital and the wage. So there may be large gains to reallocation if these other wedges are removed. Additionally, I only consider static gains from reallocation, ignoring any follow-on effects on capital accumulation or total factor productivity. In a dynamic setting where these factors can adapt to the changing distribution of human capital, the gains of reallocation could be very large. My results suggest that if human capital misallocation is an important part of understanding under-development, then it is because of inefficiencies within sectors themselves or because of strong dynamic spillovers, but not necessarily because of static wedges between sectors.