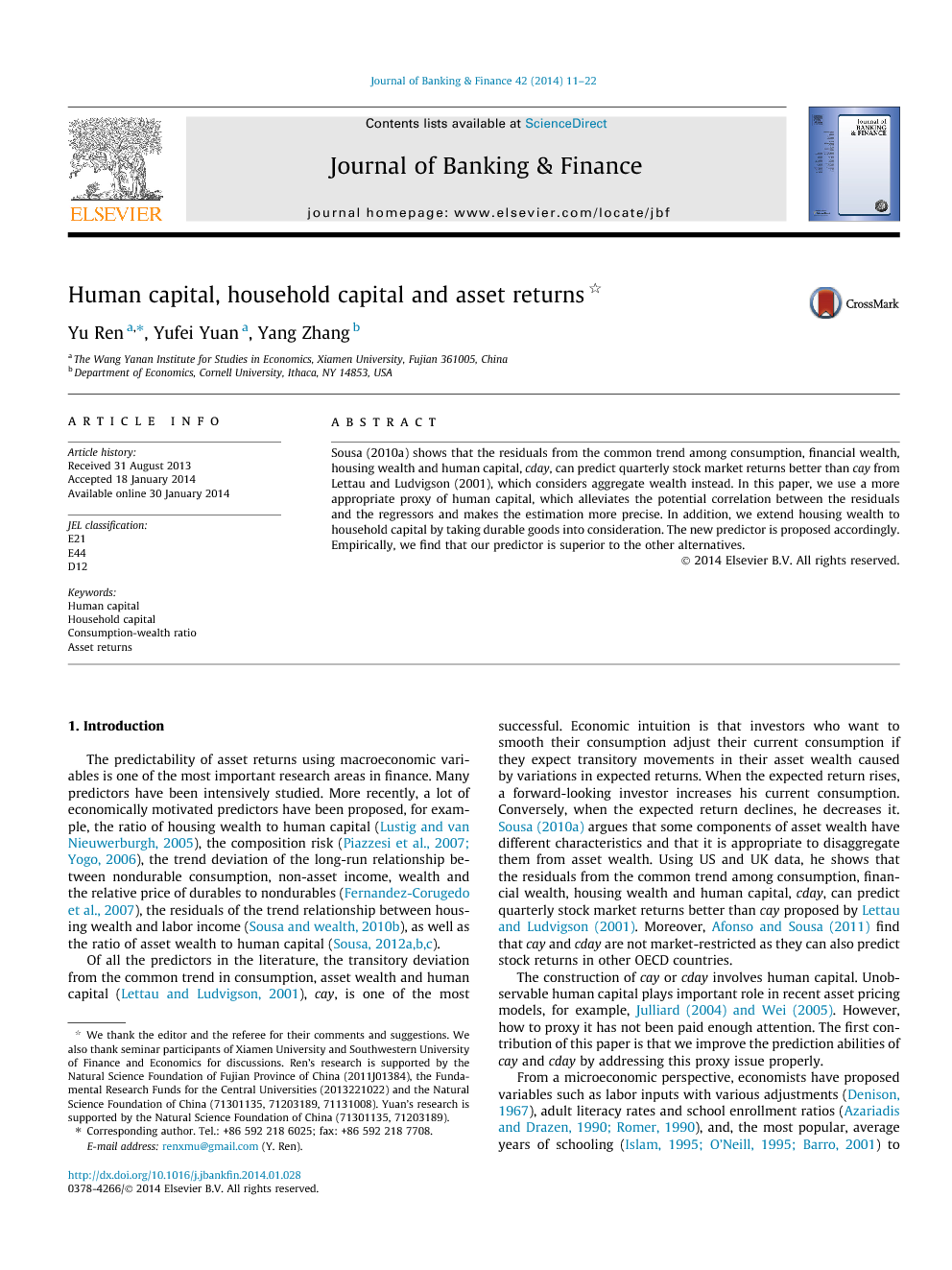 Sousa (2010a) shows that the residuals from the common trend among consumption, financial wealth, housing wealth and human capital, cday, can predict quarterly stock market returns better than cay from Lettau and Ludvigson (2001), which considers aggregate wealth instead. In this paper, we use a more appropriate proxy of human capital, which alleviates the potential correlation between the residuals and the regressors and makes the estimation more precise. In addition, we extend housing wealth to household capital by taking durable goods into consideration. The new predictor is proposed accordingly. Empirically, we find that our predictor is superior to the other alternatives.

In this paper, we improve the prediction power of cay in Lettau and Ludvigson (2001) and of cday in Sousa (2010a). Similar to these two papers, we use budget constraint to derive the cointegrating relationship between consumption and the different components of wealth, and then apply the trend deviation denoted by cadh to predict stock returns. Our predictor, cadh, has superior prediction power over cay and cday in two respects. First, as we use an appropriate proxy for human capital, we avoid potential endogeneity in the DLS regression. Specifically, we use a VAR (1) model to forecast the growth rate of labor income and discount rates, and we sum the current values of all future labor income. This sum is regarded as current human capital. Second, we further explore the importance of wealth composition. We generalize housing wealth as defined in Sousa (2010a) to be household capital, which includes both housing wealth and durable goods. This is because durable goods are quantitatively an important part of aggregate wealth, and they are similar to housing in terms of their liquidity, utility from ownership and income distribution. Empirically, we find that there is a structural change in the data between 1952–1976 and 1977–2011. First, the cointegrating vectors among consumption, financial wealth, household capital and human capital are different for each subsample. This difference reflects a change in the long-run elasticities of consumption with respect to financial wealth, household capital, and human capital, which is corroborated by a change in personal income compositions. Second, the relationship between the growth rates of household capital and consumption is different. In the first subsample, the growth rates of household capital are not significantly associated with the future growth rates of consumption. In the second subsample, the growth rates of household capital are significantly and positively related to the future growth rates of consumption. These two phenomena are consistent with the empirical literature studying the data before and after the mid-1970s. Sousa (2010a) verifies the growth rate relationship and attributes it to the persistence of household assets. We also observe that the growth rates of household capital have significant positive autocorrelation in the second subsample but not in the first one, interestingly consistent with the discussion of Sousa (2010a). There is currently no discussion of any such structural break in US data in the literature. We compare the in-sample and out-of-sample forecasting performances of our predictor, cadh, with cay and cday for the two subsamples. In both subsamples, cadh outperforms the other two. This supports the importance of our human capital proxy in the regression and durable goods in wealth composition. Moreover, the predictive abilities of the three predictors tend to be stronger post 1977. A possible explanation is that the Great Moderation made investors’ expectations more precise.