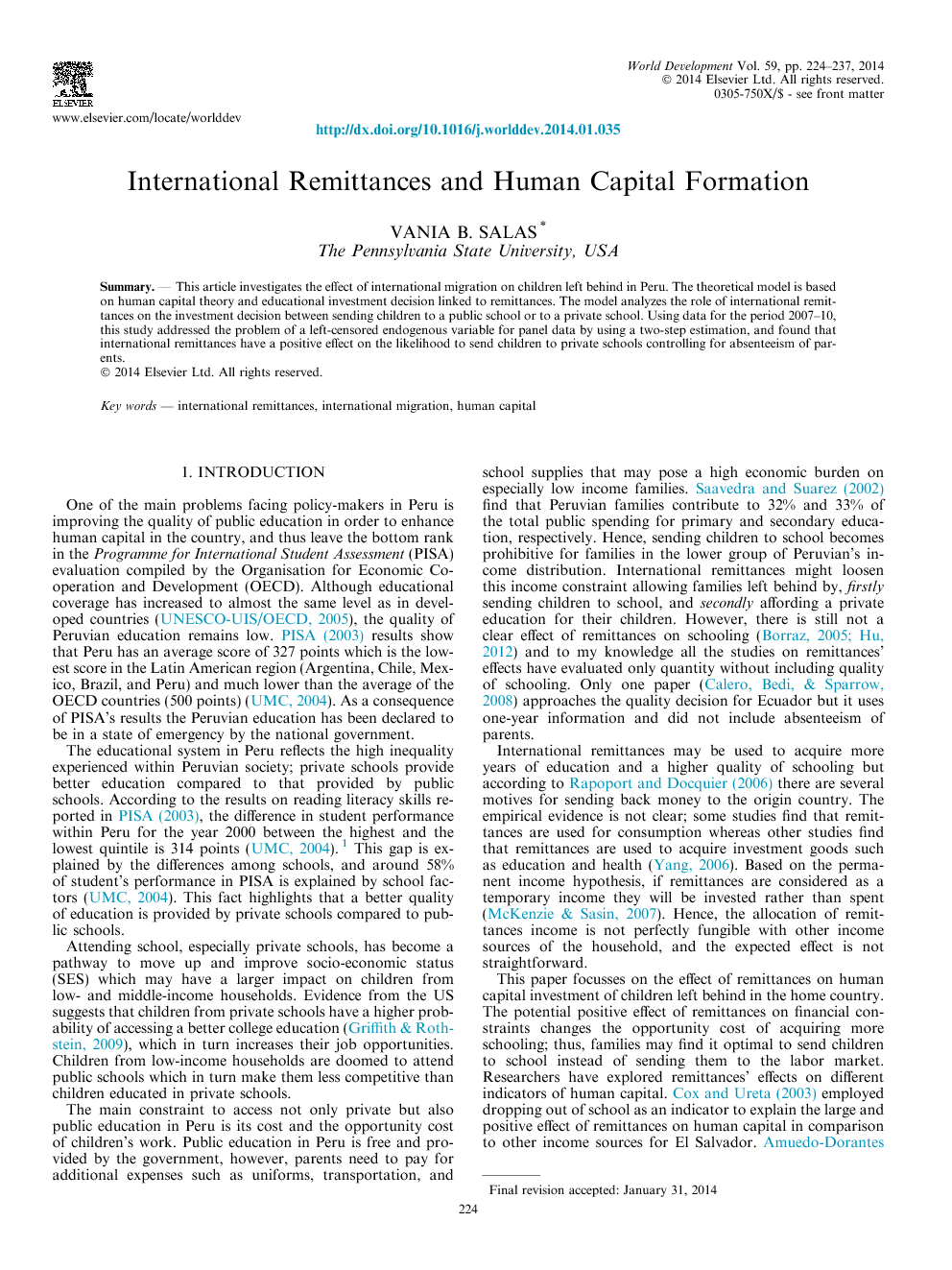 This article investigates the effect of international migration on children left behind in Peru. The theoretical model is based on human capital theory and educational investment decision linked to remittances. The model analyzes the role of international remittances on the investment decision between sending children to a public school or to a private school. Using data for the period 2007–10, this study addressed the problem of a left-censored endogenous variable for panel data by using a two-step estimation, and found that international remittances have a positive effect on the likelihood to send children to private schools controlling for absenteeism of parents.

This research has provided theoretical and empirical analyses of the effect of remittances controlling for absenteeism of parents on the human capital investments on children left behind. Using Peruvian data for the period 2007–10, this study shows that ‘logarithm of international remittances received’ has a statistically significant and positive effect on the human capital investment of children left behind. Unlike previous studies, this research evaluates the effect of international remittances on the probability of acquiring a higher quality of education by sending children to private schools. Much of the literature has focused on the effects of either remittances or migration, and only a quantitative educational outcome has been considered in previous analysis. Migration in Peru, unlike other countries close to the main destination country (US), is undertaken mostly by relatively affluent people; hence the effect of migration and remittances should be evaluated not on quantity but quality of education. Furthermore, education coverage in Peru is at the same level as in developed countries but the quality remains at among the lowest places in international evaluations such as PISA. The results suggest that families receiving remittances are more likely to send their children to private schools. Thus, unlike other studies for Peru, this research finds a positive and statistically significant effect of remittances on human capital which is not only an individual benefit but also a key factor for growth and development of the country. Although, international remittances have an important role on improving human capital, there is little room for policy interventions on private decisions made by receiving-remittances households. However, new financial instruments to reduce transaction costs of remittances can be created by governments and private firms such as the ‘cell phone-based remittance service’ implemented by Kenyan telecom provider (Yang, 2011). Evidence based on Salvadoran migrants in the US shows that reducing transaction fees increases the amount of remittances (Aycinena, Martinez, & Yang, 2010).