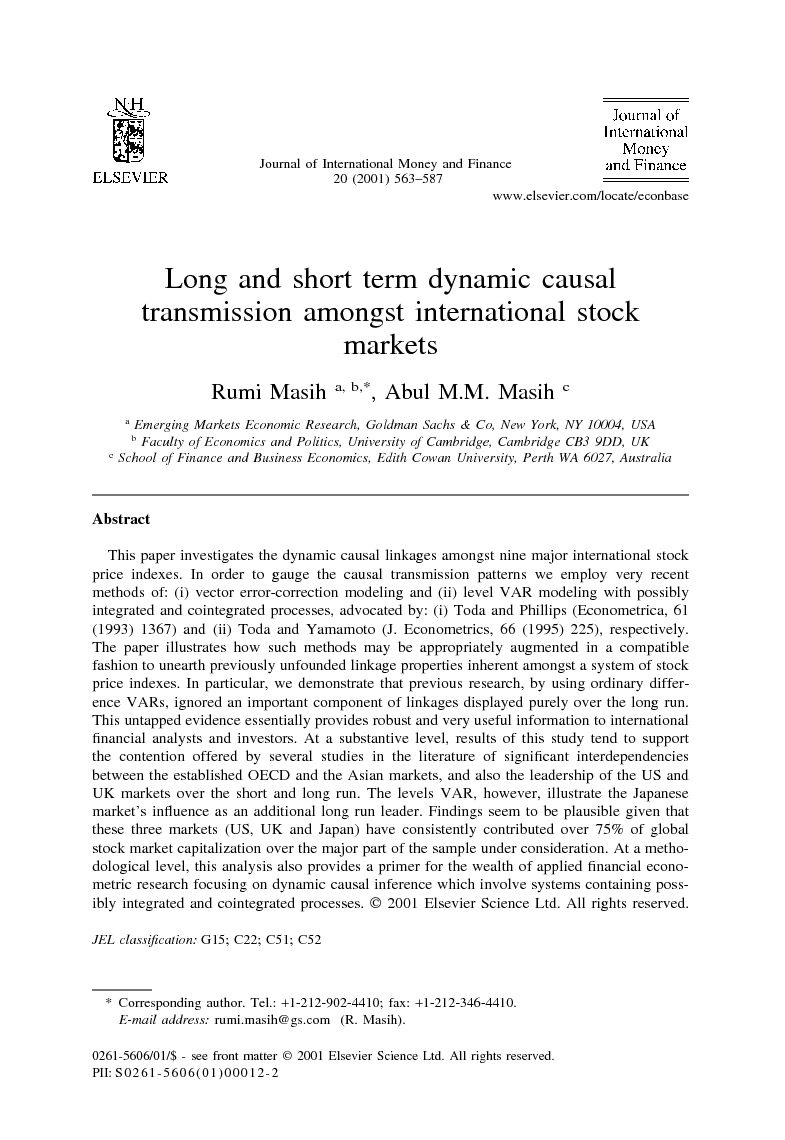 This paper investigates the dynamic causal linkages amongst nine major international stock price indexes. In order to gauge the causal transmission patterns we employ very recent methods of: (i) vector error-correction modeling and (ii) level VAR modeling with possibly integrated and cointegrated processes, advocated by: (i) Toda and Phillips (Econometrica, 61 (1993) 1367) and (ii) Toda and Yamamoto (J. Econometrics, 66 (1995) 225), respectively. The paper illustrates how such methods may be appropriately augmented in a compatible fashion to unearth previously unfounded linkage properties inherent amongst a system of stock price indexes. In particular, we demonstrate that previous research, by using ordinary difference VARs, ignored an important component of linkages displayed purely over the long run. This untapped evidence essentially provides robust and very useful information to international financial analysts and investors. At a substantive level, results of this study tend to support the contention offered by several studies in the literature of significant interdependencies between the established OECD and the Asian markets, and also the leadership of the US and UK markets over the short and long run. The levels VAR, however, illustrate the Japanese market's influence as an additional long run leader. Findings seem to be plausible given that these three markets (US, UK and Japan) have consistently contributed over 75% of global stock market capitalization over the major part of the sample under consideration. At a methodological level, this analysis also provides a primer for the wealth of applied financial econometric research focusing on dynamic causal inference which involve systems containing possibly integrated and cointegrated processes.

This paper investigates the dynamic causal linkages among nine major international stock markets. A large proportion of the empirical literature concerning stock market dynamics which employs times series techniques can be broadly classified into two groups. One group follows the work initiated by Kasa (1992) which uses multivariate cointegration techniques to examine the number of common stochastic trends in a system of national stock market prices. This method provides insights into how integrated markets have become and the popular intuitive notion of whether or not stock markets share long run relationships over time. Relevant studies include Chung and Liu (1994) and Corhay et al. (1995) on Pacific-Rim country stock markets, Blackman et al. (1994) on 17 OECD markets, Jeon and von Furstenberg (1990) and Kwan et al. (1995) on major world equity markets. The second group has attempted to investigate lead–lag relationships among prices of national stock markets (Eun and Shim, 1989, Cheung and Mak, 1992, Malliaris and Urrutia, 1992, Arshanapalli and Doukas, 1993, Smithi et al., 1993 and Brocato, 1994). Many of these works, despite the contributions they have made in demonstrating the interdependencies and lead–lag relationships among the stock markets, suffer from the following limitations. Firstly, they employed simple bivariate lead–lag relationships between two markets, or standard Granger F-tests in a VAR framework which are useful only in capturing short run temporal causality. Even those studies that employed a multivariate framework (for example, Mathur and Subrahmanyam, 1990, on linkages between Nordic and US stock markets) have done so using ordinary first-difference VARs, not taking into account any presence of long run relationships inherent in the multivariate system. Secondly, in the econometric literature there now exist many alternative estimation methods that permit valid testing of causal inferences among variables which are known to be cointegrated. Therefore, there is an urgent need to undertake a comparative analysis of a number of estimators in order to validate the robustness of the results of a particular estimator. While this issue has been stressed in the theoretical literature (Phillips, 1991), only a limited number of studies in applied research have compared the results of different estimators (Gonzalo, 1994 and Moore and Copeland, 1995). Finally, in many cases, the statistical results have not been either adequately backed up by economic intuition and/or the implications of the statistical results have not been clearly spelt out. Our major aim in this study is to make an attempt to extend the existing literature by focusing on the patterns of dynamic causal linkages among nine stock markets (four developed and five emerging) while addressing the above three limitations. This paper is organized in the following manner: Section 2 briefly describes the theoretical basis. The methodology to be adopted is then presented in Section 3 with special reference to how the alternative methods may be used in a complementary fashion to discern the short run and long run dynamic causal transmission among stock markets. Section 4 contains a discussion of the data, the application, and the estimation results. The implications of the empirical results are highlighted in Section 5. Finally, the conclusions and limitations of the study are presented in Section 6.