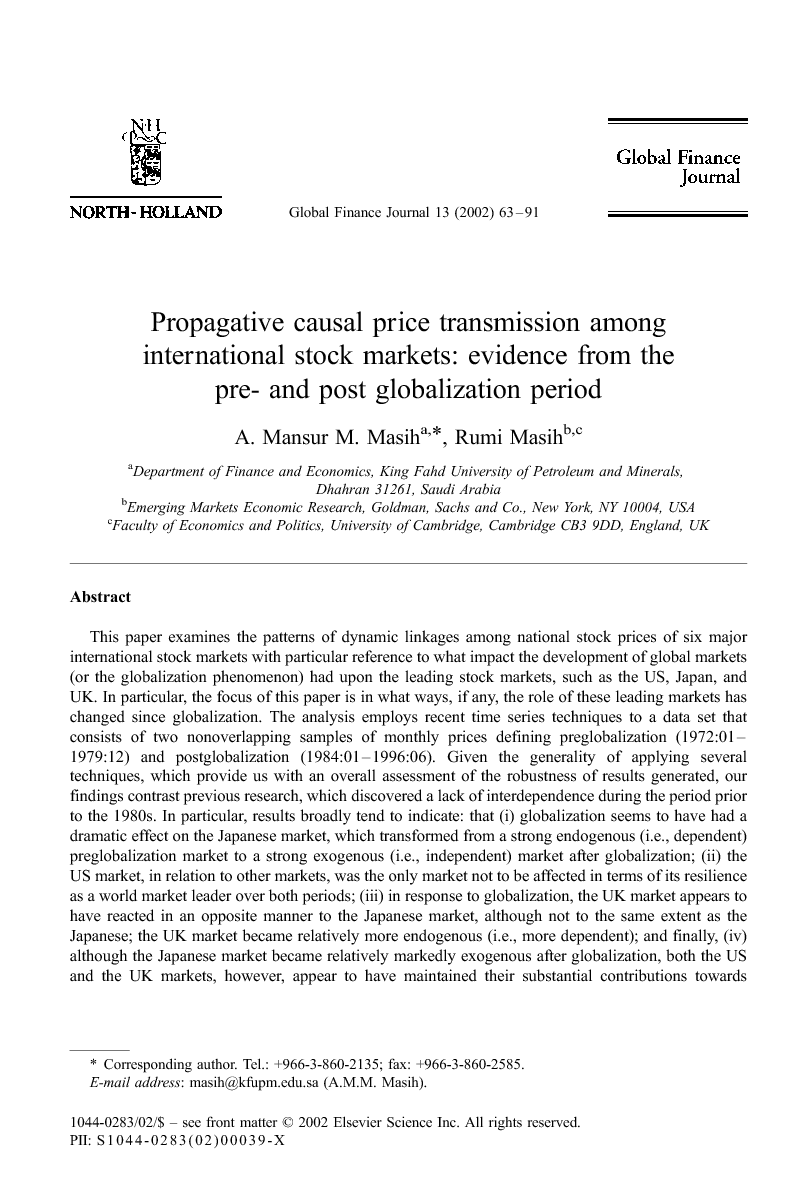 This paper examines the patterns of dynamic linkages among national stock prices of six major international stock markets with particular reference to what impact the development of global markets (or the globalization phenomenon) had upon the leading stock markets, such as the US, Japan, and UK. In particular, the focus of this paper is in what ways, if any, the role of these leading markets has changed since globalization. The analysis employs recent time series techniques to a data set that consists of two nonoverlapping samples of monthly prices defining preglobalization (1972:01–1979:12) and postglobalization (1984:01–1996:06). Given the generality of applying several techniques, which provide us with an overall assessment of the robustness of results generated, our findings contrast previous research, which discovered a lack of interdependence during the period prior to the 1980s. In particular, results broadly tend to indicate: that (i) globalization seems to have had a dramatic effect on the Japanese market, which transformed from a strong endogenous (i.e., dependent) preglobalization market to a strong exogenous (i.e., independent) market after globalization; (ii) the US market, in relation to other markets, was the only market not to be affected in terms of its resilience as a world market leader over both periods; (iii) in response to globalization, the UK market appears to have reacted in an opposite manner to the Japanese market, although not to the same extent as the Japanese; the UK market became relatively more endogenous (i.e., more dependent); and finally, (iv) although the Japanese market became relatively markedly exogenous after globalization, both the US and the UK markets, however, appear to have maintained their substantial contributions towards explaining the fluctuations of most of the other markets in both periods.

Over the past decade, the underlying characteristics of international stock markets have changed to a dramatic extent. There have been several reasons postulated for this change: (i) since the early 1980s, in particular, there has been a stronger cross-exchange of market covariation; (ii) there appears to be greater ‘psychological contagion’ between markets, a bursting of a strong rational speculative bubble (see Hardouvelis, 1988); and (iii) due to the technology explosion, the speed with which information can be transmitted from one market to another has been greatly improved. In tune with related research, there have also been several studies, which have served to highlight a major hypothesis of great importance to financial analysts, which underlies “that existing financial linkages connecting stock markets have (since globalization) become much more robust and can magnify cross-market adjustments to exogenous disturbances” (Brocato, 1994, p. 645) (italics added). In the financial literature, this phenomenon has often been referred to as the globalization of international stock markets (see, inter alia, Blackman et al., 1994, Brocato, 1994 and Mathur & Subrahmanyam, 1990). Globalization has also brought changes in the financial environment, including the increased flow of capital across national boundaries due to the relaxation of controls on asset market transactions, improvements in the flow of information and a reduction in the transaction costs themselves, and increased potential gains from diversification of investments on an international level. These changes have, as a result, provoked much empirical research focusing on the short-run linkages between markets at an international level and mostly involving sample periods following globalization in order to gain a deeper insight into the propagation mechanism underlying stock market fluctuations.1 Although investigations into the dynamic linkages of individual markets over time and across markets are of crucial importance to investors and financial policymakers, the need for an analysis in the face of these rapid changes brought about through globalization becomes all the more relevant. A number of studies have employed, due to data limitations or methodological drawbacks, simple bivariate lead–lag relationships among two markets, or standard Granger F tests in a VAR framework, which are only useful in capturing short-run temporal causality. 2 While examinations of bivariate relationships may provide additional insight, they are not entirely useful for purposes of policy and serve at best as a prerequisite for a more thorough analysis of relationships amongst stock markets in a multivariate setting. 3 Recent important methodological studies by King, Plosser, Stock, and Watson (1991) and Toda and Phillips (1993) have shown that in the presence of cointegration, VARs must be augmented by constraints via error-correction mechanisms, which account for any long-term information essentially lost through differencing. Our purpose in this paper is to assess the dynamic linkages (in terms of lead–lag relationships) among national stock prices of six major international stock markets with particular reference to what impact the development of global markets(or the globalization phenomenon) had upon the leading stock markets, such as US, Japan, and UK. In particular, the focus of this paper is in what ways, if any, the role of these leading markets has changed since globalization. Empirically, we use monthly closing prices of six major international stock markets represented by stock price indexes of the United States, Japan, United Kingdom, Germany, Australia, and Canada and define two nonoverlapping samples describing periods of ‘preglobalization’ (January 1972–December 1979) and ‘postglobalization’ (January 1984–June 1996).4 While much of the previous research stress the need to test for the number of common stochastic trends Blackman et al., 1994 and Kasa, 1992, we extend the analysis by using six-dimensional vector error-correction models (VECM), variance decompositions (VDCS) and impulse response functions in order to gain insight into the short- and long-run lead–lag or causal relationships between these stock markets.5 The dynamic VECM representation provides us with a framework to test for the temporal causal dynamics (in the Granger sense) among the stock price markets through both short-run and error-correction channels of causation (see Granger, 1986 and Granger, 1988). The paper is organised in the following manner. Section 2 contains a review to the wide-ranging literature surrounding this issue. The econometric techniques, methodology, and approach to modelling are presented in Section 3. A brief description of the data and discussion of the estimation results are in Section 4. Further intuitive explanations of the major statistical results are given in Section 5. A summary, broad but major international macroeconomic implications, and conclusions of the study are made in Section 6.