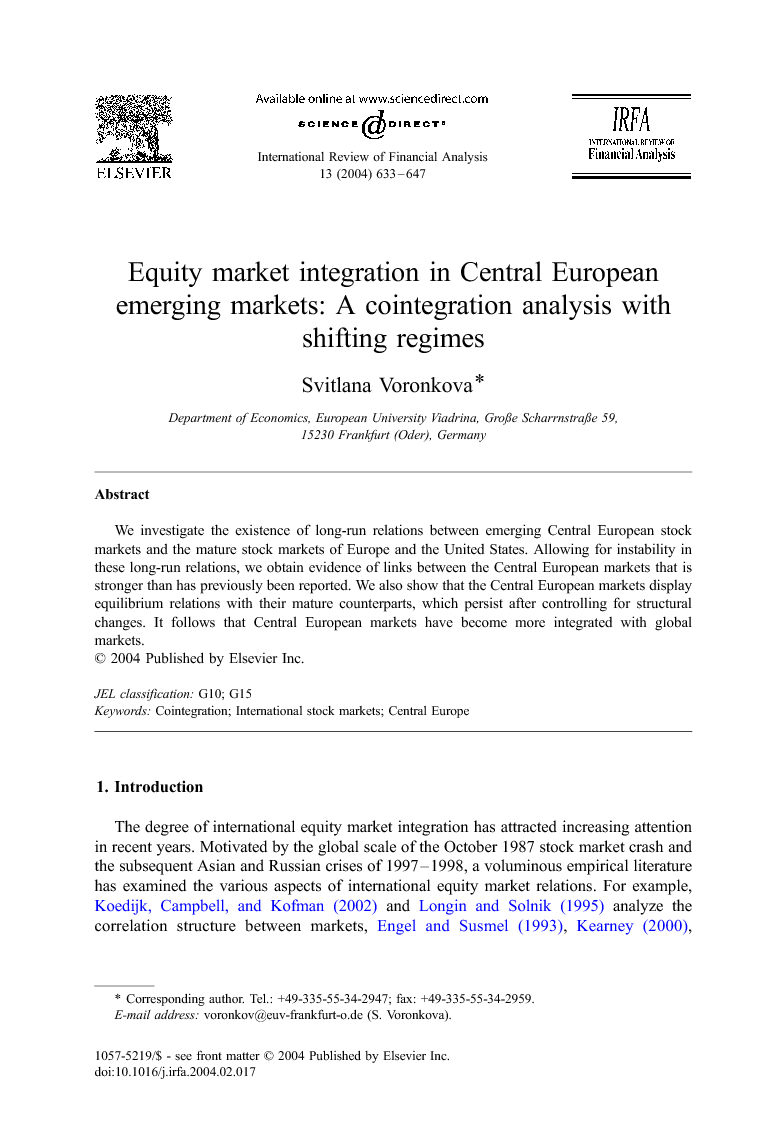 The degree of international equity market integration has attracted increasing attention in recent years. Motivated by the global scale of the October 1987 stock market crash and the subsequent Asian and Russian crises of 1997–1998, a voluminous empirical literature has examined the various aspects of international equity market relations. For example, Koedijk, Campbell, and Kofman (2002) and Longin and Solnik (1995) analyze the correlation structure between markets, Engel and Susmel (1993), Kearney (2000), Koutmos and Booth (1995), and Ng (2000) investigate volatility spillovers across markets, De Jong and de Roon (2001) report tests of the important international asset pricing models, and Claessens and Forbes (2001) and Rigobon (1999) study the degree of contagion across markets. In addition to these studies, the cointegration methodology developed by Engle and Granger (1987) and Johansen (1988) has given rise to numerous studies of long-run comovements between stock markets, which have important implications for portfolio theory and diversification issues. Investigations into the existence of long-run stock market relations have traditionally focused on the mature markets of Western Europe and the United States and the emerging markets of Asia and Latin America. For example, Francis and Leachman (1998), Kasa (1992) and Richards (1995) have examined the existence of cointegration relations between the developed European and U.S. markets, Arshanapalli and Doukas (1996), Manning (2002), and Phylaktis (1999) have done similarly for the Asian markets, while Arbeláez, Urrutia, and Abbas (2001), Chen, Firth, and Rui (2002), and Choudhry (1997) have examined the Latin American markets. The developing markets of Central and Eastern (CE) Europe have been investigated to a smaller extent. Linne (1998) reports evidence of cointegration between the CE markets, although no cointegration relations with mature markets are found. MacDonald (2001) analyzes the stock market indices of CE countries, as a group, against each of three developed markets (Britain, Germany, and the United States). He documents significant long-run relations for each of the groupings. In contrast to this, however, Gilmore and McManus (2002) find no long-run links between the three CE markets and the United States. These authors focus exclusively on the interactions with the U.S. market, leaving out any connections with the important European stock markets. Jochum, Kirchgässner, and Platek (1999) scrutinize the effect of the 1997–1998 Russian crises on the long-run relations between the Vyshegrad countries (the Czech Republic, Hungary, and Poland), Russia, and the United Sates. Bivariate cointegration relations found in the pre-crisis period cease for all but two pairs of markets due to the predominance of short-run dynamics in the post-crisis period. Relying on the historical performance of the markets and the results of principal component analysis, they assume that a change in the long-run relations occurred on September 1, 1997. This approach, however, may suffer from exogenously imposed assumptions about the data generating process. The existing literature therefore arrives at conflicting conclusions with regard to the presence of long-run links between the emerging European stock markets and their mature counterparts. This induces us to study further the patterns of these relations because of their implications for potential diversification benefits. In this paper, we contribute to the literature in two ways. First, we address a common assumption shared by all but one of the studies referred to above. With the exception of Jochum et al. (1999), these studies assume stable, long-run relations. But recent studies have highlighted the time-varying nature of intermarket relations Bekaert & Harvey, 1995 and Gelos & Sahay, 2000. Violation of the stability assumption is especially likely to occur over long periods, which constitute the focus of cointegration studies. Campos, Ericcson, and Hendry (1996) and Gregory and Hansen (1996) show that structural breaks have important implications for cointegration analysis because they deteriorate the power of cointegration tests and lead to the underrejection of the null hypothesis of no cointegration. One may erroneously conclude, therefore, that cointegration relations do not exist, although they are present with structural changes. For this reason, we employ the Gregory–Hansen methodology that takes account of the possibility of instability in long-run relations. This methodology allows a more general specification of long-run relations than conventional cointegration tests do, while also allowing the estimation of the date of the structural change, rather than arbitrarily assuming when it takes place on the basis of market history. We compare the results from traditional cointegration procedures with our findings provided by the Gregory–Hansen methodology, and we analyze whether the latter helps us to uncover any additional long-run relations that would be overlooked by the more conventional techniques. Second, we exploit a comprehensive data set that includes daily data for the three most advanced emerging CE stock markets and four developed markets over a period of almost 10 years (September 7, 1993 to April 30, 2002). This is a substantial interval for the newly reestablished CE markets. Several studies document that the CE markets became increasingly correlated with the developed markets in the late 1990s Gelos & Sahay, 2000, Gilmor & McManus, 2002 and MacDonald, 2001. Our sample, which covers this period, allows us to analyze whether the shift in short-run links occurs in tandem with a change in the pattern of long-run relations. Our results show that once we allow for a more general specification of equilibrium relations, we obtain stronger evidence in support of their presence. The Gregory–Hansen procedure reveals several long-run relations (one within the group of the CE stock markets and five between the emerging and developed markets) omitted by regular cointegration tests. This provides a stronger indication of cointegration relations between the emerging CE and the developed markets than has been documented by previous researchers, and it implies that previously reported diversification benefits for foreign investors with long horizons in these markets might be overstated. The reminder of our paper is structured as follows. The next section presents the data. Section 3 outlines the methodology employed when testing for the nonstationarity of the price series and cointegration. The results of unit root tests, bivariate, and multivariate cointegration tests, as well as the estimated cointegration vectors and error-correction models (ECMs), are described in Section 4. Section 5 summarises our main arguments and draws together our conclusions.